Blasting Their Way to Victory! 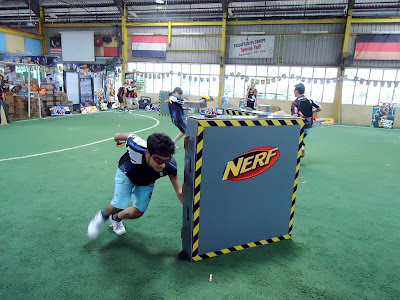 Hasbro Malaysia's first official NERF Dart Tag Tournament took place over the weekend of 8 & 9 September 2012 at Allrounder Indoor Soccer Futsal Centre in Section 19, Petaling Jaya. The Kids Category session (ages 8 to 13 years) was conducted on Saturday 8 September whilst the Open Category session took place on the following day. The tournament sessions kicked-off at 2pm on both days, preceded by practice matches in the morning allowing players to test the NERF Dart Tag blasters, scope out the arena and better understand the game format.

The futsal centre was abuzz early on Saturday morning as kids showed up with their friends and family to check-in for the tournament and take advantage of the practice match sessions. A full range of the latest NERF Dart Tag blasters were provided to each team together with NERF jerseys in blue or orange to denote teams . A total of 11 teams signed-in to compete in the Kids Category:

Round-robin matches of 3 minutes duration were conducted whereby each team played off against 3 other teams to qualify for the semi-finals. In NERF Dart Tag games, a player is tagged when a velcro dart sticks to a player's jersey. Tagged players then have to return to their team's penalty area to serve a 10 second countdown before rejoining the match. Match scoring was awarded to the winning team based on number of tags against opposing players and capturing the other team's flag.

After 16 qualification matches, the 4 teams shortlisted for the semi-finals were the Knights, Star Blade, Death Dealers and Deathbringerz. The first match-up between team Knights and Death Dealers was fairly balanced as players furiously tagged each other and neither team managed to capture their opponent's flags. The Knights prevailed to win with more tags against the Death Dealers. The tournament continued with Star Blade "overkilling" Deathbringerz, bring them to face-off against the Knights. Through teamwork and strategy, the Knights won the match by capturing Star Blade's flag and thereby claimed the Grand Prize plus championship title for NERF Dart Tag Tournament 2012, Kids Category.


The following day's Open Category Tournament brought 8 competing teams comprising:
Similarly to the Kids Category, each team played off against 3 different teams to qualify for the semi-finals, starting with the Droids versus Roughneck Zero. Team Roughneck Zero virtually blasted through their opposition, earning maximum scores on each of their matches through "overkills" and flag captures. The other 3 qualifying teams of the Droids, 1T and EIR came through on fairly equal grounds. All teams now played off carefully and calculated with more conservative tactics rather than brazen charges seen earlier in the day. Ultimately Roughneck Zero defeated EIR whilst Droids overcame 1T, bringing back together the 2 teams which kicked-off the qualifiers!

Learning from their prior defeat by Roughneck Zero, the Droids successfully fended off the Roughnecks to protect their flag this time around. By time-out, neither team prevailed as the match was a draw based on equal number of player tags. As a winner had to be determined, both teams played off by "penalty shot" with each team's player taking turns to successfully tag a target. Team Roughneck Zero's sharpshooting skills paid off as they claimed the the championship title for NERF Dart Tag Tournament 2012, Open Category and took home a huge hamper of Hasbro prizes.


﻿ Hasbro Malaysia's personnel also jumped-in for a standalone match to showcase their skills with NERF and build team comaradie. The extended match saw various tactics and antics including what seemed like a half-time team meeting whilst the clock was still running! Victory was eventually claimed by blue team, despite loosing and subsequently reclaiming their flag.


Side activities at the tournament venue included demonstration of the latest NERF blasters such as the N-Strike Elite series with a firing range being setup. Everyone also had the opportunity to test fire the NERF Super Soaker series of water blasters, of which some of the players took the chance to spray themselves to cool off after sweaty tournament matches. An assortment of NERF blasters and accessories were available for sale with NERF guide books and freebies given away to everyone at the tournament venue.

Many thanks to Hasbro Malaysia for organising the tournament and supporting the local NERF community with such generous prizes. Congratulations to all winners for Blasting their Way to Victory! 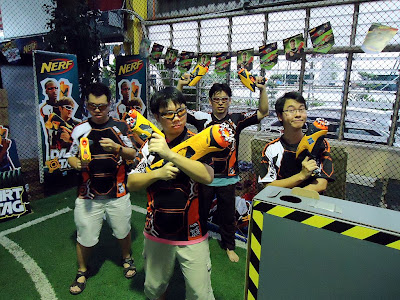 It's NERF or Nothin'!

NERF is associated trademarks are copyright to Hasbro Inc. used with permission by Outpost Events as the appointed agency by Hasbro Malaysia to organise the NERF Dart Tag Tournament Malaysia 2012.

Ready for some intense NERF action this weekend? Does your team have the right mix of speed, agility, strategy and teamwork to blast your way to victory? Read up on the tournament format below and prepare yourselves accordingly. 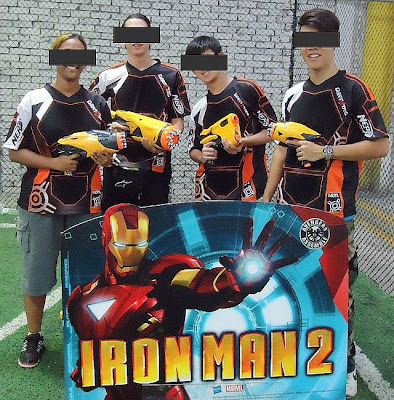 Format:
Round robin, each team compete against 3 other teams to score points to qualify for semi-finals.

Game mechanics for each match of 3 minutes duration:

1. Players of each team start at designated "base".

2. Upon commencement sound-off by game marshal, players may proceed to attack/defend against opposing team according to their strategy. 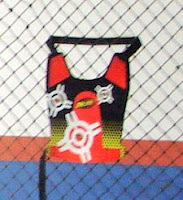 3. A velcro dart sticking on a player's jersey is counted as a "tag". "Tagged" players immediately hold up their blaster above heads (signify "don't shoot me") and proceed back to team "penalty zone" / respawn point. Upon reaching the "penalty zone", the player must remove the velcro dart from jersey and place on "penalty zone" velcro vest to signify 1 tag scored by opposing team. Player then starts 10 second timer penalty countdown before they can rejoin the game.

﻿ 4. To capture an opposing teams "flag", the attacking players must "tag" the defending team's "VIP" with at least 3 darts from minimum distance denoted by court perimeter markings. Once the "VIP" has been tagged, the attacking team players may enter the defending team perimeter and claim the "flag" to return to their "VIP". If a player is "tagged" while carrying the "flag", that player must immediately drop the "flag" and return to his team's "penalty zone" to serve 10 second penalty countdown. Any player may then pick up the "flag" to return or capture. The team with their opponents "flag" at end of match scores bonus points.

5. Once a "flag" has been captured and re-located to the capturing team's "VIP", the "flag" may only be recaptured under the same conditions, i.e. "tag" opposing team's "VIP" before entry to claim a "flag". A player may only carry 1 "flag" at any time.
6. Players may reload ammo darts only from the ammo belts, placed at team "base". Darts on ground may not be collected by players for re-use during match time.

7. Players who have exhausted all ammo darts in their blasters and with no refill ammo left are considered to have ended their gameplay and to immediately return their blasters to base then raise their hands and move stand behind the "VIP". They are no longer targets to be "tagged".

8. Game ends after 3 minutes, or complete discharge of all legal ammo in arena by both teams.

9. Game marshals will call out "tagged" players by team colour and jersey number, e.g. blue 1, orange 3, etc. Players are to remember their jersey colour and number for each match.

10. Players in breach of the above rules of play may instructed to exit game or disqualified by game marshals.

4 highest scoring teams determined by cumulative scoring from 3 rounds will enter semi-finals. In event of even scoring, tie-breakers will be teams with the highest number of captured "flags", then highest number of "tags".

Players are to collect darts from ground between each match and reload their blasters & ammo belts to reset for their match.

Players should NOT run blindly within arena and beware of safety considerations at all times.

Please heed instructions from game marshals or face the "axe" from matches by our NERF N-Forcer! 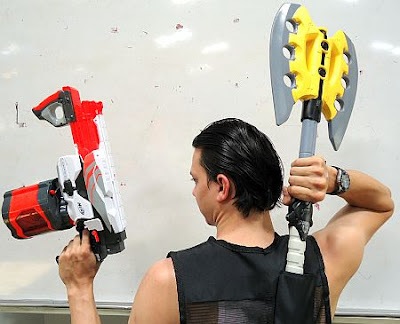 More detailed instructions on the matches will be made available in tournament day.

NOW, are your NERFers ready? Plan your team strategy in advance. But many well-laid plans fly out the window the moment action starts, so you may wish to test theories first in practice matches prior to tournament time. Standby for Tournament Day itinerary coming soon.

Excited to join the action? It's not too late. Just purchase minimum RM50 of new NERF Elite range and Vortex Pyragon products to participate in the Open Category. Register online here.

NERF and its associated trade names are copyright to Hasbro Inc. used with permission by Outpost Events as the appointed agency by Hasbro Malaysia to organise the NERF Dart Tag Tournament Malaysia 2012.
Posted by Outpost Productions No comments: