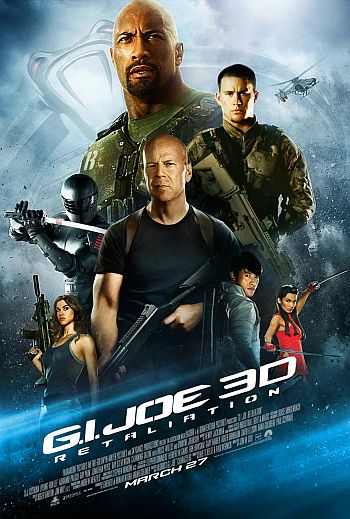 G.I. Joe : Retaliation is the sequel to G.I. Joe Rise of the Cobra from 2009, the first live-action film of Hasbro's G.I. Joe franchise which enamored many boys from the 80's with cartoons, comics and toys. G.I. Joe is an elite military unit tasked to safeguard the world against terrorist organisations like Cobra.


At the end of the Rise of Cobra, Cobra Commander was captured by the G.I. Joes and locked away in a secret prison. However, Cobra's master of disguise, Zartan, had infiltrated the white house and successfully impersonated the President of United States. Now in Retaliation, Zartan frames the Joes and orders their termination. Only a handful of Joes survive, led by Dwayne “The Rock” Johnson as Roadblock and determined to strike back. Together with Flint and Lady Jaye, Roadblock reunites with Snake Eyes and recruits other unlikely allies such as Jinx, cousin to the assassin Storm Shadow, and General (retired) Joe Colton, the "original" Joe himself played by veteran action hero, Bruce Willis.

Meanwhile, Cobra has their deadly saboteur, Firefly, hot on the heels of the Joes whilst completing new weapons to take over the world. Way to go Year of the Snake! 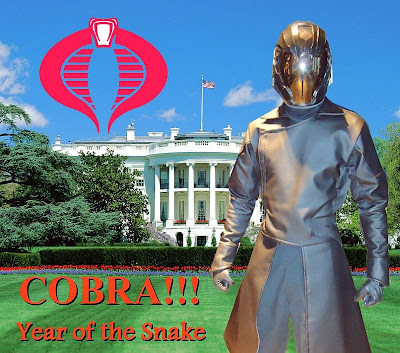 
How will the Joes retaliate against such overwhelming odds? Find out in G.I. Joe Retaliation, now screening at cinemas nationwide.

The Outpost Movie Recon Team (MRT) has identified a few avenues for G.I. Joe fans to get into the action with the following contests and promos for the movie: 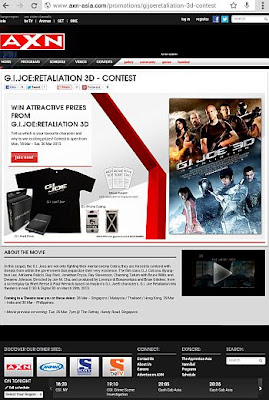 AXN is never out of the action and what spells action more than the Joes. Subscribers to AXN can enter this online contest by 30 March to win G.I. Joe merchandise. 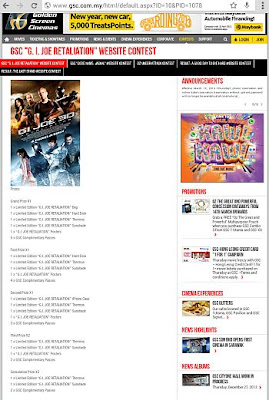 Fret not if you don't subscribe to AXN, GSC is also giving out goodies in their GI Joe website contest. 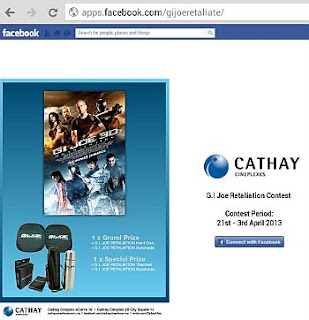 Or if you rather use Facebook, enter through Cathay Cineplexes contest app.

Want to bring home the action? Pick-up some G.I. Joe action figures and vehicles from Toys R Us. 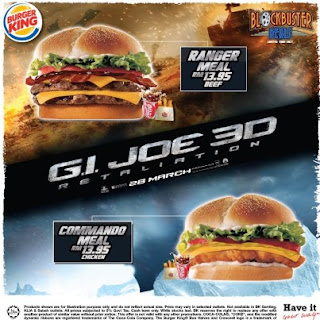 Hungry after all the explosions and slogan writing? Head on over to Burger King for their special G I Joe Ranger & Commando meals. Purchase 2 meals to get a TGV movie voucher (while stocks last).


The Outpost Command Crew was privileged to have caught an early preview of G.I. Joe Retaliation in IMAX 3D and gives the movie a high-5. Retaliation by Jon M Chu is distinctly different from Stephen Sommers Rise of Cobra, which could have been felt much like a live-action cartoon with enough non-stop explosions to rattle loose fillings from your teeth. So much so that most of the preceding movie cast had been dropped with only Snake Eyes and Duke returning in favour of Dwayve Johnson's Roadblock to lead the new cast. Retaliation also injects more real world feel into the action by departing from the tech-OD of sonic weapons, accelerator suits, and particle cannons.

It's back to guns with bullets and tanks which hiss fumes (pun intended!), which perhaps adds to the high-action sequences by making them more rooted in reality and therefore believable... well, if parrying bullets with a sword comes as believable! Oh, and Cobra Commander never looked more cool; we fairly sure director Jon M Chu must be a Cobra fan at heart (and if you want to join Cobra Special Forces, head over here). After a 9-month delay for 3D conversion, G.I. Joe Retaliation provides a great action movie experience in IMAX 3D, and probably other 3D and 2D (though we can't really say for sure until we've seen it again on these formats). 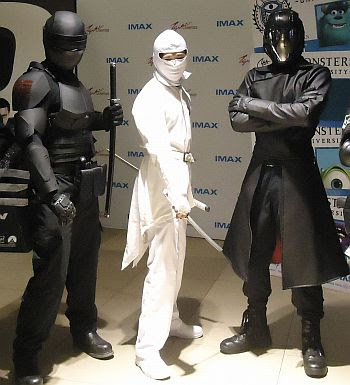 Oh, and we had some childish moments screaming "COBRA!" while cosplaying; sorry no "YO JOE!" since Snake Eyes just doesn't say anything...


Catch some G.I. Joe live-action this Sunday 31 March 2013, 1300 hours at Tropicana City Mall. Plus take the change to take part in Hasbro's NERF Challenge at the Toys R Us Toy Fair on the main concourse for the chance to take up the latest NERF N-Strike Elite blasters and other cool giveaways. 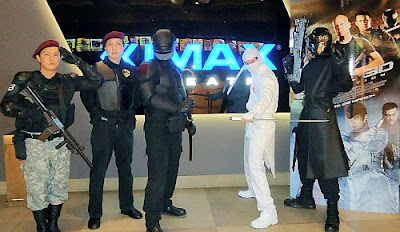 Standby for Outpost MRT's next feature...

Disclaimer: G.I. Joe and its associated characters are copyright to Hasbro Inc. referenced here for fan service announcements without intent to infringe.