Bringing The Force to LEGOLAND Malaysia 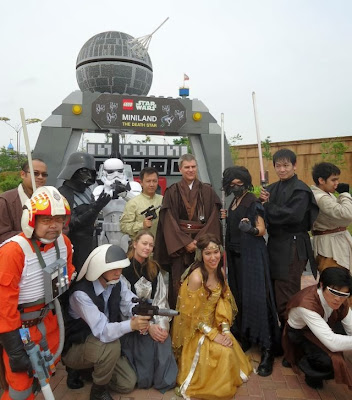 Recently the Outpost Movie Recon Team (MRT) participated in expeditions to LEGOLAND Malaysia in conjunction with launch of the Star Wars themed attractions. LEGOLAND Malaysia was officially opened in September 2012 and located at Nusajaya, Johor within the Iskandar development corridor. It is the first LEGOLAND theme park in Asia with over 40 interactive rides, show and attractions  The park comprises several thematic zones related to LEGO's major product lines such as Kingdoms, City, Technic, etc., circling the MINILAND centrepiece attraction where over 30 million LEGO bricks were used to recreate some of Asia's landmarks such as KLCC twin towers, Beijing's Forbidden City, Cambodia's Angkor Wat, India's Taj Mahal and more. Find out more from the official LEGOLAND Malaysia website.

Members of the media were also treated to a lightsaber duel performance by members of Force Arts Stunt Team (FAST), before heading outdoors to tour the attraction highlight. Read more from the New Straits Times and The Star.

Centrepiece to the Star Wars attraction in MINILAND is the Death Star model floating like a grey moon. The 2.6 diameter model weighs close to 800kg comprising over 750,000 LEGO bricks and taking 5 months to built. Encircling the Death Star is a Rebel X-Wing starfighter pursued by Imperial TIE Figthers.

Accompanying this massive model are several LEGO dioramas depicting various scenes from the Classic Trilogy which took place in the Death Star, such as the epic duel between Obi-Wan Kenobi and Darth Vader in A New Hope, Luke Skywalker vs. The Emperor in Return of the Jedi, etc. Check out photos of the Star Wars attractions below: 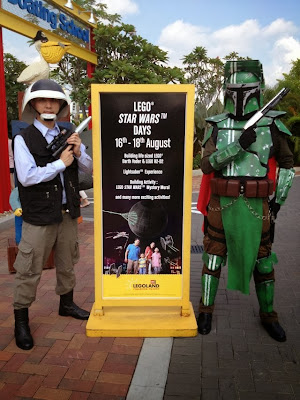 Possibly comprising the largest contingent of 501st Legion members in Asia, each day kicked off with an Imperial March lead by Darth Vader accompanied by ranks of Stormtroopers. Balancing The Force, Jedi and other lightsaber wielders from FAST and Fightsaber Singapore mirrored the Imperials, albeit in lesser numbers. 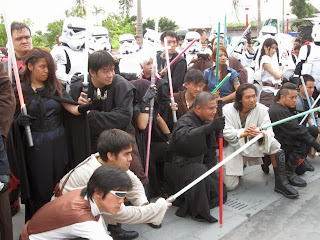 Throughout the day, costumers roamed the park providing photo opportunities with Star Wars and LEGO fans. Park visitors were also given "quest cards" leading them to the various Star Wars activities, collecting stamps to redeem giveaways by end of the day. FAST and Fightsaber also entertained the crowd with lightsaber performances and demonstrations in the LEGO City stage. 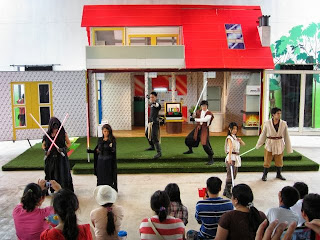 LEGO Star Wars products were aplenty with a dedicated temporary shop setup at MINILAND. As the largest LEGO shop in Asia, much LEGO branded merchandise such as key chains, ice trays, display cases, apparel, etc. is also available but seldom found anywhere else. There is also opportunity to buy LEGO bricks by weight and customising your own mini-figures! However most merchandise are at regular prices comparable to local toy stores, except for occasional sale items. 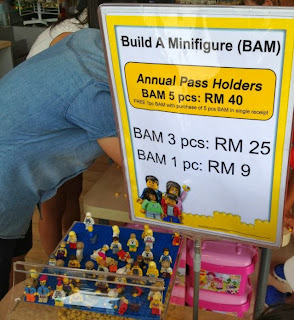 To complete the Outpost MRT's mission report, we include some basic coverage on the regular LEGOLAND attractions as follows:

Note that the Death Star attraction is only scheduled to remain in LEGOLAND Malaysia for approximately 6 months before being shipped off to another park. Based on that timing, Star Wars LEGO fans should plan their visit by January 2014.

For loyal Outpost fans, we are giving away a pair of LEGOLAND Malaysia tickets! Participate with just a few clicks below via PunchTab:

3. Winner will be randomly selected amongst qualified participants. Each entry method via Punchtab increases chances for selection.

Disclaimer: LEGO, Star Wars, and all trademarks are copyright to their respective owners, referenced here for fan service announcements without intent to infringe.

Towards the tail end of Hollywood summer season, choices for our kind of fan movies to feature were limited. So the Outpost Movie Recon Team (MRT) undertook an Away Mission instead to the Singapore Toys Games and Comics Convention (STGCC). Held this year again in Marina Bay Sands Convention Centre, STGCC was packed loads with pop culture geekdom over the weekend of 31 August & 1 September 2013.

As evident over the entrance arch into STGCC, Marvel was on board this year in a big way thanks to its new partnership with Disney. Aside from generous loads of freebies every hour, Marvel also presented guests to share with fans their latest offerings in Comics, Animation and Games. Meet & greet sessions with Marvel artists like Joe Madureira (Uncanny X-Men, Battlechasers) and Adi Granov (Iron Man Extremis) also provided photo opportunities and autographs for fans to take home.

The Marvel Panels also provided interesting insight into their artists and production process. Audience members pitching good questions even scored freebies, like invites to a special Marvel Showcase event screening previews of upcoming shows like Agents of Shield. One particularly good question:
Fan: "Is Marvel considering a reboot like DC's 52?"
Marvel representative C.B. Cebulski: "No, because our universe isn't broken."

One particular Marvel character featuring more prominently than any other in STGCC was Iron Man as another variant of extremis has gripped numerous memorabilia companies to take up the licence and showcase their Stark products. With companies like Hot Toys & Play Imaginative showcasing legions of Iron Men, one could be mistaken for thinking they walked into Stark Expo! 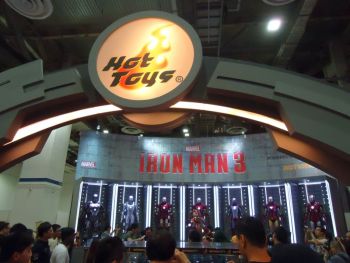 And it seems after 3 movies, Iron Man is still hot property with loads of collectors camping overnight to get hold of the Hot Toys Iron Man "Midas" limited edition 1:6 figure; we hear there was even a fight over these?! Alas, it's all high-end Iron Man collectibles with nothing of the Armored Avenger being sold for small change as even an Iron Man stamp collection came to SGD45.90! Perhaps Hasbro to be present next time to service the mass market toy fans and kids. Here's our photo snapshot of the Iron Men selection (if we took one of every Iron Man figure, there would be hundreds!):

Now onto recon of some non-Iron Men eye-candy:

For Star Wars fans, the massive Battle of Endor display by StarWars.SG would have provided some relieve from overdose of Iron Men. The 3.75in scale display primarily of Hasbro Star Wars toys also included some funny "easter eggs" to delight movie fans; see if you spot them below: 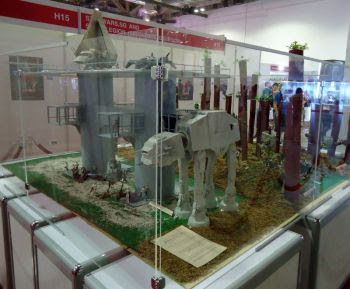 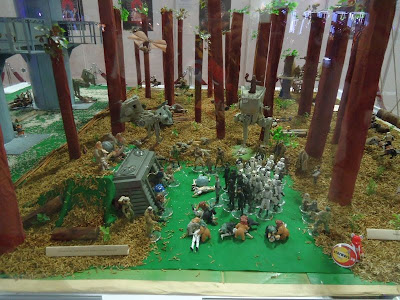 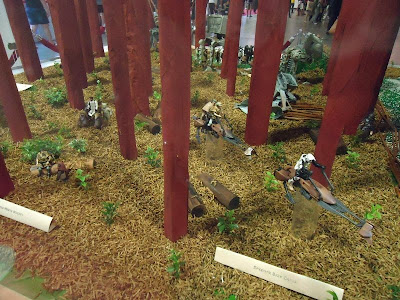 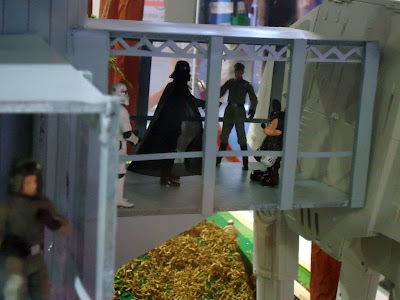 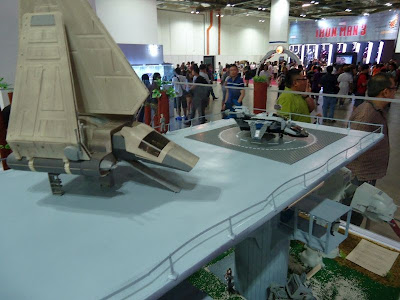 Cosplay was abundant at STGCC and well populated with Western pop culture cosplayers. Cosplay celebrities Vampy Bit Me from US and Aza from Korea were present for meet & greet with fans as well as share more about themselves during the Cosplay Panel. Here are only a selection of cosplay caught on camera by our MRT Away Team: 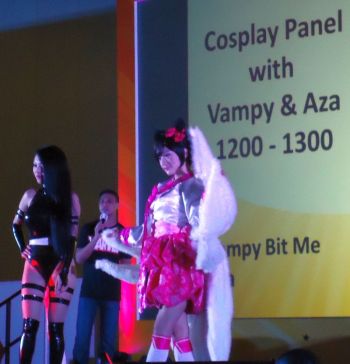 There's no shortage of stuff to buy from STGCC, only perhaps a shortage of limited edition products no thanks indeed to presence of scalpers aplenty! Other than the anchor exhibitors, toy retailers in the bazaar section provided a wider variety of new to vintage toy collectibles. Bargains were also found as much swag was spotted leaving the convention.

No doubt there was much more happening that our MRT team overlooked but there seemed to be no shortage of fandom over the 2 days at STGCC. To share some of the loot with our fans, Outpost latest giveaway from STGCC is a Thor Dark World Poster together with Marvel button badges and postcards. Just use PunchTab below by 16 September 2013 to stand a chance to win these giveaways.

Till 2014... Mighty Marvel!
(hope that gets DC to jump into the bandwagon next year)

2. Participation is open to all residents in Malaysia. Outpost Events personnel are not eligible to participate.

3. Winner will be randomly selected among qualified participants. Each entry method via Punchtab increases chances for selection.

Disclaimer: All trademarks are copyright to their respective owners, referenced here for fan service announcements without intent to infringe.