Dracula and his gang of eccentric monster friends return in this follow up movie to the first Hotel Transylvania. For those who have never watched the first movie, it centres on Dracula, a vampire who has built a hotel where scary monsters can come and have a relaxing vacation. Dracula is also struggling to raise his daughter, Mavis, with the help of his friends and the hotel staff after his wife is killed by an angry mob.

In this instalment, Dracula’s hotel has been opened to human visitors and things are going swell. His daughter Mavis, who fell in love with a human named Johnny in the last movie, has now married him and they have a little orange-haired son called Dennis.

Things get complicated when Dracula begins to worry whether Dennis is a vampire after he fails to sprout vampire teeth despite being a few years old. This leads him and his merry group of friends to put Dennis through ‘Monster training school’ in hopes that he will sprout little pointies. Dracula even ropes in his elderly father, Vlad to help in the transformation program. Vlad himself is pretty grumpy about the fact that Dracula allowed Mavis to marry a human. Check out the trailer and you’ll get the idea:


Adam Sandler returns as the voice of Dracula (whose favourite line is “I do not say blah, blah, blah”) and Selena Gomez also returns as Mavis. Andy Samberg reprises his role as the hapless Johnny while most of the other vocal casts remains the same, including Kevin James, Steve Buscemi, David Spade, Molly Shannon and Fran Drescher (of ‘The Nanny fame’). They play friends of Dracula, which include Frankenstein and his wife Eunice, Wayne the Werewolf and his wife Wanda as well as Griffin the invisible man.

Some of the new casts include Asher Blinkoff as young Dennis and Keegan-Michael Key who replaces CeeLo Green as Murray. Fans of the web show College Humour might recognize Key, who is a regular in its sketches. Veteran comedian Mel Brooks makes an appearance too, as Vlad, the not-so-happy family patriarch.

The film is produced by the little know studio Sony Pictures Animation who previously produced ‘Cloudy with a Chance of Meatballs’. Hotel Transylvania however, is meant to be a warm and fuzzy family friendly production with rather cute but disturbing scenes, like this little lullaby that Dracula sings for his grandson:

Check out this video with behind the scenes footage of the voice actors in action, as well as some of the animation processes. The words that come to mind are ‘painstaking’ and ‘determination’. Also Asher Blinkoff who plays Dennis is just too adorably cute. Did we mention he was cute?

Also, do visit the official site for a tonne of fun games, which are especially great for kids and adults alike, including a chance to create your own monster photobomb.

Here on the home front, the Outpost Movie Recon Team has scouted out several promos and contests related to the film:
Entertainement blog Klips.my is giving out free movie merchandise like T-shirts, drawstring bags and a projector watch, amongst others for contestants who answer a few simple questions here (http://blog.klips.my/post/127148206262/hotel-transylvania-2-movie-merchandise-contest). Check out the really cute drawstring bag in the shape of a bat : 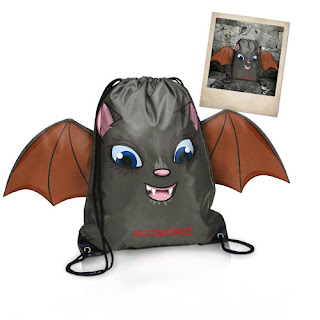 Budiey Malaysia is giving away passes to the premiere of the movie on 23rd September and you can easily get free tickets by answering some simple questions.
For those looking to buy movie related merchandise, here are some interesting finds:
Online shopping website 11 Street is offering the original movie poster for a mere RM90.00 here
Hotel Transylvania 2 collectible figurines are given out at McDonalds with any happy meal  from September 17th to October 14th 2015

TGV cinemas are giving away free passes to the movie for family friendly sessions, which cater to parents with young children and allows them to watch the movie in peace without having to worry about bothering others. These free passes will be given out at the Hotel Transylvania Carnival  organized by Sony Pictures Animation going on from September 19th to 27th at Sunway Pyramid. Activities include arts and craft, colouring contest, costume competition and quizzes.
For more info on family friendly screenings of Hotel Transylvania 2 at TGV cinemas, click here

Also don't forget to catch these friendly ghouls at the Hotel Transylvania Carnival.