Chronicling The Hobbit at The Battle of Five Armies #OneLastTime 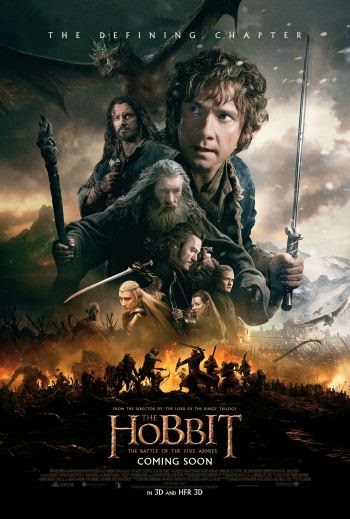 Unless you've been stuck in a hobbit hole lately, most movie fans by now should have been hit by the mega-marketing campaign for “The Hobbit: The Battle of Five Armies”. This 2 hour 25 minute fantasy movie concludes the cinematic trilogy by Sir Peter Jackson of J.R.R. Tolkien's “The Hobbit” fantasy novel for children originally published in 1937.

From Academy Award-winning filmmaker Peter Jackson comes "The Hobbit: The Battle of the Five Armies," the third in a trilogy of films adapting the enduringly popular masterpiece The Hobbit, by J.R.R. Tolkien. "The Hobbit: The Battle of the Five Armies" brings to an epic conclusion the adventures of Bilbo Baggins, Thorin Oakenshield and the Company of Dwarves. Having reclaimed their homeland from the Dragon Smaug, the Company has unwittingly unleashed a deadly force into the world. Enraged, Smaug rains his fiery wrath down upon the defenseless men, women and children of Lake-town. Obsessed above all else with his reclaimed treasure, Thorin sacrifices friendship and honor to hoard it as Bilbo's frantic attempts to make him see reason drive the Hobbit towards a desperate and dangerous choice. But there are even greater dangers ahead. Unseen by any but the Wizard Gandalf, the great enemy Sauron has sent forth legions of Orcs in a stealth attack upon the Lonely Mountain. As darkness converges on their escalating conflict, the races of Dwarves, Elves and Men must decide – unite or be destroyed. Bilbo finds himself fighting for his life and the lives of his friends in the epic Battle of the Five Armies, as the future of Middle-earth hangs in the balance. 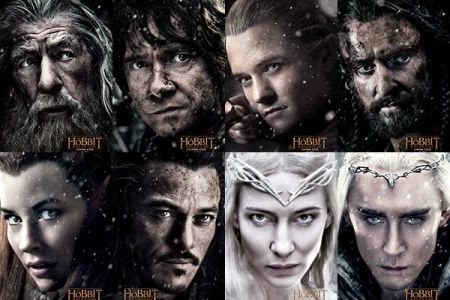 Preceded by “The Unexpected Journey” in 2012 and then “The Desolation of Smaug” in 2013, “The Battle of Five Armies” jumps right off from the preceding movie's cliffhanger. The main cast returns #OneLastTime with Martin Freeman as Bilbo Baggins (plus Sir Ian Holms as elder Bilbo), Sir Ian McKellan as Gandalf, Richard Armitage as Thorin Oakenshield, Luke Evans as Bard and special guest stars Orlando Bloom as Legolas, Cate Blanchett as Galadriel, Hugo Weaving as Elrond, and the venerable 92-year old Sir Christopher Lee as Saruman the White. Check out the full cast from the official website for The Hobbit.

If memory of the preceding 2 movies is somewhat challenged, here are poke-fun Honest Trailer recaps of “TheUnexpected Journey” and “The Desolation of Smaug”:

Now with the release of “The Battle of Five Armies”, movie fans can relive the adventure as a 6-part saga much like Star Wars Episodes I to VI. Note that the Hobbit prequel trilogy takes place around 77 years prior to primary events in the Lord of the Rings Trilogy; check out timeline of the history of Middle Earth at lotrproject.com.


Find out more at the official website which includes a nifty interactive map of Middle Earth covering the adventures of all 6 movies plus a simple Orc Attack game allowing fans to take the roles of Legolas, Tauriel or Bard to shoot enemies. Plus follow the official Facebook Page and Blog for movie updates.

Read-up this brief review by CinemaOnline or an extended edition by ColourlessOpinions.com. Or check some international opinions by Empire magazine online or video review by Jeremy Jahns.

Those who want to compare differences between the movie and the original book, read this article by Smithsonianmag.com.

The Hobbit: The Battle of Five Armies kicked off in Malaysia with the movie Premiere at TGV 1 Utama cineplex on 16 December 2014. Invited guests included local celebrities, movie fans, contest winners and costumers representing characters from The Hobbit and Lord of the Rings; photos below credit Potter SamLeong:

Find more photos here from the special event at Premium-X Cinemas. Also check out photos of other costuming fans from around the world. 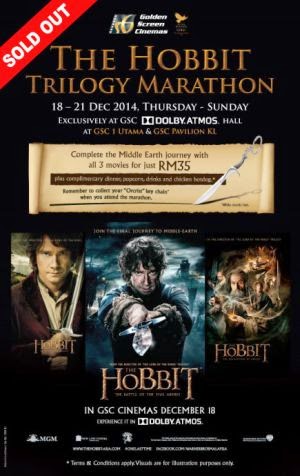 In addition to these special screenings, Malaysian fans had the opportunity to experience The Hobbit movie trilogy marathons by GSC and TGV Cinemas. The cumulative 8-hour screening time was no deterrent for movie goers with brisk ticket sales selling-out cinema halls faster than Radaghast's Rosgobel Rabbit sleigh. 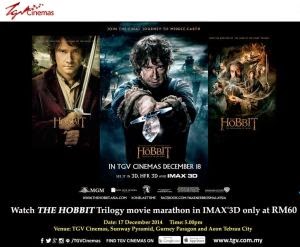 Despite the blockbuster appeal for this final chapter of The Hobbit Trilogy, finding official merchandise is fairly scarce. Nevertheless, the Outpost Movie Recon Team (M.R.T.) has uncovered the following “precious” artifacts for fan service: 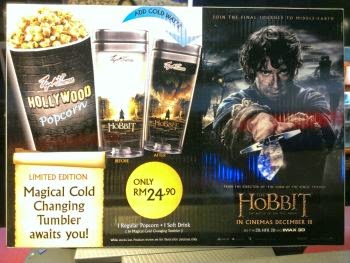 Firstly amongst the movie channels, TGV Cinemas is retailing their “Magic Cold Changing Tumbler” for RM24.90. Watch this video to see the "magic":

Furthermore, TGV is offering movie goers the chance to visit Middle Earth, New Zealand via their Watch & Win campaign. Customers purchasing tickets for The Hobbit: The Battle of Five Armies via online or mobile app until 31 December may participate to snag this vacation package for 2 worth RM20,000, or hampers of movie premiums. 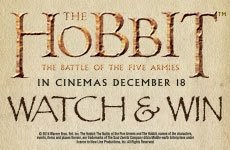 Find out more details and register at the TGV Cinemas website.

Meanwhile GSC Cinemas is offering similar assortment of movie premiums via their online contest for website customers until 7 January 2015. Polish your slogans for better chances to win the tie-breakers. 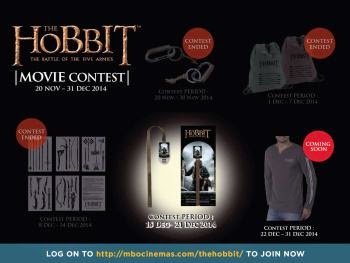 MBO Cinemas is has also been making available these premiums to their ALLSTAR card members, offering the chance to win different merchandise each week until year end. Join the last round kicking off today with a long-sleeve V-cut jersey up for grabs. 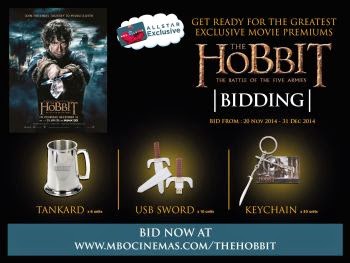 In addition, MBO has more exclusive premiums up for bidding using ALLSTAR points. Find out how to earn bid points and the bidding process at the MBO website store. 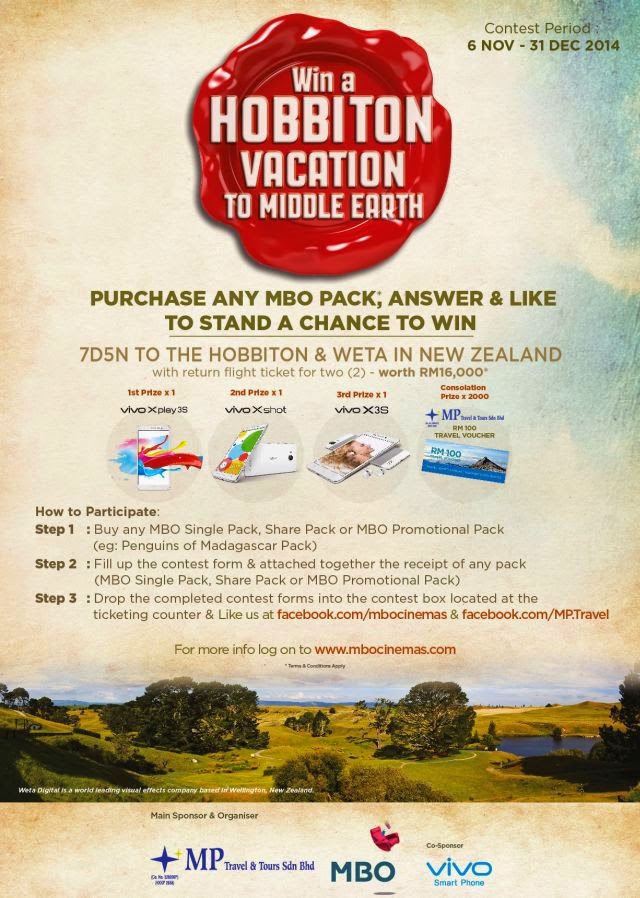 Finally, MBO Cinemas & MP Travel & Tours are offering the chance to visit Middle Earth as well for customers purchasing any Share Packs (movie + popcorn + drink combos) by 31 December 2014. The 7 day / 5 night package to New Zealand includes visits to Hobbiton and Weta for 2 pax worth RM16,000. Find out more at the MBO website promotions.

So for those lucky winners-to-be off on their adventure to New Zealand, hope they will be flying Air New Zealand for additional Middle Earth fan engagement:

This guide may also be of value for all travelers to Middle Earth (sighted at Borders bookstores for RM89.90): 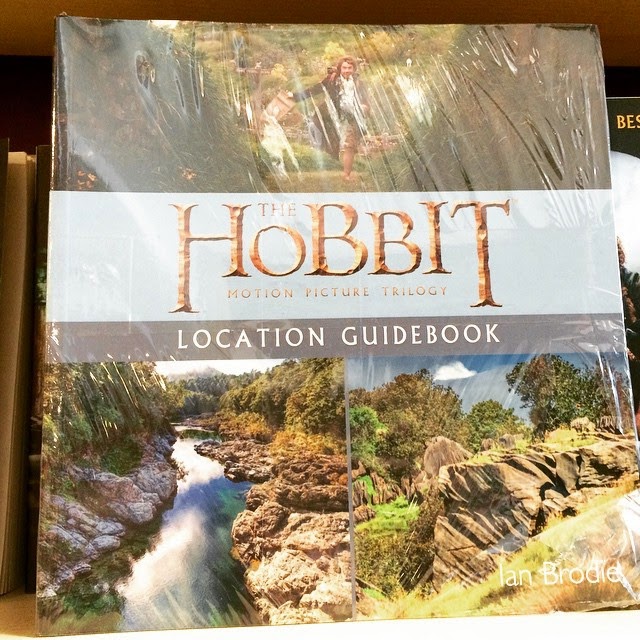 Apart from the cinemas, GenYes.MY has online contest with movie passes and premiums up for grabs. Join quickly as the contest closes 24 December 2014.

Official movie books for The Hobbit: The Battle of Five Armies comprise the Visual Companion, Movie Guide and Chronicles: Art & Design. Fans of “behind-the-scenes” will find more value with the latter 2 books offering peaks into the production of the movie. 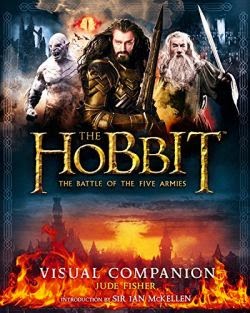 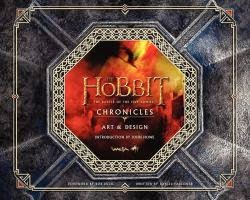 These books should be available at major local bookstores plus some available via MPH online.

Although the mass market action figure license for The Hobbit seems to have lapsed after the first two movies, buidling toys are still running strong with LEGO releasing sets from The Battle of Five Armies. Some of these were in face somewhat spoilery for the movie being released to mass market some time in advance of the movie release.


Check-out the various sets available at the official LEGO website to recreate the epic battles, or alternate takes like "The Aggravation of Smaug". Even non-LEGO collectors could be entertained by these cute mini-fig videos.

Collectors of novelty items may be enticed by these equally cutesy vinyl figures from Funko POP! So far Bilbo (invisible), Gandalf, Legolas, Azog and Thorin has been released under the preceding movie, The Desolation of Smaug, with an oversized Smaug being released for this final chapter.

Head over to the official Funko website to check out the rest of these figures and look out for them at specialty retailers in Malaysia stocking POP! Vinyl figures such as Borders bookstores.

For our valued readers and Outpost fans, the last #OutpostGiveaway for 2014 will be an LEGO minifig of Gandalf the Grey from The Hobbit.


Just follow the instructions in the form below and submit for chance to win!


We trust this M.R.T. report has been of help to Hobbit fans near and far. Let's end with a fitting tune from the official movie music video "The Last Goodbye" by Billy Boyd (actor for Pippin in the Lord of the Rings trilogy). 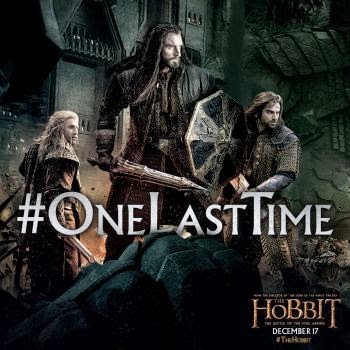 And to our fans, followers and clients,
Best Wishes for a Merry Christmas & Happy New Year! 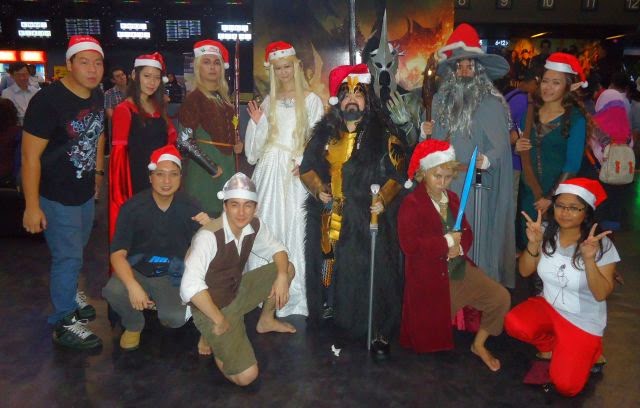 Disclaimer: The Hobbit, Lord of the Rings and other trademarks are copyright to JRR Tolkien, Warner Bros. Pictures, and their respective owners, referenced here for fan service announcements without intent to infringe.