Outpost Expeditions offers movie fans, comic geeks, cosplayers & costumers, gamers, & other like-minded enthusiasts the opportunity to experience western pop culture conventions around the world. From Singapore Toy Game & Comic Convention (STGCC) to Dragon Con Atlanta USA our expedition packages prepares you for an engaging pop culture con experience to be remembered! Plus visit world-famous attractions in the host city whilst you're there.

Check out this list of 17 Geek Conventions You Must Attend Before You Die! 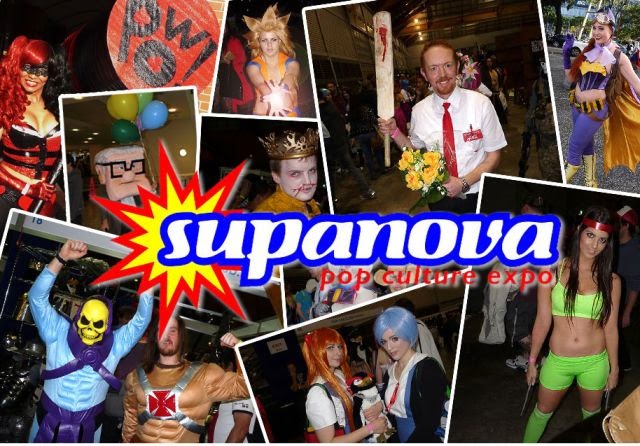 Since 2000, Supanova Pop Culture Expo is where the adoring public comes face to face with Supa-Star celebrities and the creative talent that inspire their imaginary worlds under one big roof. Gathered from and surrounded by the wonderful worlds of comic books, animation/cartoons, science-fiction, pulp TV/movies, toys, console gaming, trading cards, fantasy, entertainment technology, books, internet sites and fan-clubs, the result is an amazing atmosphere tailor made for expressing your inner geek and where getting into cosplay (cos-tume role-play) is the obvious thing to do!

This year's special guests of retro heroes from the past include action star, Dolph Lundgren, plus hot current stars such as Georgina Haig ('Elsa' from Once Upon a Time) and Robin Lord Taylor (Gotham's 'Penguin) in addition to celebrating Back to the Future's 30th Anniversary with Christopher 'Doc' Lloyd. Other guests include: 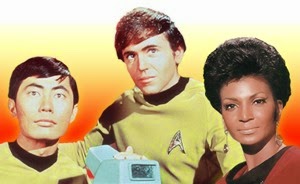 b) Melbourne Sea Life Aquarium
Home to over 10,000 animals, including one of the world’s largest Saltwater Crocodiles in the state-of-the-art Croc Lair exhibit, SEA LIFE Melbourne Aquarium takes you on an interactive adventure from the depths of the ocean to the icy waters of Antarctica. With interactive animal encounters, iconic state-of-the-art displays and animal feeds SEA LIFE Melbourne Aquarium is an excellent, educational and completely engaging experience. 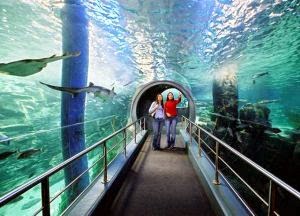 c) Australian Centre of the MovingImage (ACMI)
A unique institution at the heart of Melbourne's iconic meeting place, Federation Square, the Australian Centre for the Moving Image (ACMI) celebrates, explores and promotes the moving image in all its forms - film, television and digital culture. Through award-winning Australian and international exhibitions, films, festivals, live events, creative workshops, education programs and resources, ACMI provides unsurpassed ways to engage with the moving image. Screen Worlds: The Story of Film, Television and Digital Culture, is a permanent exhibition charting the journey of the moving image and, in particular, Australia's engagement with screen culture as consumers and creators.

d) Eureka Tower
Eureka Tower is a 297.3-metre (975 ft) skyscraper located in the Southbank precinct of Melbourne. It is one of only 17 buildings in the world with 90 or more storeys and is the 100th tallest building in the world. It is also the second-tallest building in Australia and the tallest building in Melbourne. The observation deck (Eureka Skydeck 88) occupies the entire 88th floor of the Eureka Tower and is the highest public vantage point in a building in the Southern Hemisphere at 285 m (935 ft). Skydeck 88 features 'The Edge' – a glass cube which projects 3 m (10 ft) out from the building with visitors inside, suspended almost 300 m (984 ft) above the ground. When one enters, the glass is opaque as the cube moves out over the edge of the building. Once fully extended over the edge, the glass becomes clear. Check out this video. 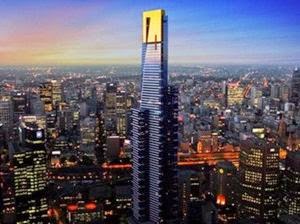 Check out this video of Supanova Melbourne 2014


It’s a full-on double rainbow for fans of science fiction, with the news that actor Nathan Fillion, and authors Kevin J. Anderson and Rebecca Moesta will be guests at Supanova in Sydney. 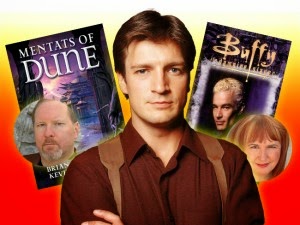 So, Browncoats, dust off your uniforms! It’s going to be a ‘FODRATWATS’ for pop culture enthusiasts! 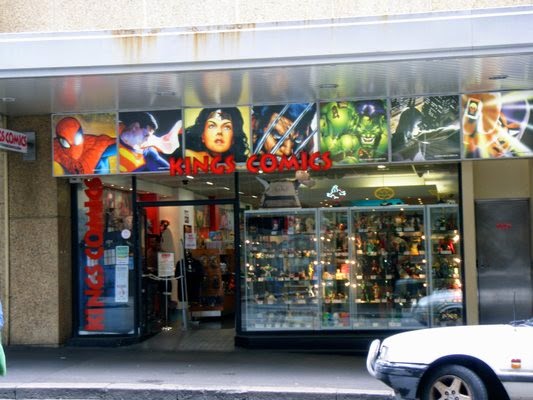 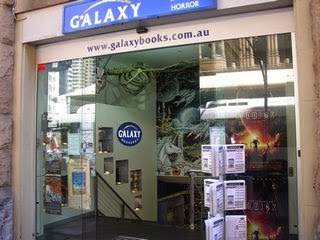 B) Sydney Opera House
One of the 20th century's most distinctive buildings and one of the most famous performing arts centres in the world, The Sydney Opera House became a UNESCO World Heritage Site since 2007. More than 7 million people visit the site each year, with 300,000 people participating annually in a guided tour of the facility 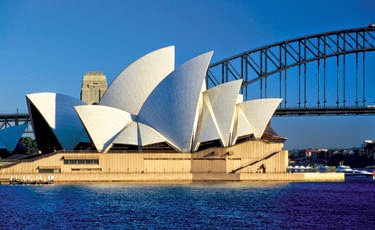 C) Madame Tussauds Museum
Millions of people have flocked through the doors of Madame Tussauds since they first opened over 250 years ago and it remains just as popular as it ever was. Today’s visitors are sent on a unique, emotionally-charged journey through the realms of the powerful and famous. Guests can truly get up, close and personal with A-list celebrities, sporting legends, political heavyweights and historical icons, reliving the times, events and moments. 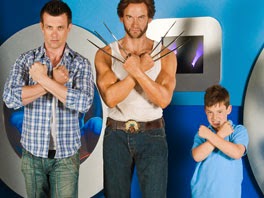 For further information and bookings, contact Shawn +6012-6109332 or shawnkhik@yahoo.com.

Revisiting Your Childhood Dreams with Cinderella

I remember as a child having a VHS videotape of Disney’s classic Cinderella animation from 1950 and watching it over and over again through the years. I can still remember until today how to sing ‘Bibbidi Bobbidi Boo’ as well as remember the names of Cinderella’s mousey friends ( Jaq and Gus). I still remember as a child trying to recreate certain scenes from the movie including Cinderella’s attempt to balance trays on her head and walk up and down the stairs. Of course the Mumsies was not too happy with all these childish shenanigans and quickly put a stop to it.

This year, whoever grew up with the famous classical Disney version of Cinderella will have a chance to relive their childhood fantasies by watching the live action movie starring Lily James and Richard Madden. Being a fan of the two renowned series which they represent (Lily James from Downton Abbey, Madden from Game of Thrones), I’m looking forward to seeing their on screen chemistry. Will it sizzle? Or will it fizzle?

Anyhow, the trailers look promising enough. Even though it is based on the original 1950 story, viewers and fans should keep in mind that it is a reworking and therefore the resemblance would be rather loose and not strictly similar. I personally think the trailer carries a hint of something darker and more realistic compared to the original cartoon. Also, very few appearances by cutesy little creature companions this time:

The ladies of course would be going gaga over Richard Madden in one of his first golden screen appearances after his critically successful work on Game of Thrones. Here you get to see him as the archetypical prince charming who does a host of macho activities like horse riding, sword fighting and waltzing. Let’s not forget that clean shaven Richard Madden has the bluest eyes ever and the shiniest smile you can get lost in.


Apart from our two visually appealing leads, the movie also stars Oscar award winner Cate Blanchett as the wicked stepmother and Lily James’ co-star on Downton Abbey, Sophie Mcshera as Drizella, one of the stepsisters. Holliday Grainger from the critically acclaimed series ‘The Borgias’ plays the other stepsister Anastacia and most exciting of all is a cameo from Helena Bonham Carter who plays the fairy Godmother. It seems the fairy godmother appears younger in the live movie version and doesn’t appear to sing any silly rhyming tunes. Here you can watch a tiny featurette that includes Helena Bonham Carter as the lively Fairy Godmother, who in this version seems to be a fan of heavy makeup:

On the homefront in Malaysia, the Outpost Movie Recon Team (M.R.T.) has sourced various brands are offering generous giveaways in conjunction with the movie’s release on March 12th 2015. We begin with the local cinemas chains whereby TGV Cinemas is offering the trip of a lifetime to meet Cinderella in person at Hong Kong Disneyland from their Watch & Win contest. Just watch Cinderella at TGV until March 26th 2015 and submit your entry online for chance to live this fairy tale: 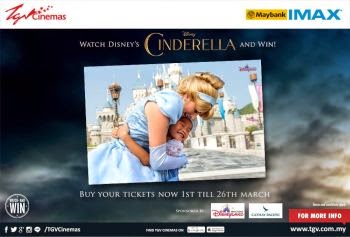 Meanwhile MBO Cinemas and Cathay Cineplexes are offering F&B concession promos. With their Cinderella Combo priced at RM17 for large popcorn and drink, MBO is throwing in a complimentary crystal dome double-walled cup. And strange “fairy tales do come true” with minty blue gourmet popcorn flushed down by Revive from Cathay Cineplexes. 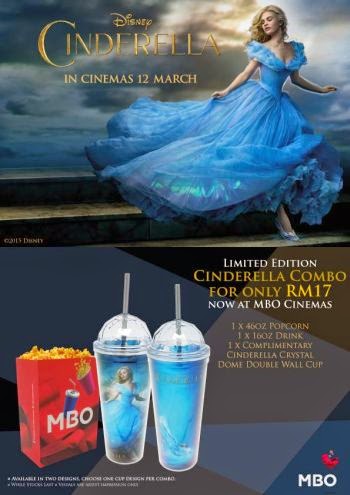 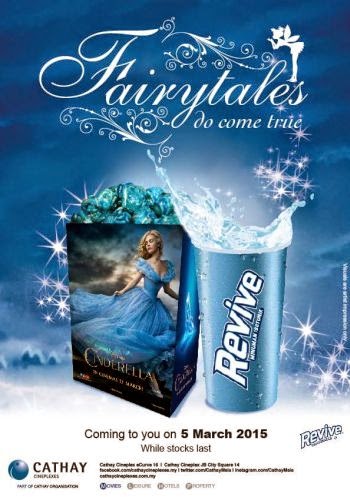 Astro customers with the Kidspack Subscription stand to win limited edition merchandise from AstroCircle. All you have to do is fill in your details and answer a simple question. If you are lucky entrant of the sequence number listed on their website, the prizes are yours. Contest runs until March 22nd.

Local beauty website lipstiq.com is also having a Cinderella merchandise giveaway and contestants stand a chance to in T-shirts, caps, Bracelet watches, and pocket mirrors. Just follow the instructions on their website and walk away with prizes. Double your chances of scoring these movie merchandise from local blog KLIPS+ is giving away similar goodies.

Kose Malaysia is promoting its Sekkisei line of products by giving away limited edition Cinderella phone plugs with every purchase of Sekkisei lotion, so you can visit their website to find out which retail outlets you can visit to get them.

So far, no local stores seem to be selling Cinderella live action movie merchandise, but you can ship products in from The Disney official website. There are dolls and figurines of Cinderella, the Evil Stepmother and Fairy Godmother, as well as costumes for kids and babies.

Lastly, of course, before we forget, the exclusive animated short ‘ Frozen Fever’ will only be shown with the feature length Cinderella movie in cinemas so fans are in for a double treat. The animated short tells the story of Anna’s plans to throw Elsa a birthday party and the chaos (plus fun) that ensues. Catch the trailer here:


Disclaimer: Cinderella and other trademarks are copyright to Walt Disney Pictures, and their respective owners, referenced here for fan service announcements without intent to infringe.