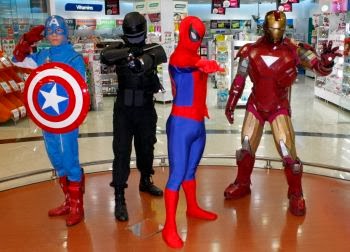 Our favourite Heroes will FIGHT infamous Villains to save the Galactic Princess...

Our 2nd matchup sizes up Gandalf the Grey Wizard against Glinda The Good Witch. Perhaps good Gandalf from Middle Earth as been similarly tricked by the Wicked Witch of the East to challenge Glinda of Oz.

Time to cast your votes again by:
a. For YouTube video, post under Comments your chosen victor.

Our next fight matchup is between the anti-villain Catwoman and everyone's friendly neighbourhood Spider-man. Will feline grace & feminine pheromones overcome arachnid senses & agility?

Up next drawing blood is Freddy Krueger vs. Klingon Warrior N'gel! How will Elm Street's nightmare battle against a Klingon which is immune to fear?

Victor of the fights will be revealed with an extended video showing result of the matchup at the Outpost Productions booth on Comic Fiesta, 21-22 December 2013; online versions will also be uploaded to YouTube and Facebook that weekend.

Ultimately, will our heroes prevail and save the Galactic Princess, or will the villains be victorious and imprison the princess forever! YOU DECIDE! Facebook share, reTweet, Google +1, etc. to get your friends to support your favourite hero/villain.

Subscribe to the Outpost YouTube Channel or Facebook Page for more upcoming Cosplay Fight Club! videos between your favourite characters which may never happen the movies. New videos will be released every week until Comic Fiesta 2013.

Video
Cosplayers
Music by Secession Studios, soundcloud.com/thesecession
Disclaimer: Trademark characters are copyright to their respective intellectual property owners, referenced here for fan entertainment only and not for profit.