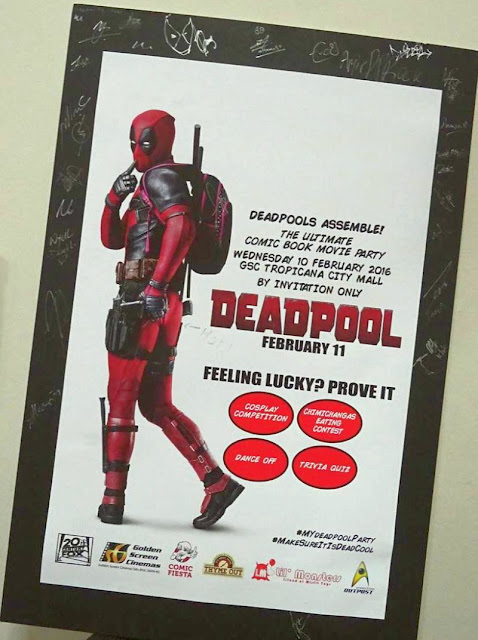 Shoppers at Tropicana City Mall might think they're going crazy after seeing multiple Deadpools recently when the Rule of 4th wall has been broken to over 44th wall at the Ultimate Comic Book Movie Party. Deadpool fans, comic book geeks, and movie lovers were invited for the craziest party and special movie screening organised by 20th Century Fox in partnership with Outpost Productions, Comic Fiesta, Lil' Monsters, Thyme Out and Golden Screen Cinemas.

After hundreds of camera flashes & many a Deadpool introducing themselves to each other, the party started with a food fight but not a typical food fight (although we wished we can do that!). The Chimichanga Eating Challenge pitted 5 brave souls to stuff their faces with Deadpool's favourite makan. Given upto 3 minutes, each challenger had to consume as many chimichangas as possible, supported by cheers from their fellow supporters. 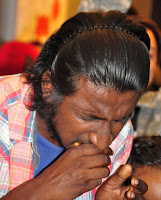 Next up, the Dance Off Contest where participants compete 1-on-1 showing their most impressive moves on the dance floor. But before that, the dance battles was disrupted by noisy crowd outside of the event hall!

And finally, the event that everyone was waiting for: the Cosplay "Mouth-Off Competition". Each Deadpool cosplayer not only had to show-off the best costume but also prove their worthiness to hold the title of the "Merc with a Mouth".

Check the live action from this video:


The Ultimate Comic Book Movie Party with Deadpool
The Ultimate Comic Book Movie Party for Deadpool rocked GSC Tropicana City Mall on Wednesday 10 February 2016. Over 140 Deadpool fans, comic book geeks, and movie lovers gathered to celebrate release of Deadpool in Malaysia with fun-filled activities plus chimichangas. Cosplayers showcased their best Deadpool personas in the Cosplay Competition whilst other guests flaunted dead cool moves in the Dance Off Contest. "Mercs with Mouths" also got to stuff their face in the Chimichanga Eating Challenge.Check out the action and what party guests had to say about the Deadpool Movie.#Deadpool #MYdeadpoolParty #ThisIsDeadCoolBased upon Marvel Comics’ most unconventional anti-hero, Deadpool tells the origin story of former Special Forces operative turned mercenary Wade Wilson, who after being subjected to a rogue experiment that leaves him with accelerated healing powers, adopts the alter ego Deadpool. Armed with his new abilities and a dark, twisted sense of humor, Deadpool hunts down the man who nearly destroyed his life.Deadpool now showing in cinemas nationwide.¯\_(ツ)_/¯ Music credit: "Funky Chunk" Kevin MacLeod (incompetech.com)Licensed under Creative Commons: By Attribution 3.0 License
Posted by 20th Century Fox on Thursday, 11 February 2016


Here's what guests had to say after the Deadpool movie special screening:

Also check out our Guide to Deadpool and Filem Review.

Deadpool has debuted to a global total of around US$260 million, with the international box office numbers now in at US$125 million and a US$135 million U.S. domestic bow.

That makes it one of the most successful openings for a comic book movie ever, and the second highest-grossing R-rated comic book movie of all time already, behind only 300 with its $210 million box office haul. Expect Deadpool to pass that by this time next week, unless it has a monumental drop in its second weekend.

Deadpool also has the benefit of being made relatively inexpensively. Batman V Superman is expected to take in about US$150 million domestically in its opening weekend (albeit by the same experts who projected US$75 for Deadpool, so take that for what it's worth), but that movie cost about four times what it took to make Deadpool. Ditto Avengers: Age of Ultron, which opened to a massive US$190 million but cost US$250 million to produce. Batman V Superman cost "just" US$200 million according to the numbers currently available -- but Deadpool managed this massive opening on a US$58 million budget and the seemingly boundless creativity of its marketing team.


Disclaimer: Deadpool and other trademarks are copyright to Marvel and/or 20th Century Fox, referenced here for fan service announcements without intent to infringe.
Posted by Outpost Productions 1 comment: