Written by The Vulcan. 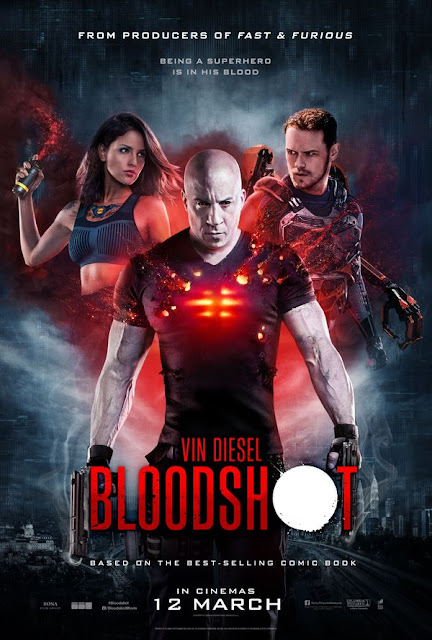 BLOODSHOT. "Who?" you may ask. What he ain't is another intergalactic rogue misfit adventurer the likes of Star-lord in the Marvel Cinematic Universe (MCU). However he is yet another character with comic book origins but not that from the pages of Marvel or DC. Instead Bloodshot first appeared in the pages of Valiant Comics in November 1992 as guest or cameo roles of Eternal Warrior and Rai. With a solid reception by readers, Bloodshot #1 was released in February the following year to quickly become one of Valiant Comics best-selling characters.


Created by Kevin VanHook, Don Perlin, and Bob Layton, the original Bloodshot was imagined as a tech-augmented soldier with super-human attributes and regenerative "healing factor" (like Marvel's Wolverine) made possible by nanites in his bloodstream. For the less sci-fi initiated, nanites are extremely small robots the size of nanometers (billionth of a meter); as comparison a human hair is 75,000 nanometers. In the comics, the nanotechnology was developed by Project Rising Spirits (PRS) over decades to create the ultimate soldier embodied as Bloodshot. However the process erases his memory and implants false ones as a means for control. Core to the story is Bloodshot's quest to recover his identity.


The first volume of Bloodshot comics ran for 51 issues until 1996. It was then rebooted the following year by Acclaim Comics with this second volume running 16 issues. After a long hiatus, Bloodshot returned in 2012 with a third volume now under Valiant Entertainment. This incarnation of Bloodshot finds his former identity as Ray Garrison and continues to adventure in several series until today in Volume 4. If you like to check out the comic books, follow this guide for the right reading order. The first issue is even available to read for free here.


The rights for a Valiant cinematic universe (VCU?) was acquired by Sony Pictures in 2015 for five movies starting with Bloodshot and then the Harbinger titles; Harbingers are psychics with superpowers with shared story arcs involving Bloodshot. Unfortunately for Valiant fans, rights of the Harbinger titles fell to Paramount Pictures last year and therefore prospects for such a new superhero universe were much diminished; read more about this here. Whilst there are no definitive movie release dates for Harbinger, Sony's Bloodshot blasts into cinema's worldwide this week.

Based on the bestselling comic book, Vin Diesel stars as Ray Garrison, a soldier recently killed in action and brought back to life as the superhero Bloodshot by the RST corporation.  With an army of nanotechnology in his veins, he’s an unstoppable force –stronger than ever and able to heal instantly.  But in controlling his body, the company has sway over his mind and memories, too.  Now, Ray doesn’t know what’s real and what’s not – but he’s on a mission to find out.

Star of the blockbuster Fast & Furious franchise Vin Diesel takes on the mantle of Bloodshot / Ray Garrison. Fans of the comics will point out immediately that he looks nothing like the titular character with grey ash skin, red eyes, chest circlet, and... hair! Indeed Vin Diesel retains his trademark "bad boy" look of his breakout roles as Dominic Toretto, Xander Cage and Riddick. So perhaps it's best to frame this movie adaptation as Vin Diesel's version of Bloodshot. 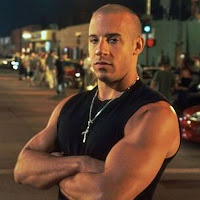 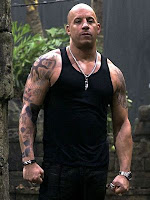 Whilst the exploits of Dom / Xander / Riddick often surpass human believability, his latest foray as Bloodshot brings him true superpowers able to smash concrete with his bare hands and heal lethal injuries faster than Marvel's most famous clawed mutant. Of course one can say Vin Diesel has also been superpowered before as the lovable Groot in the Guardians of the Galaxy, even cheating death like Ray Garrison. Let's just say Bloodshot is how we imagine Fast & Furious' Dom to be if granted superhuman powers!

In the movie PRS has been renamed Rising Spirit Technologies (RST) and based in Kuala Lumpur, Malaysia! Can't miss our Petronas Twin Towers in that trailer, then have fun trying to spot other familiar sights in the movie. But don't hold your breathe too long (unless you're KT; see below) as American producers just might not get the local nuances right... like what was suppose to have passed off as Sibu, Sarawak in 2018's Venom movie! 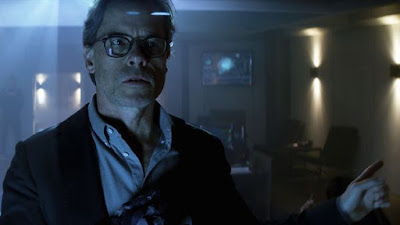 RST's reseach program is headed by Dr. Emil Harting (above) played by Guy Pearce (Iron Man 3, Prometheus). Using nanotechnology and cutting-edge prosthesis, he has created a team of augmented soldiers codenamed Chainsaw, with a brainwashed Ray Garrison as its most potent weapon sent on missions across the world. 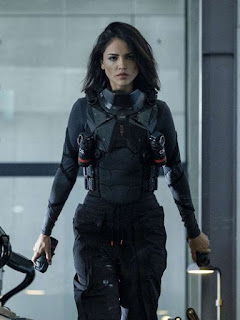 KT (Eiza Gonzalez, above) was injured in the line of duty and subsequently equipped with prosthetic lungs enabling augmented function underwater. 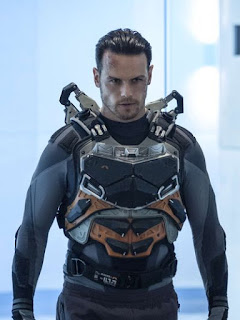 Ex-Navy SEAL Jimmy Dalton (Outlander's Sam Heughan, above) who lost his legs in an explosion now sports stronger and faster bionic legs from RST. As seen in the trailer he is also further augmented with an additional pair of mechanical arms which no doubt evens the odds when he is seen trading blows with Garrison.

See what the RST's team of augmented humans are capable of in this tech vignette:


Bloodshot is Director David S.F. Wilson's feature movie debut. Hailing from South Africa, he started his career visual effects with actor Sharlto Copley (District 9, The A-Team, Chappie). Creating a name for himself, he was recruited by Tim Miller (director of Deadpool) into Blur Studio in California. He has more recently directed the pilot episode of the Netflix series Love, Death + Robots. Wilson shared that it was Vin Diesel's 8-year old son Vincent that helped convince the action star to come on board for Bloodshot.

Check out what Wilson, Vin Diesel, Eiza Gonzalez and Bloodshot's co-creators Bob Layton and Kevin Vanhook have to say:


Hear more from Vin Diesel and the cast including Lamorne Morris as Wiggins in this extended interview by ComicBook.com:


It is worth noting that this movie is not actually Bloodshot's first live action appearance. Indeed just a couple of years ago in 2018 Bloodshot appeared in web TV series Ninjak vs the Valiant Universe by fan filmmaker Aaron Schoenke of Bat in the Sun, famous for its Super Power Beat Down videos. Actor Jason David Frank of Power Rangers fame was cast as Bloodshot looking close to the character's comic incarnation. Watch the action below:

Ninjak vs. Bloodshot... who will win?

2020's Bloodshot comes in different flavour from the comic book superhero movies from Marvel and DC being served in recent years such that we could step into the cinema with minimal context and limited expectations. Hence, Bloodshot delivered an entertaining ride without a dull moment.

However it's difficult to see Vin Diesel apart here from his trademarked roles (black singlet - check!), just elevated to insane superhuman levels. Maybe that's why he took the role since doing the same carnage to F&F's Dom can't be explained rationally away in that franchise. Perhaps he could have tried to look closer to the comic Bloodshot and be a bit less Vin Diesel. But then that would probably disappoint a few million of his fans that want a Vin Diesel movie. And Vin Diesel fans probably outnumber Bloodshot fans so we can understand Sony Picture's choice as less risky versus casting against a less well-known younger actor.

Whilst the plot is somewhat predictable thanks to the trailer having explained a bit too much, there are still some small surprises. One of which is Lamorne Morris' Wilfred Wiggins who contributes much of the movie's humour. And most of the other cast members have enough moments to be worth remembering their names.

As for Kuala Lumpur, our nation's capital could have been "served" better with some on-location shoots. But the actual location of RST was not really important to the overall narrative, as noted in an overseas reviewer that a different cut of the movie exists where the city was not named.

No doubt Bloodshot's box office performance will determine whether there will be sequels. But if the movie plays well then selling a sequel will certainly be easier and should be put into production sooner rather than later as middle-aged lead star Vin Diesel is not getting any younger, muscles aside. As for a Valiant Cinematic Universe, it's unlikely Harbinger Wars will happen but there are many other comic books Sony Pictures could look to adapt; just browse the Valiant's comic titles.

For other opinions, read this review by Variety or watch Comicbook.com's video:


Wanna win some Bloodshot movie premiums? Join this contest by KLIPS by 17 March. 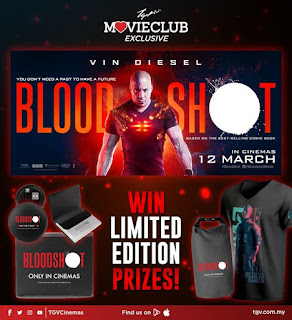 TGV Cinemas is offering their MovieClub members to the chance to win these movie premiums via their Facebook contest ending 19 March. Then watch their exclusive interview with Vin Diesel himself here. 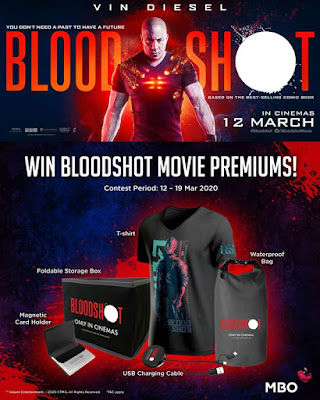 MBO Cinemas has similar movie goodies available via their Facebook contest until 19 March as well. 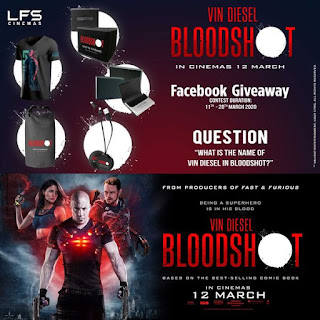 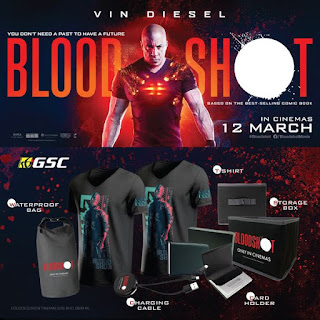 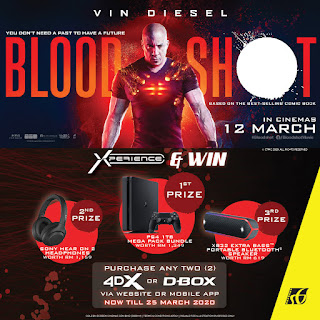 Plus choose to watch Bloodshot in GSC's 4DX or D-box by 25 March and stand a chance to win Sony appliances including a PS4. 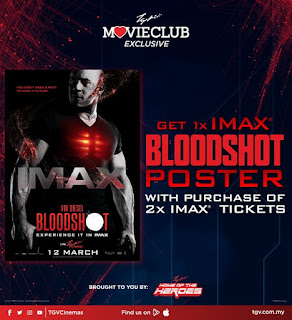 Fans of IMAX movies at TGV Cinemas will receive an exclusive poster with every purchase of 2 tickets.

Disclaimer: Bloodshot is a registered trademark of Valiant Entertainment LLC, referenced here for fan service engagements without intent to infringe.
Posted by Outpost Productions No comments: