Journeying to The Dark World this Oc-THOR-ber! 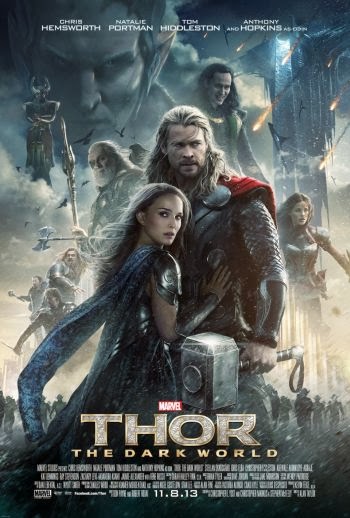 This month of Oc-THOR-ber, the mighty THOR returns to cinemas to battle ancient evil from The Dark World. In the aftermath of Marvel's "Thor" and "Marvel's The Avengers," Thor fights to restore order across the cosmos...but an ancient race led by the vengeful Malekith returns to plunge the universe back into darkness. Faced with an enemy that even Odin and Asgard cannot withstand, Thor must embark on his most perilous and personal journey yet, one that will reunite him with Jane Foster and force him to sacrifice everything to save us all.

Alan Taylor takes over the director's chair for Thor: The Dark World with most of the cast returning from the 2011 origin movie. 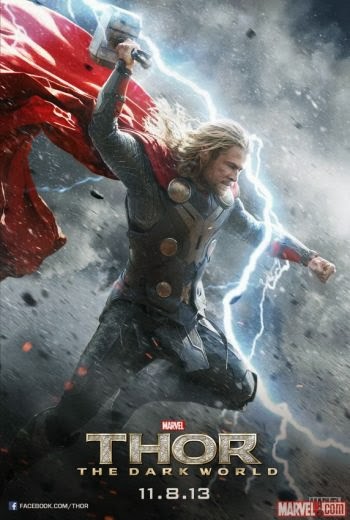 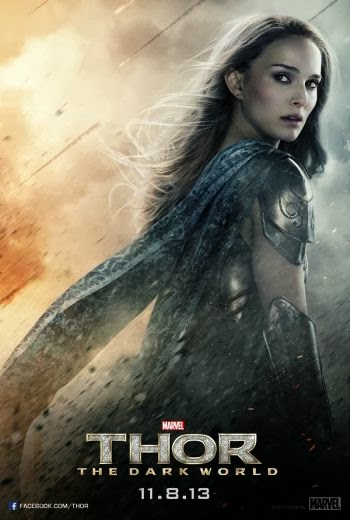 Chris Hemsworth stars in his third outing as Thor, reuniting with co-star Natalie Portman as Jane Foster, who is not happy that the God of Thunder did not drop in to see her during formation of the Avengers at the invasion of New York. 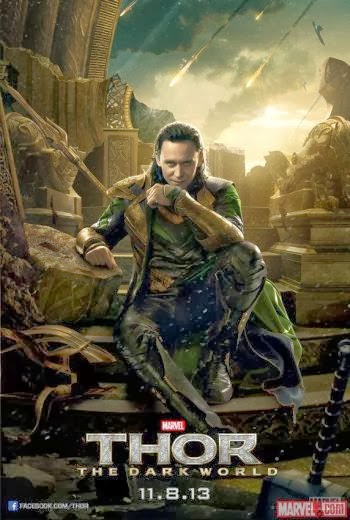 Also back on this third Marvel movie, Tom Hiddleston reprises his role as Loki, whose popularity seems to be out-doing Chris Hemsworth himself! Just check out photos from movie promo events on the official Thor Facebook Page.

Since his surprise appearance at Loki in SDCC 2013, Tom Hiddleston certainly seems to have generated his own league of worshippers, particularly amongst the fan-girls while normal women-folk may continue to swoon over Chris Hemsworth god-like physique. Well, fans of both Team Thor and Team Loki can gasp in delight together as the Asgardian brothers look to be sharing lots of screen time together on their forthcoming journey to the Dark World. 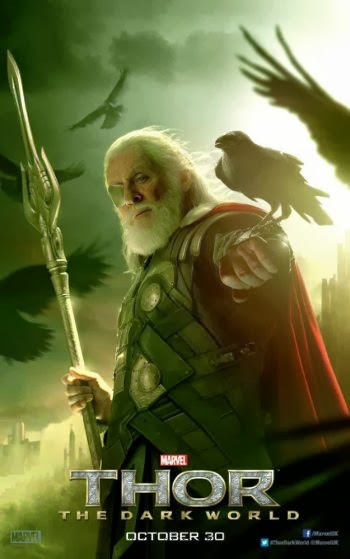 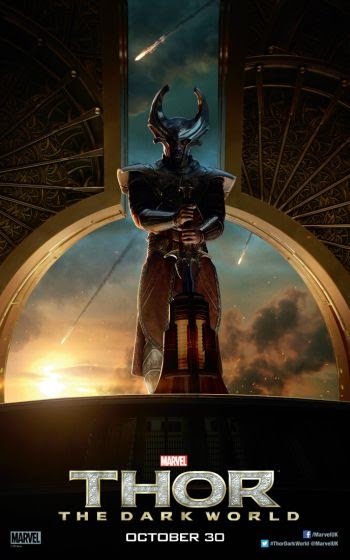 While S.H.I.E.L.D. watches and protects mankind on Earth, the Asgardians seems to be the equivalent counterpart on the galactic scale protecting many worlds across the nine realms.

Strangely Hogun doesn't get his own poster to complete the Warriors Three, or perhaps it will be a Japan exclusive.

Space elves get nasty in the form of Malekith, played by Chris Eccleston of Dr. Who fame. Now as Ruler of Dark Elves from the realm of Svartalfheim, Malekith plots to engulf the universe in darkness. 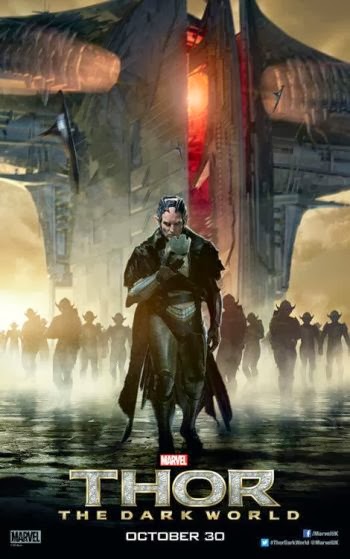 Thor: The Dark World will unleash at Malaysian cinemas on 31st Oc-Thor-ber, Halloween Day! Let's look forward to some Asgardian cosplay at the movie opening:

If you haven't yet gotten tickets for Thor The Dark World, MBO Cinemas will be giving out FREE tickets at 7pm on this THORs-day, 31 Oc-Thor-ber. 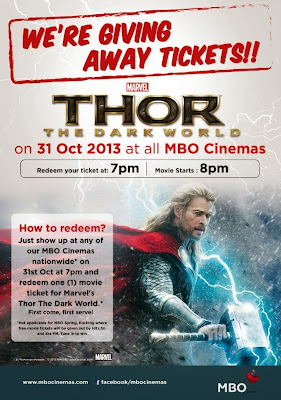 While at MBO Cinemas, the Outpost Movie Recon Team (M.R.T.) has also identified movie cup and postcards you can take home as souvenirs. Just purchase the following Mega-Cup and Postcard Combo for RM14.90 which comes together with soft drink plus popcorn to enjoy during the movie. 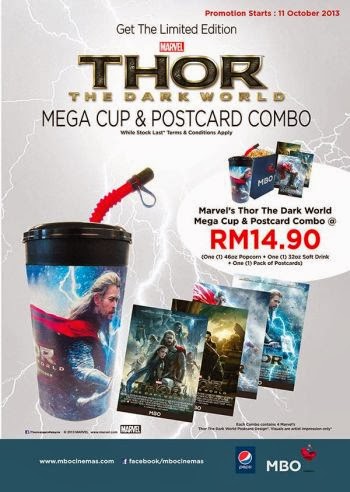 Meanwhile, GSC gives us mere mortals a chance to be worthy of Thor's mighty hammer Mjolnir. With purchase of GSC Combo 3 or Large Signature Combo 1, you can take home a mini Thor Hammer for only RM2. 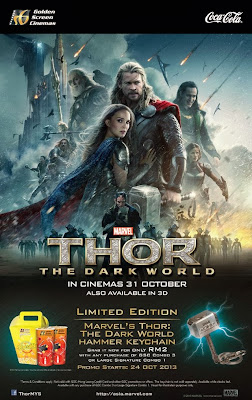 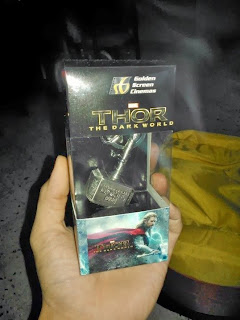 GSC also has an online contest via their website for a chance to win more Thor: The Dark World movie premiums. 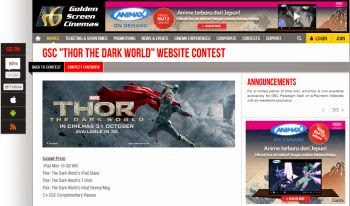 Movie goers to TGV Cinemas purchasing tickets online or via mobile App are entitled to win movie premiums as well. Make you purchase then enter your booking number and details through the TGV website contest form. 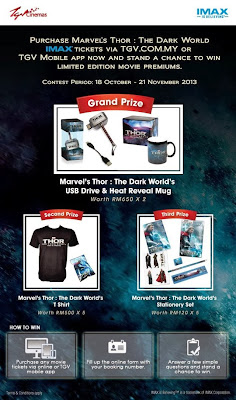 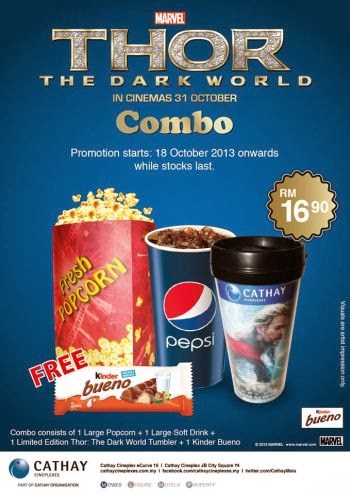 In you want to feast like an Asgardian god, try Burger King's Hammer burgers. For a RM13.95 meal, get an Angus Black Pepper Beef or Tendercrisp Chicken burger, fries and special Lemon Bolt soft drink. Plus add RM6.90 to take back a Thor or Loki steel water bottle to bring along on your adventures to the nine realms. 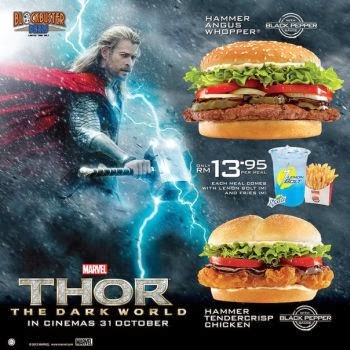 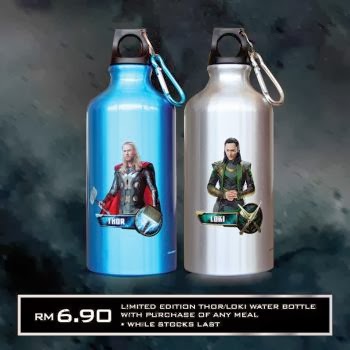 The Outpost M.R.T. has been hard pressed to find any Thor: The Dark World toys and collectible merchandise locally. Hasbro has once again a series of Marvel action figures for this movie, which should be stocking on shelves soon at Toys R Us or major retailers. There are 3.75in series figures, a 10in electronic effects Thor, and various role-play items like Mjolnir. So far we have only spotted the 3.75in figures at one collectible hobby shop. Goto MarvelToyNews.com for on-shelf product photos.

More appealing to adult collectors could be Thor and Jane Foster figures from Diamond Select Toys (DST). However as there is no offical distributor for DST in Malaysia, we can only hope specialty hobby shops will bring them in. Check out photos of these figures and cutesy Minimates series from MarvelToysNews.com. 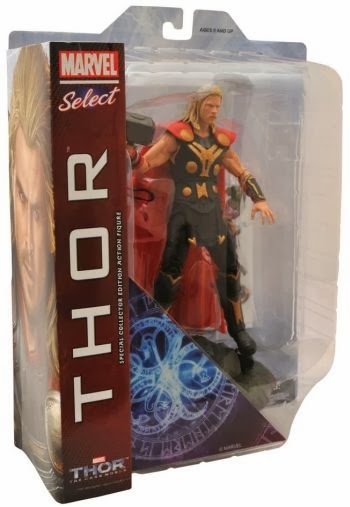 High end collectors and fan boys / girls will be happy to note Hot Toys is once again releasing a new version of the God of Thunder for Thor: The Dark World. In fact, there are 2 versions: Thor fully armoured (as he is during epic battles) and light armour (showing off his brawny arms), the latter looking to be an exclusive release through SideshowCollectibles.com. But it looks to be a long wait for these hot toys as release dates look to be almost 1 year away.

Sadly LEGO doesn't seem to have Thor: The Dark World building sets like for Avengers and Iron Man 3. So LEGO fans will just have to play out their journey to The Dark World with Thor & Loki from last year's the Avengers sets. LEGO did parody the movie poster by converting the lead characters to their LEGO minifigure equivalents: 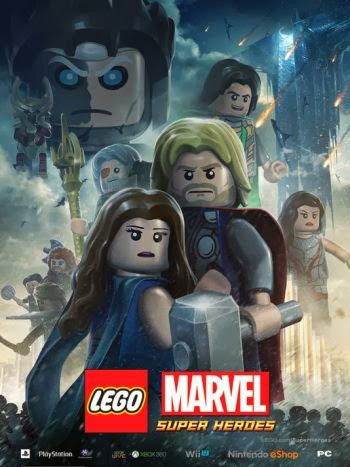 Now both Marvel and LEGO fans can play Thor and other superheroes to smash Loki and evil cohorts in the just released LEGO Marvel Superheroes video game:

Phew, that's wrapping it up for this M.R.T. report and hope it helps our loyal followers have a truly Thor-some experience.

Now we'll just sit back and throw some hammers while counting until Thors-day for release of Thor: The Dark World!

Disclaimer: Thor and its trademarks are copyright to Marvel Entertainment, referenced here for fan service announcements without intent to infringe. 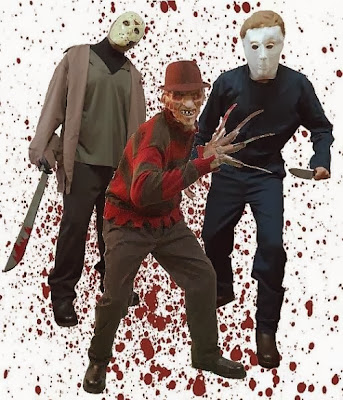 31st October, Halloween. The day of the year when all are invited to cosplay their best or worst. Here's an assortment of Halloween horror characters associated with  Outpost to share some scares: 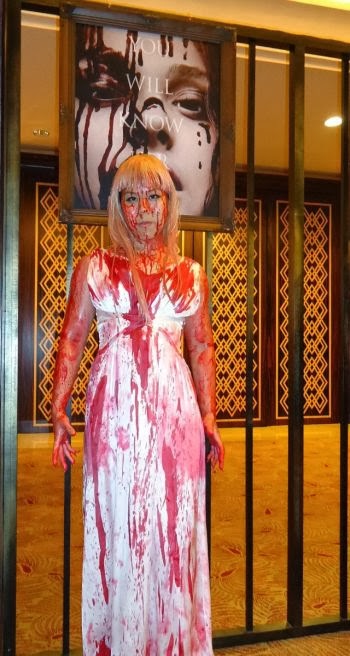 Stephen King's 1974 novel "Carrie" gets another movie adaptation this year; the first Carrie movie was released in 1976. This time Chloe Grace Moretz (Kick Ass 1 & 2) plays Carrie, a shy high-school girl who discovers latent telekinetic powers and uses them to deadly affect to exact revenge on fellow students for humiliating her at the prom.

Carrie will be bloodying local cinemas on 7 November. Meanwhile check out this cool viral movie marketing video of a "live" telekinetic outburst at a coffee joint:


If planning to cosplay blood-drenched Carrie without being drenched in blood, here's an online video for bloodied make-up without the mess:

Or if you just rather be a Vampire (of non-glittery species), follow this make-up guide:

31 October 2013 is also coincidentally the release date of Thor: The Dark World in Malaysia, a full week before the US release!

Let's look forward to Thor and Marvel fans parading this Halloween day in Asgardian costumes, such as rival brothers Thor and Loki: 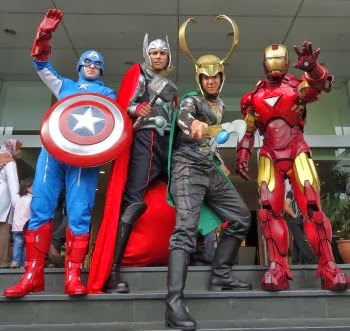 The Outpost Movie Recon Team (M.R.T.) will be out for some "Trick O' Treat" again this coming Halloween with shopping mall retailers offering a host of seasonal promos. The M.R.T. enjoyed tasty ribs and premium ice-cream at 30% off plus free smoothies last year about The Curve. 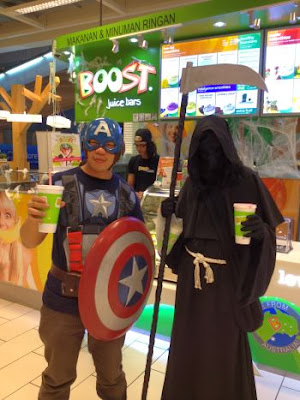 This year, the M.R.T. looks to "Trick O' Treat" at 1 Utama shopping centre to snag some goodies then journey to Asgard in IMAX 3D. TGI Fridays is already promoting their Halloween Costume Contest with RM150 of cash vouchers being offered as prizes. 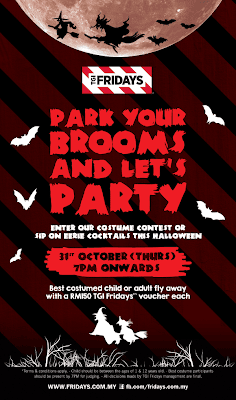 If interested to join, stay tuned to updates on the Outpost Facebook Page counting down towards Halloween.

You may also want to dress up pre-Halloween as Cathay Cineplexes is holding an online Instagram contest for the month of October with movie passes being given away: 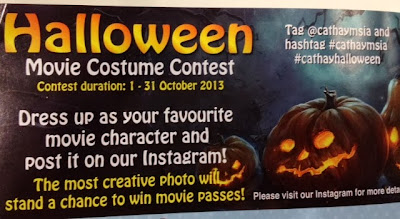 For some Halloween scares, Sunway Lagoon is holding Nights of Fright on 18, 19, 25, 26 and 31 October between 7.30pm to 10.30pm. Not an event for costumers though, as guests become the unwitting humans to be victimised by live horrors such as famous cult creatures and zombies from World War Z! Find out more at Sunway Lagoon website. 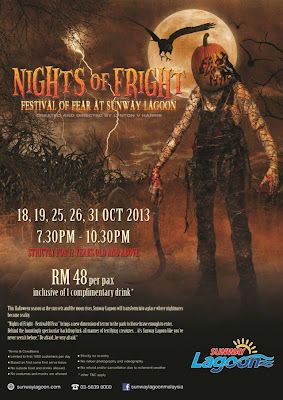 The Outpost MRT might just brave the ghouls for another recon mission. Standby for our report soon, or e-mail us if you like to volunteer to be part of our Away Team. 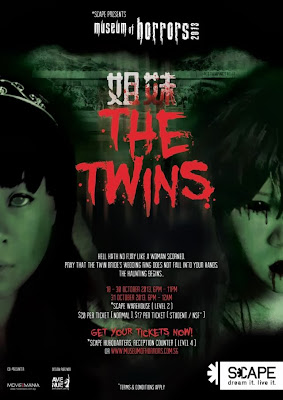 While in Singapore, Universal Studios Halloween Horror Nights also looks to be a fright filled outing. Find out more from their official website.


Outpost once again has Halloween goodies to giveaway! This time the MRT is seeking "mystical heroes" to award a "magical hammer" plus hamper of movie premiums. To participate, post your self-photo in mystical costume on the Outpost Facebook Page with #OutpostMysticalHero and character description by Sunday 27 October 2013. 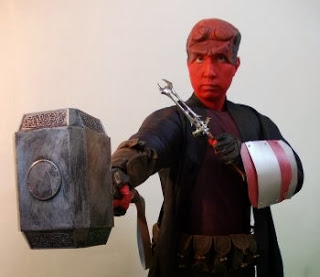 A mystical hero which is deemed worthy by the Outpost Command Crew shall be awarded their new weapon against evil plus other goodies.

4. Winner will be selected by Outpost Command Crew amongst qualified participants.

6. Outpost as the organiser reserves the rights to change these terms and conditions without prior notice.


Disclaimer: All trademarks are copyright to their respective owners, referenced here for fan service announcements without intent to infringe.

Posted by Richard Chua No comments: