A Clash of Super Soldiers: Captain America vs Winter Soldier 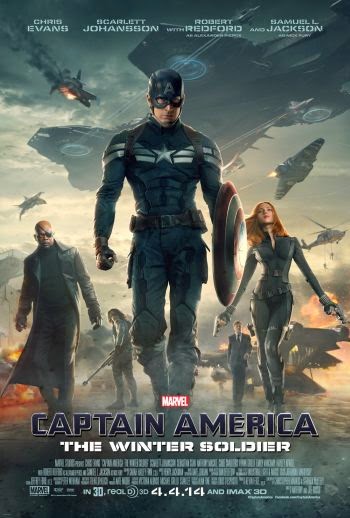 Two years after the events of The Avengers, Steve Rogers (Chris Evans) resides peacefully in Washington, D.C., struggling to adapt to contemporary society. However, after a S.H.I.E.L.D. compatriot is assailed, Steve becomes entangled in a mystery that may endanger the globe. Together with Natasha Romanoff aka. Black Widow (Scarlett Johansson), Captain America attempts to uncover the growing machination while fending off hired hit men. When the entire scheme is discovered, Captain America and the Black Widow must recruit the aid of the Falcon and soon encounter an unanticipated and powerful adversary; the Winter Soldier.

Captain America: The Winter Soldier is blazing away at the cinema box office this week in Malaysia, 1 week before release in US! Unfortunately that means Malaysians won't get extra geek service from the anticipate tie-in with Marvel's Agents of S.H.I.E.D. season finale leading up to the events in this new movie. Directors Anthony & Joe Russo now helm Captain America: The Winter Soldier, reuniting Steve Rogers with an ensemble of characters from the Marvel Universe, most notably Black Widow & Nick Fury (Samuel L. Jackson) as well as Maria Hill (Cobie Smulders) and Agent Sitwell, plus introducing Sam "The Falcon" Wilson (Anthony Mackie), Agent 13 Sharon Carter and one of the original WW2 Howling Commandos, "Bucky" Barnes (Sebastian Stan). 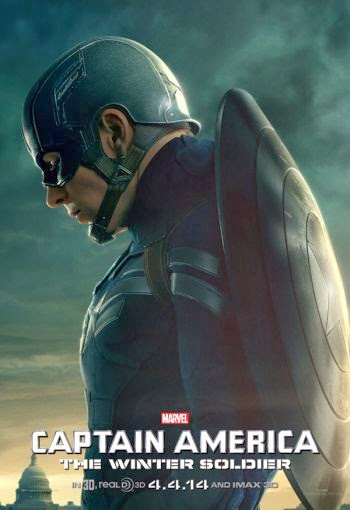 Here's the main cast of Captain America: The Winter Soldier featured on official movie posters together with online featurettes: 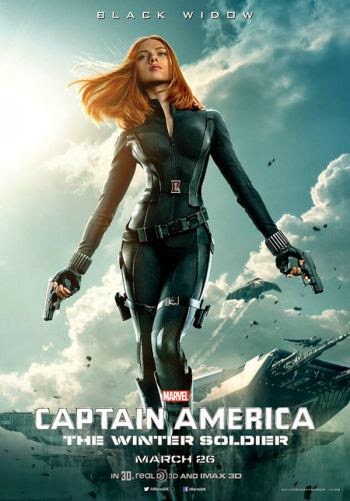 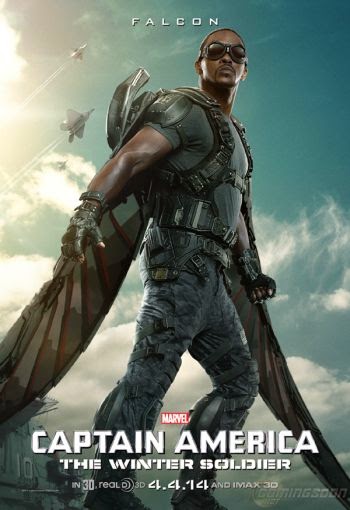 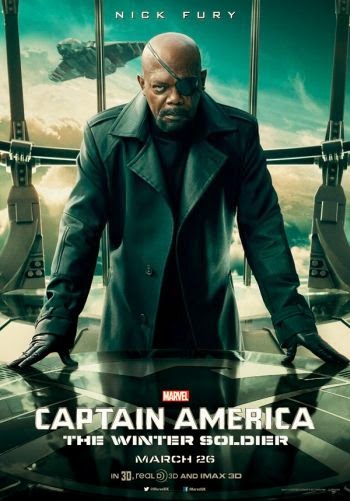 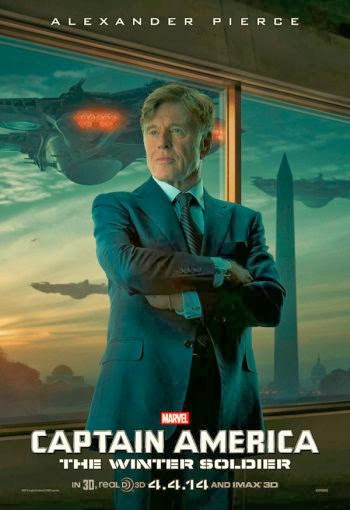 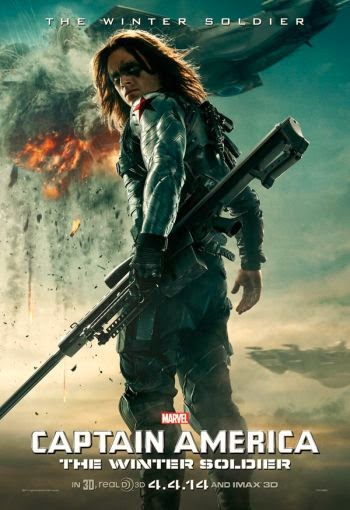 Read-up more on the making of Captain America: The Winter Soldier feature by The Star as well as an exclusive interview with pop-culture icon Samuel L. Jackson. CinemaOnline has also identified 5 facts of this upcoming movie worth noting from their online article.

Thanks to our friends in Disney, Malaysian cosplayers got an exclusive opportunity to attend the movie Premiere in full costume earlier this week at TGV Sunway Pyramid and TGV 1 Utama: 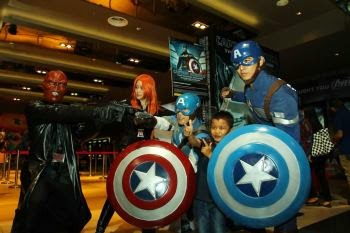 Most comic fans have been giving Captain America: The Winter Soldier their thumbs up. So less discount their  geek-biased reviews and offer instead opinions  from CinemaOnline and The Telegraph UK. 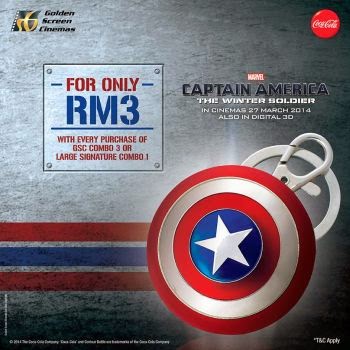 Movie fans looking to bring home a piece of Captain America may want to head over the GSC Cinemas offering an mini-shield replica keychain for only RM3 with purchase of their popcorn and drink combo. Hardcore fans may wish to run over to the nearest GSC cineplex as word is these exclusive keychains are running out fast! There was also an exclusive movie collector's edition booklet offered with advance ticket purchases which may still be available. It contains mini-poster, features on main characters like Steve Rogers & Natasha Romanoff plus a comic strip adventure of them as prequel to the new movie.

MBO Cinemas is instead offering a Captain America protein shake bottle together with their drink and popcorn combo for RM15. The bottle contains a metal coil ball to thoroughly mix your super soldier protein serums! 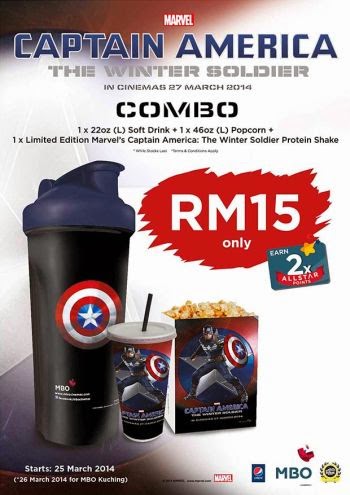 Meanwhile, Cathay Cineplexes is offering a limited edition set of 4 Captain America coasters with their popcorn and isotonic drink combo for RM10.90. 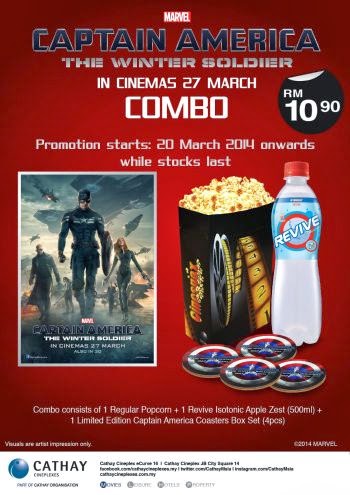 And finally, TGV Cinemas has another tumbler featuring Captain America artwork together with large popcorn for RM14.90. 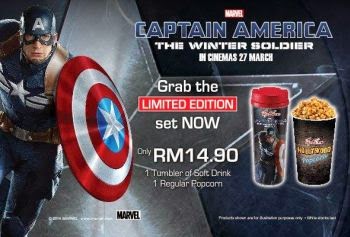 GSC Cinemas is offering these cool items through their website contest for members until, while TGV Cinemas is rewarding them to customers of their online ticketing by their Watch & Win promo until 10 April 2014. 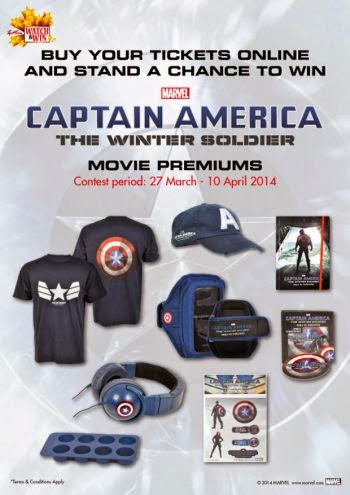 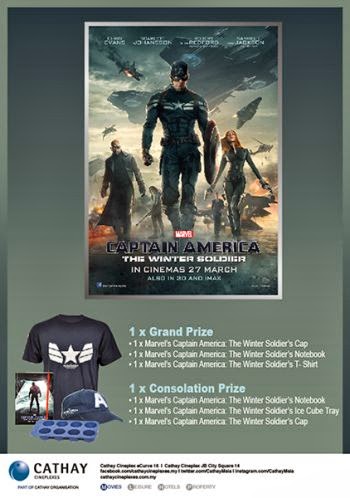 Meanwhile, customers of The Mines Shopping Centre an redeem Captain America giveaways like notebook and stickers as well as take a fitness challenge to redeem movie tickets. RHB cardholders may make redemptions at lower spend. There are also a series of kids activities these school holidays offering more giveaways. 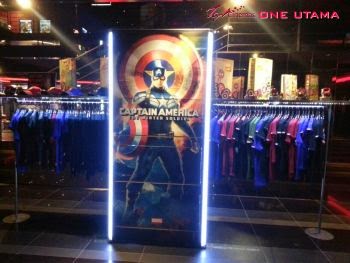 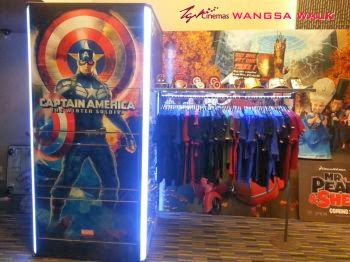 Kids looking to relive Captain America's adventures can beg their parents for official toys available from Hasbro. There are a variety of 3.75in action figures for RM49.90 as well as role-play toys of Captain America's infamous shield and other S.H.I.E.L.D. gadgets. 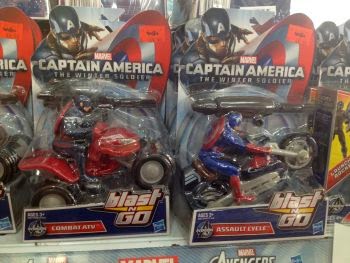 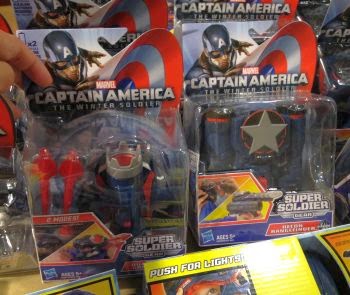 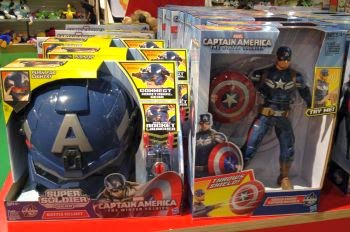 Toy collectors will also be delighted with the 6in scale Marvel Legends series action figures providing more details and articulation of the iconic superheroes. This Build-A-Figure Collection offers parts to build a S.H.I.E.L.D. Mandroid with each of the 6 figures (plus 2 variants). Unfortunately the Mandroid torso comes with Black Widow which is near impossible to find!

While there is no official product for The Winter Soldier movie, LEGO fans can still delight themselves with Captain America vs. Hydra set 76016 where Steve Rogers gets to face-off with his nemesis, Red Skull. 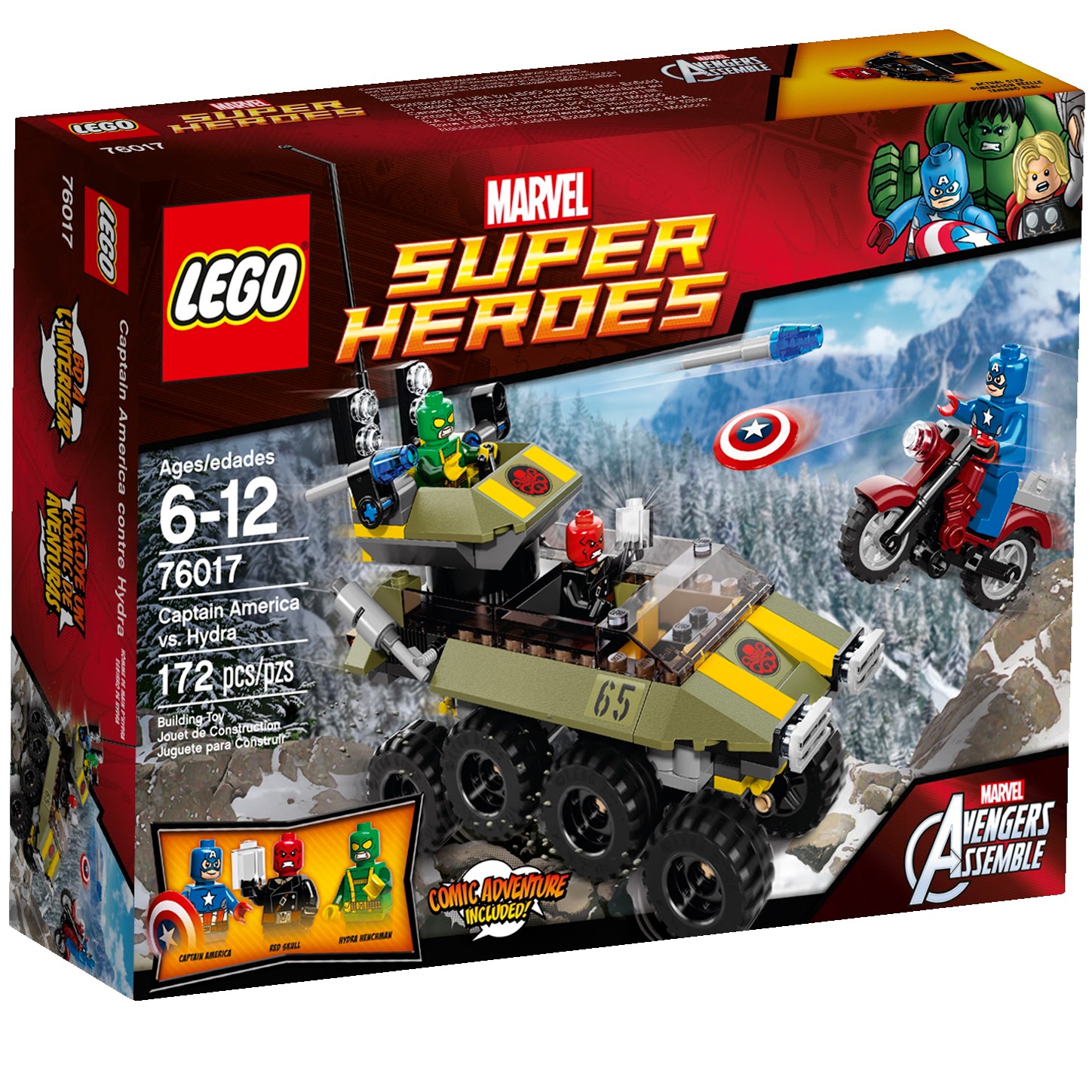 High-end adult collectors can look forward to the series of Hot Toys 1/6 scale figures coming up for Captain America: The Winter Soldier. Steve Rogers is featured in his Golden Age uniform, a variant of his World War 2 costume. Black Widow is looking hot in black while bad bay Winter Soldier also gets a mean-looking scuplt. Pre-order now and hold out salivating until delivery towards year-end. Until then, feast on the prototype photos on the official Hot Toys Facebook Page Photo Albums. 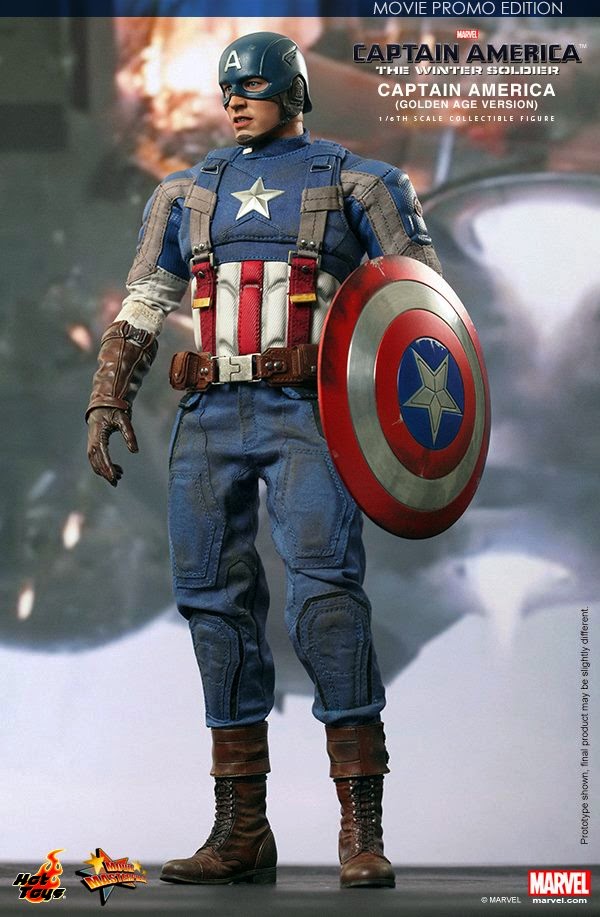 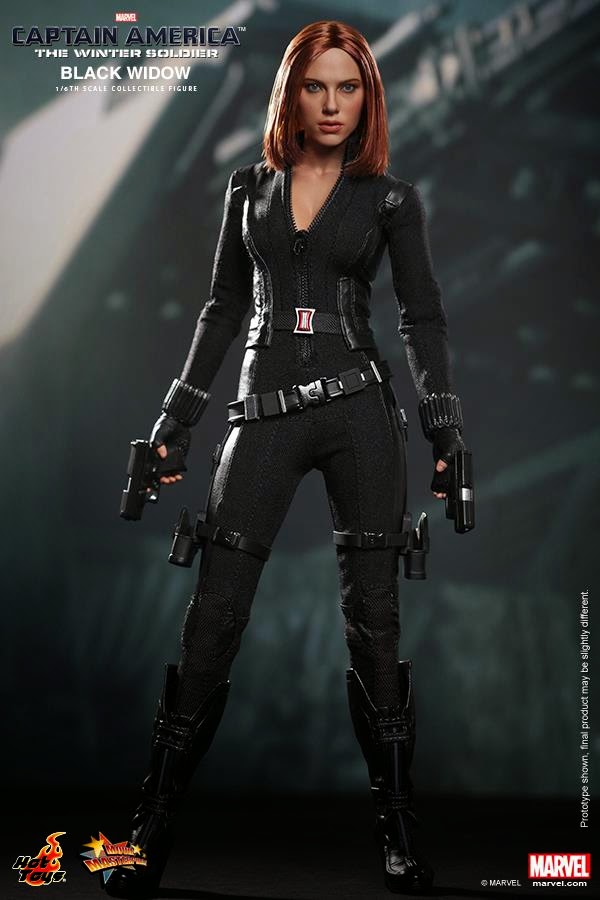 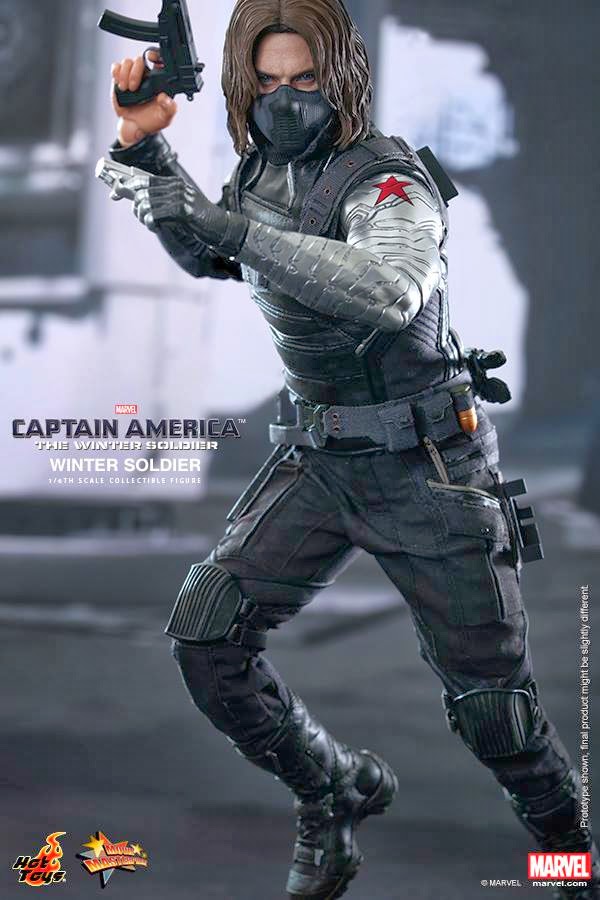 Captain America: The Winter Soldier delivers a combo of high-octane action and intrigue with repercussions across the Marvel Cinematic Universe, teasing delightfully of the next Marvel epic, Avengers 2: The Age of Ultron, as well as more Marvel heroes in the pipeline, like one Stephen Strange!

And finally a reminder... 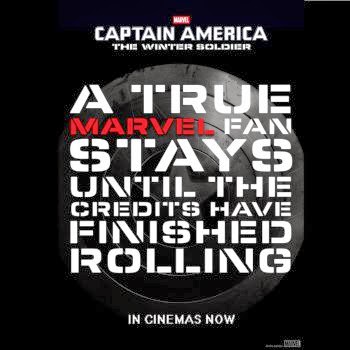 Disclaimer: Captain America and its trademarks are copyright to Marvel Entertainment, referenced here for fan service announcements without intent to infringe.