Outpost Expeditions offers movie fans, comic geeks, cosplayers & costumers, gamers, & other like-minded enthusiasts the opportunity to experience western pop culture conventions around the world. From Singapore Toy Game & Comic Convention (STGCC) nearby to New York Comic Con NYCC) our expedition package will delivery an engaging pop culture con experience to be remembered! Plus visit world-famous attractions in the host city whilst you're there.

This northern hemisphere summer, the "Nerd deities" have neatly aligned 3 major pop culture conventions to enable our expedition team to present the ultimate NERDTASTIC Convention Roadtrip. Over 24 days, our "Away Mission" will cover Gen Con, Star Trek Vegas and D23 Expo plus visit to the "Happiest Place on Earth", Disneyland!

The expedition kicks off at GEN CON in Indianapolis from 30 July to 2 August. Now in it's 48th year, Gen Con's "The Best Four Days in Gaming!" has become the largest annual consumer fantasy, electronic, sci-fi and adventure game convention in North America. With an avid following of more than 120,000 consumer and professional attendees, Gen Con is THE destination for everyone from serious fans, to those simply interested in casual gaming. Game manufacturers and publishers consistently utilize Gen Con as the place to launch new games and new products, show off the latest and greatest game expansions and features, and host incredible tournaments. 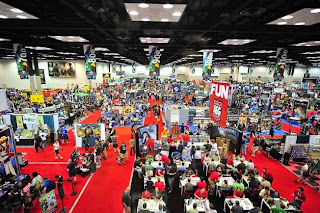 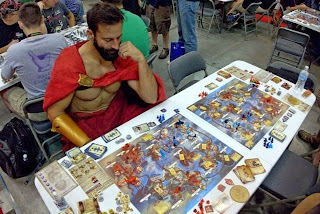 Find out more at the official Gen Con website.

From Central US, the expedition team will beam across to Southwest US to Las Vegas, Nevana for The Official STAR TREK Convention from 6-9 August. For the 2015 convention, Star Trek Vegas promises even more elaborate props and sets for photo taking, museum quality Star Trek items on display, MORE space than ever had before, an incredible guest speaker line-up, glorious technological advances in the main theatre, interesting new panel topics, fandom’s most elaborate evening parties, lots of freebies featured in an even more upgraded “Promenade”, the famous free karaoke nights, a more upscale Quark’s bar, special events honoring the 20th Anniversary of Star Trek: Voyager, our fond remembrances of our dear friend and show business legend Leonard Nimoy, a Saturday Evening Gala Nevada Pops Orchestra extravaganza, and of course the surprises and other elements that separate this particular convention from all others. Over 100 celebrity guests are expected to be attending including William Shatner, George Takei, Kate Mulgrew, Karl Urban, Jeri Ryan, Walter Keonig, Jonathan Frakes, Marina Sirtis, Michael Dorn, and many more. 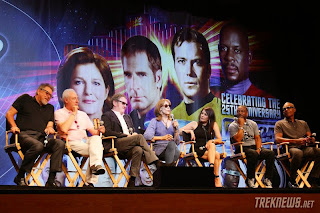 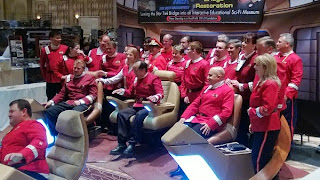 After a couple of extra nights in Vegas plus visit to the spectacular Grand Canyon, the expedition heads over to Anaheim, California. All the magic and excitement of the past, present, and future of Disney entertainment will come together once again under one roof on August 14-16 when D23: The Official Disney Fan Club presents D23 Expo 2015 at the Anaheim Convention Center. D23 Expo provides “inside-the-magic” experiences, including exclusive sneak peeks at upcoming films from The Walt Disney Studios, dazzling celebrity appearances, unforgettable presentations given by Disney luminaries, a look at what’s coming from Disney Parks and Resorts and Walt Disney Imagineering, the Disney Legends ceremony, and the Treasures of the Walt Disney Archives exhibition, which spotlights crown jewels from Disney’s timeless legacy. Plus expect big reveals for Marvel and Star Wars franchises here! 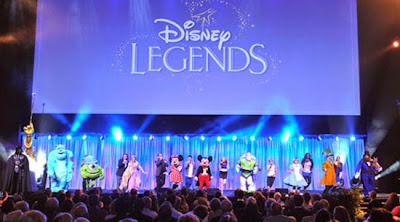 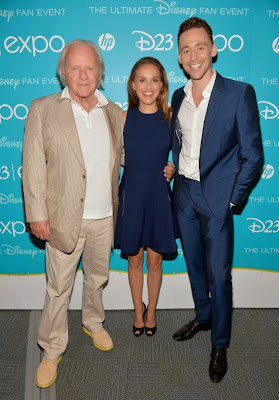 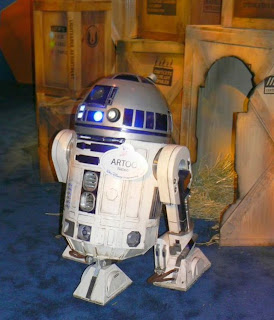 Learn more about D23 Expo from the official D23 website. 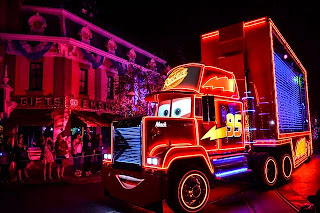 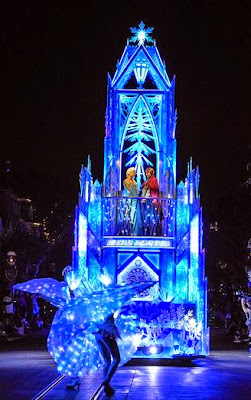 Expedition Itinerary
Based on departure from Kuala Lumpur, Malaysia or United States.

Day 23 to 24: Wednesday 19 August to Thursday 20 August
Return travel back to Kuala Lumpur

HERE'S YOUR UNIQUE CHANCE TO ATTEND
3 CONVENTIONS FOR THE PRICE OF 2!

Excludes US visa (RM592), meals (recommend RM2,350 for 22-days), souvenirs, tips.
Costs shown are subject to change at time of booking based on prices from vendors and currency exchange rate. Early flight and accommodation bookings are highly recommended to maximise cost savings.

Options for individual convention itineraries, check our Facebook Page Notes:
For further information and travel arrangements, e-mail us here with subject heading "Outpost Expeditions". Travel bookings for the Nerdtastic Convention Roadtrip will tentatively close mid-June 2015, so act fast and get in touch with us!

Disclaimer: Information presented for fan engagement only as event attendees. Outpost Productions is not associated with Gen Con, CBS or Paramount, Disney or D23 nor represent any of their trademarks & properties for commercial purposes.

May the Brick be with you! Celebrating Star Wars Day at LEGOLAND Malaysia


Outpost Productions continued our Star Wars Day celebrations shuttling to LEGOLAND Malaysia immediately after closing up May the 4th be with 2 at Jaya Shopping Centre. Our contingent of costumers huddled up on a chartered bus for the overnight journey to Johor Bahru.

The parade commenced from LEGOLAND Hotel to line-up at the park main entrance for photo opportunity. Then the fan groups marched into the park heading to the Star Wars Miniland exhibit via various photo checkpoints along the way.


For those who have not yet visited Star Wars Miniland, the exhibits comprise recreations of scenes from the six movies plus the Clone Wars using LEGO. Some displays include interactive features with push of a button such as the Millenium Falcon taking-off, duel of Anakin vs. Obi-Wan, and many more.

One of the major celebration activities was the LEGO My Own Creation Competition organised by LEGO User Group of Malaysia (LOM). A wide assortment of customised LEGO Star Wars displays were assembled by LOM Master Builders. Winners were chosen by representatives from LEGOLAND Malaysia and awarded Star Wars LEGO sets deserving of their creative efforts.


Find more close-up photos of this masterpiece at the Eurobricksforum. 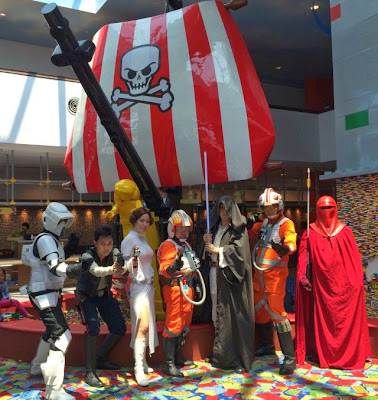 Of course, costuming or cosplay is a BIG part of Star Wars Days and there was no shortage at LEGOLAND Malaysia. The Outpost Costuming Expedition team comprised:

In additional to meet & greet photo opportunities with visitors throughout the park, we also took the opportunity for some thematic photo antics.

Check out more photos from the official LEGOLAND Malaysia FacebookPage. Plus online coverage by The Star as well as The New Straits Times (below): 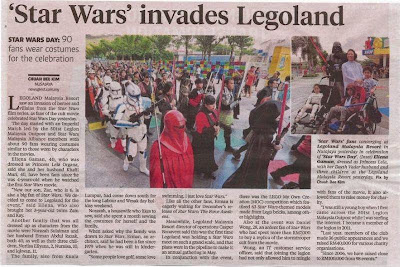 Until next year, MAY THE FORCE BY WITH YOU! 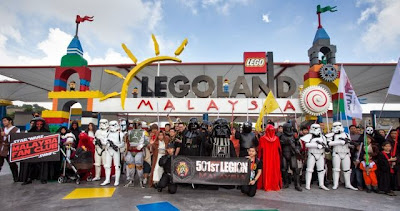 Disclaimer: Star Wars and other trademarks are copyright to Lucasfilm and/or Disney, referenced here for fan service announcements without intent to infringe.
Posted by Outpost Productions No comments: 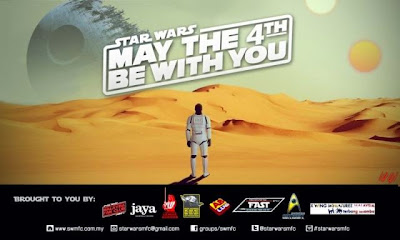 May the 4th is traditionally considered by Star Wars fans all over the world to be the official annual celebration to commemorate and celebrate their fandom. As it is, the first Star Wars event to celebrate May the 4th was actually held a couple of days earlier on May 2nd at Jaya Shopping centre. Some 500 fans or more were seen crowding around booths displaying models and figures, as well as the unmistakable presence of costumed characters.

This particular Star Wars day gathering, called “May the 4th be with 2” was the brainchild of the Star Wars Malaysia Alliance, of which Outpost Productions is a participating fan community. The other groups that make up the Alliance at this event comprises The Star Wars Malaysia Fan Club, Force Art Stunts Team (FAST), The Lightsaber League of Malaysia, Asia Brick, 601st The Outlaw Garrison, Peperangan Bintang and finally the STAR WARS: X-Wing and Armada Malaysia . As you can guess from their names, these groups represent different aspects of the Star Wars fandom, from costumers, to lightsaber collectors, to Star Wars Lego model builders, figurine collectors and fans of starship replicas, both Imperial and Rebel forces .

The day started off with an adrenaline filled lighsaber battle performance by FAST, who all lived up to their name by performing moves so rapidly, your eyes can hardly keep up with their brightly lit blades. Of course audiences had to be reminded not to try these stunts at home as FAST members undergo strict Padawan training before they go up on stage.

Later on in the day, there was a special parade of costumed Star Wars fans from the 601st Outlaw Garrison, including the intimidating (but surprisingly friendly) Darth Vader, followed by a slew of Imperial Stormtroopers and other Sith Lords, like Darth Nihilus. There was even a Tusken Raider in their midst. They were accompanied by several Younglings, some dressed as Mandalorians, and some in Jedi outfits. They were immediately swamped by members of the public wanting to take pictures. Apart from the costumers on parade, several others dressed as Princess Leia, Jedi Masters and Padawans, Sith Lords, Tusken Raiders, Mandalorians, Ewoks and Stormtroopers (one in a suit with a moustache) were seen mingling with the crowd.

On the Outpost Productions side, there was a Charity Raffle and Auction with all proceeds going to the UNICEF Nepal Earthquake Children's Appeal. In total, RM 1510 was raised from the generosity of Star Wars fans present. At the Auction, several Starship replica models went up for bids, including TIE fighters and an X-wing fighter.


Even though things started out slow with bids coming in at snail’s pace, things really heated up and the highlight of the session was the intense bidding war for the X-wing fighter which was finally sold for RM250. The charity raffle tickets on the other hand, were completely sold out minutes before the lots were picked, and all the lucky winners received their prizes from a lovely, grinning Princess Leia.


Walking around Star Wars day was also a feast of creativity, as you could see fans giving their personal interpretations to favourite scenes and characters. For example, the Peperangan Bintang project, a wayang kulit (Shadow Play) version of Star Wars characters handmade by Tintoy Chuo and his creative partner Take Huat. Their little group of puppets have become household names in promoting the traditional but dying art form. There was also a booth selling Star Wars baked goods, with a completely edible Jar Jar Binks head on a silver platter ( yes, we all know how fans feel about him), as well as cookies inspired by Chewbacca.


Let’s not forget another important highlight of the day, which was the largest gathering of Lighsaber owners in Malaysia, with collectors coming all the way from East Malaysia to meet their fellow brethren. More than 50 of them posed for photographs with their lightsabers of various colours, making it look as if a swarm of Jedis had landed in PJ. Of course owning a lightsaber is never enough and one must know how to use it (with the force!). Therefore the Lighsaber League of Malaysia was on hand to give a short course on how to wield the weapon, which proved to be a very popular session with the Younglings. Yes, start them young we say. Apart from that, junior Star Wars Fans were given a treat when a colouring contest was held for them to express their love of the franchise. 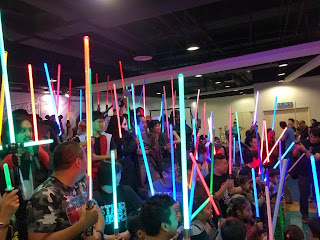 Impressive collections of Star Wars miniature starship models including not one but two Millennium Falcons were also a hit with fans, as were Asia Bricks lineup of their member’s creations. A section featuring Star Wars miniature games like X-Wing and Armada completed the day’s events.

The whole event felt cosy and homely as you could see the different generations of Star Wars fans in the country, with the not so young ‘pioneer’ generation who grew up with the original trilogy, to generation who fell in love with Star Wars due to the prequel trilogy and the even younger fans who watched the animated spinoffs like Clone Wars and Star Wars Rebels. Truly the fandom is a family friendly phenomenon that people of all ages and backgrounds can connect over and feel a strong camaraderie.

So fellow citizens of a Galaxy Far, Far Away, until the release of Episode VII, May The Force Be With You! 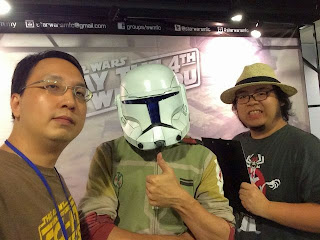