A new Man of Steel is forged! 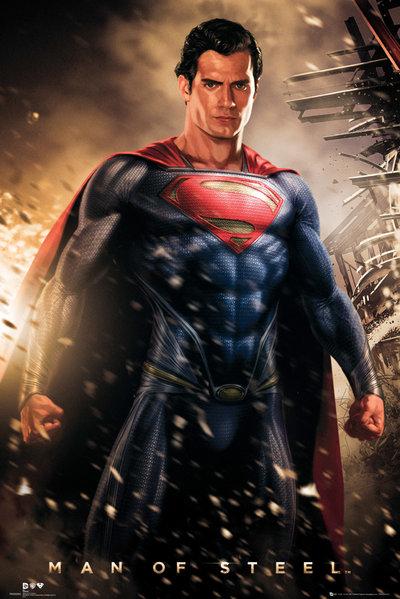 Following the great success of rebooting Batman in the Dark Knight Trilogy, DC and Warner forges a new Man of Steel bringing the last son of Krypton back to the silver screen. This new  origin of Superman is helmed by visionary director Zack Snyder with producer Chris Nolan of Dark Knight infamy together and  veteran superhero film writer David S. Goyer. Henry Cavill dons a new blue suit and red cape (but without red underwear on the outside) as Kal-El / Clark Kent with Amy Adams as Lois Lane, supported by Hollywood heavy weights such as Russell Crowe as Jor-El, Kevin Costner as Jonathan Kent, etc. With powers akin to a god, only a global threat to humanity from fellow Kryptonians led by General Zod provide a comparable adversary to Superman, with their battles resulting in cataclysmic destruction to landscape. Man of Steel is now showing at cinemas nationwide in 2D, 3D and IMAX 3D.

Get behind the scenes with Zack Snyder and the cast of Man of Steel in this extended featurette:

If you're still undecided whether this movie is worth your 2 hours and 22 minutes, read-up CinemaOnline's 4-star rating review here.

Superman fans may be excited to head over to Midvalley Megamall today to engage in various Man of Steel interactions: 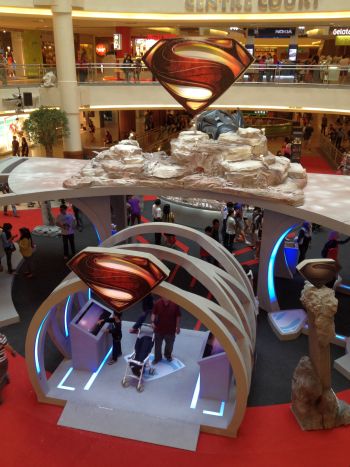 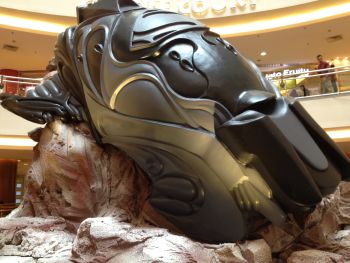 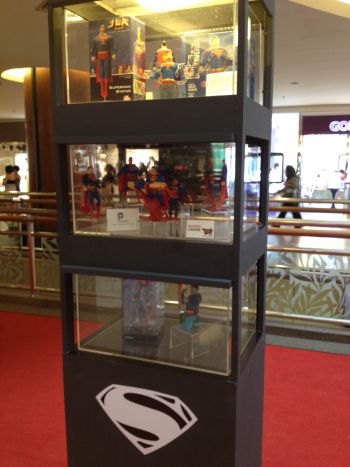 Find out more at Midvalley website and head over quickly to Centre Court as this Man of Steel exhibit ends on 16 June 2013. If you've already missed out, the Outpost Movie Recon Team (MRT) has identified the following Man of Steel promos to appease your appetite:

For those who haven't gotten tickets yet to Man of Steel, Maybankard Visa Debit card users spending over RM200 at participating shopping mall in Penang, Kuantan, Kota Kinabalu and Melaka can redeem 2 passes for movie screening at GSC cinemas. Goto Maybank2u.com for more details.

Or if you can wait till 20 June to watch Man of Steel, purchase your tickets online with TGV cinemas and stand a chance to official movie merchandise.

While at the cinemas, you can take home your experience of the Man of Steel with these exclusive merchandise. Superman will be bursting out of your drink from the exclusive cup toppers sold at Cathay Cineplexes, while GSC Cinemas offers a cute red caped drinks tumbler. 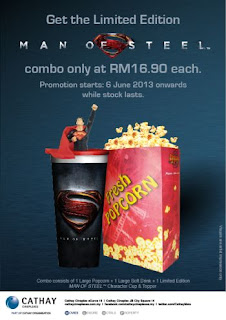 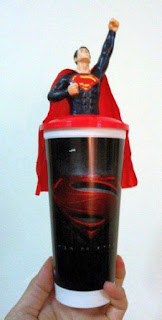 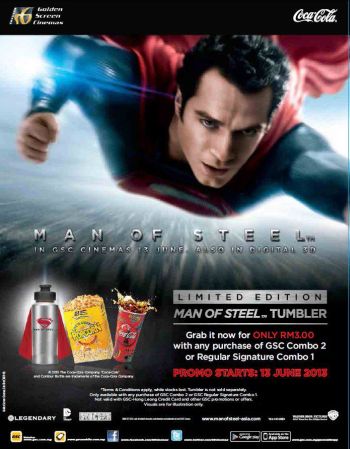 .
More Man of Steel merchandise is also available from these cinemas through the GSC's website contest and Cathay's Facebook contest.

Whilst there are assortments of Man of Steel merchandise available like kids tshirts, apparel and stationeries, the MRT prefer to highlight more thematic memorabilia for movie fans such as the Movie Masters series action figures below from Mattel. Find them at the nearest Toys R Us or department store. 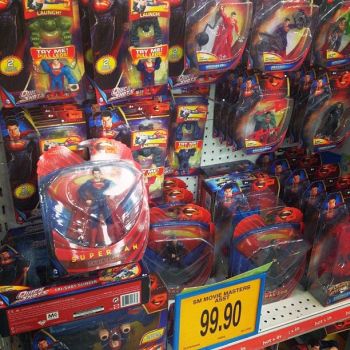 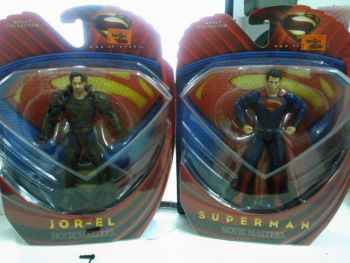 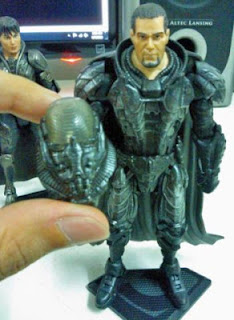 And brick builders would also be delighted with official Man of Steel LEGO sets recreating scenes from movie, and subsequent destruction once Kryptonian fists clash (just drop your LEGO on the floor and watch them fall apart like Metropolis in the movie!). These sets seem bit hard to find and might have better pickings at various Toys R Us or LEGO themed hobby shops. 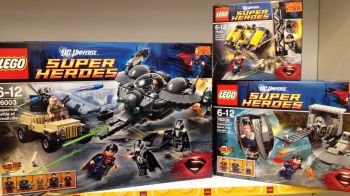 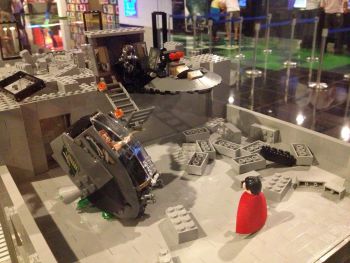 For those who are looking for Man of Steel apparel, you can use your ticket stubs from Cathay Cineplex to receive 20% off from DC Comics Super Heroes. 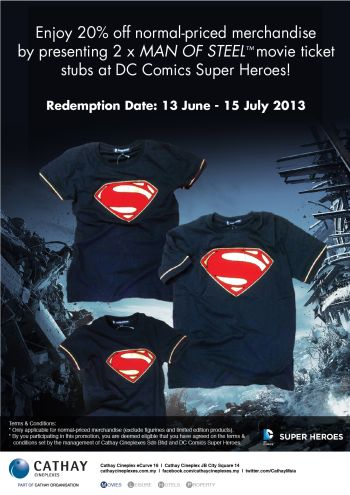 Needing a close shave? Purchase your shavers from Schick and you may win some Man of Steel merchandise; enter online with proof of purchase. 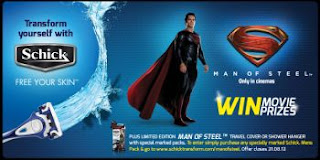 When shopping at Parkson, receive a limited edition Man of Steel mug with purchase of over RM100 Superman / Man of Steel products. 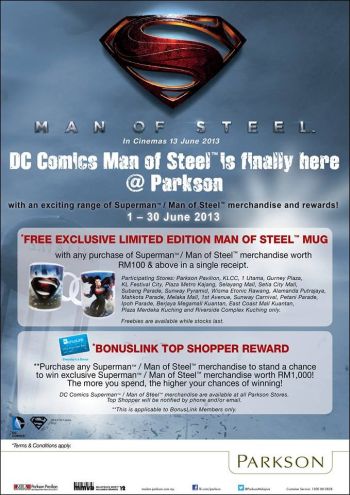 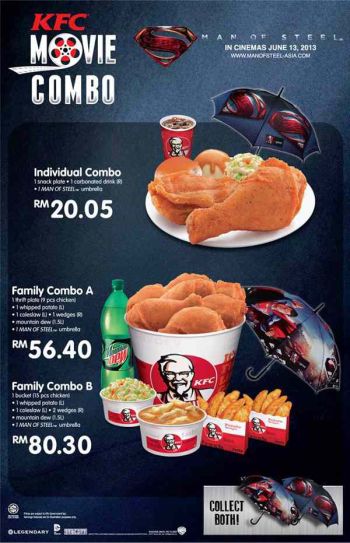 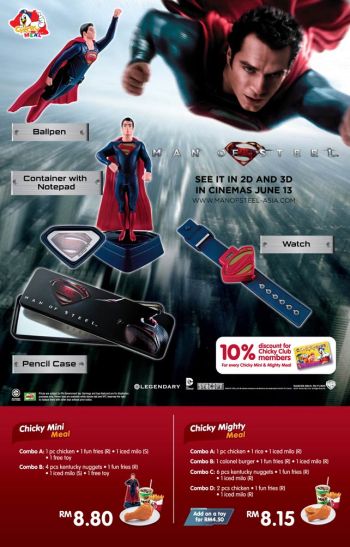 Hope the Outpost MRT has provided some useful fan engagements above for the Man of Steel. Until the next recon report... up, up and away!

Disclaimer: Superman / Man of Steel and its trademarks are copyright to their respective owners, referenced here for fan service announcements without intent to infringe. 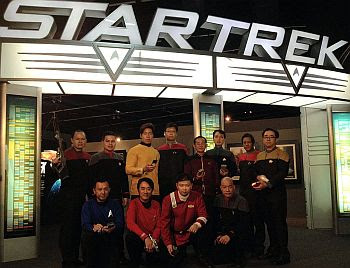 2013 has turned out to be an amazing geek-out year for Malaysian Trekkies living out their "Holodeck Adventures" of Star Trek. The year dawned with Star Trek: The Exhibition taking place in the National Science Centre / Pusat Sains Negara (PSN), Kuala Lumpur, where every serious Trekkie in the region should have beamed over. On top of hundreds of authentic props, models and costumes from the venerable sci-fi saga, even a Vulcan would have found it hard to suppress delight for the opportunity to "take command" of the Enterprise-D from its replica bridge, or to "beam up" on the transporter platform. Read our previous  survey of Star Trek: The Exhibition for further details, or feature article by The Star. The exhibition has since been concluded on 7 April 2013 and is now hosted in Taipei, Taiwan. Get latest updates from the official Facebook page.

Here's some snapshots of Trekkie Away Teams at the exhibition: 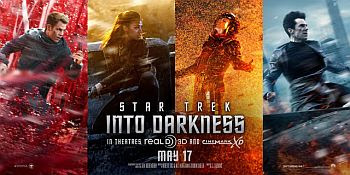 Following the success of 2009's Star Trek movie reboot, JJ Abrams sequel Star Trek Into Darkness finally blasted back into cinemas in May 2013. Malaysian Trekkies revelled again and turned out in force at a special Star Trek fan preview of the movie on 10 May 2013, presented in IMAX 3D at TGV cinema, 1 Utama. Fans generally responded with a firm thumbs up for Star Trek Into Darkness, often teased by aspects of the original series incorporated into this new reboot timeline... well, except perhaps the fan which screamed "Nooooo!" at the big reveal during the preview! Every visual effect was simply stunning in IMAX 3D and no doubt many fans would have returned to the cinema for 2nd or more viewings by now. For further opinion, check out this review by CinemaOnline, plus a few other opinions compiled by Says.Com.


If you want to bring home a piece of Trek, the Outpost Movie Recon Team (MRT) was hard pressed to find any official Star Trek merchandise about Malaysia. Official movie toys for Star Trek Into Darkness are Kre-O brick building products from Hasbro, which unfortunately are not being brought officially into Malaysia and no sign of them from any local retailers. Otherwise find them online from BigBadToyStore or Entertainment Earth, which ship to Malaysia.

Star Trek boardgames may be available at local Borders and Times bookstores, plus some hobby gaming shops like Toybox and Meeples. Previously sighted were Star Trek Expeditions (based on reboot movie), Catan, Fleet Captains and Deck Building Games (based on Next Generation series).

Outpost has a handful of Star Trek 6in action figures by Playmates from the preceding 2009 movie as pictured below. Please e-mail toys@outpost.com.my if interested to purchase. 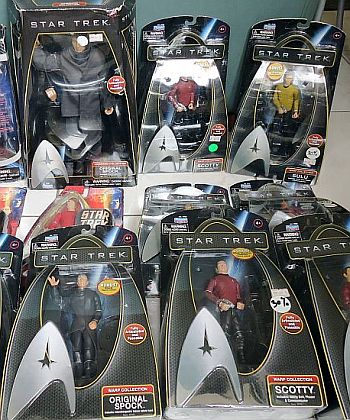 While the new Enterprise mess hall hasn't been featured yet in the movies, it could be serving Galactic Burgers like these from Burger King: 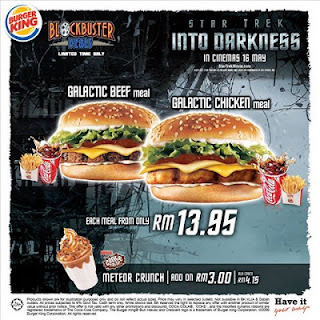 Or try your luck to win some a Star Trek Into Darkness mini-joystick and other non-Trek stuff via the GSC Watch & Win contest: 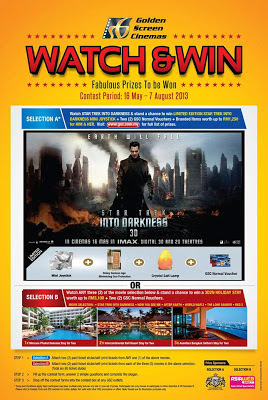 Outpost is also giving the opportunity to our Trek followers to snag Limited Edition Star Trek glow-in-the-dark posters and 6in action figures. Just submit your entries via Punchtab below by 15 June 2013 for a chance to win a toy action figures. The first 3 qualifying entries will also receive the limited edition poster. So join now and get your friends to support this giveaway!

2. Participation is open to all residents in Malaysia. Outpost Events personnel are not eligible to particpate.

4. Winner of the action figure will be randomly selected amongst qualified participants with correct answer to question.

5. Winner will notified within 7 days of promo closing for giveaway collection arrangements. If the winner does not response within 14 days of notification, the giveaway may be awarded to next qualified participant. Postage charges may be required if giveaways cannot be personally collected.

6. Outpost Events as the organiser reserves the rights to change these terms and conditions without prior notice.

Disclaimer: Star Trek and its trademarks are copyright to their respective owners, referenced here for fan service announcements without intent to infringe.
Posted by Outpost Productions No comments: