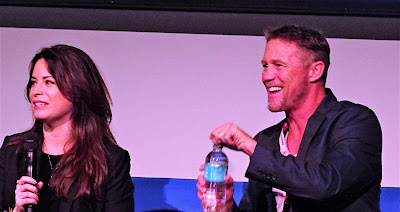 Kicking off celebrity guest panels on Friday were Holly Marie Combs and Brian Krausse from supernational TV series Charmed (1998 to 2006). Holly was one of the principal cast playing the good witch Piper Halliwell for 8 seasons. Brian Krausse was one of the supporting cast members playing Leo Wyatt, a guardian angel to the witches and Piper's husband. After a few movie trailers from sponsors, a convention emcee briefly introduced the two Charmed alumni and proceeded to field questions from the audience.

When asked about how she prepared for the role, Holly shared that she initially studied wicca and demonology at the start of the series. However during the first couple of seasons viewers sent feedback that the witchcraft practices depicted were either too accurate or totally wrong. The producers then hired a resident demonologist to consult on these supernatural elements in the show.

Holly also shared that when the series launched the network itself did not expect Charmed to do well. So there was no preconceived expectations by the network and therefore Charmed surpassed all expectations producing 178 episodes over 8 seasons.

The celebrity panel Wonders of the Whedonverse was up next showcasing one of televisions most prolific stars Nathan Fillion (Firefly / Serenity, Buffy the Vampire Slayer, Castle) together with Enver Gjokaj (Marvel's Agent Carter, Dollhouse).

Like Charmed, Nathan shared that when Firefly was launched there were no expectations. But unlike the hit supernatural drama series, this sci-fi drama series was cancelled after only 14 episodes in 2002. Nevertheless in that short time the series garnered a cult following which lead to the cast reuniting for a feature length movie Serenity in 2005.

Nathan also said that back in the day everything that he had ever wanted to do on television he achieved in the Firefly pilot: fly a spaceship, ride a horse, shoot bad buys, get shot, etc. 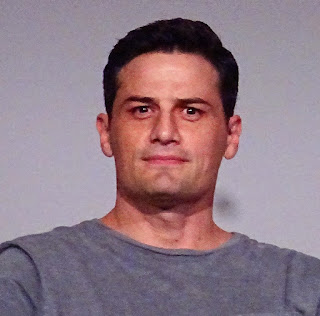 About Agent Carter, Enver praised that “everyone is great” on the show. The Marvel mini-series also presented him an opportunity to be part of a main cast instead of odd roles as “the Russian guy being punched”.

Both actors praised Joss Whedon having given them opportunities in lead roles without having prior experience as leads simply by telling networks “I want this guy”. Nathan termed it nicely saying “Joss Whedon elevates you” and “If Joss has a role, say yes”. On the latter remark, Nathan did exactly that by agreeing to Dr. Horrible without realising it was a musical comedy.

When asked on how they portray their characters, Nathan replied for Castle he played on his flaws, such as vanity. About playing funny roles, he pointed to timing of jokes and his experience on Two Guys, a Girl & a Pizza Place. He also took Matt Le Blanc from Friends as an example of not trying to be funny but instead pretending Joey to be smart for jokes to get across. For Enver, he advised that when the lines are good, just “play it straight and don't over-act”.

Towards the end of the panel session, Nathan offered a joke: “How does a Reaver clean his weapon? He runs it through a Wash”. For those who didn't get it, go watch Serenity.

Fans of DC's Suicide Squad last year would not have missed the deadly Japanese sword-wielding heroine Katana. Her real-life alter-ego is Japanese-America actress Karen Fukuhara from Los Angeles. Whilst super-serious Katana was a woman of few words, Karen was all bubby and excited to be in Australia speaking in American English without stereotypical asian accent.

Karen shared that she auditioned for Katana in Los Angeles without knowing what was the role for. However she did find a martial arts instructor to show her some moves for the audition. She found out later the audition was for Katana when meeting the Director David Ayer and given DC comic books to study.

About filming Suicide Squad, she was grateful to Will Smith's efforts to cheer-up the cast during long hours of shooting, especially when they suffered through the rain scenes. About other cast members, she loves the Aussie accent as spoken by Margot Robbie (Harley Quinn) and Jai Courtney (Captain Boomerang). The cast also bonded well and for parting gifts Karen was given some adult toys, much to the shock of her mom when opening her luggage after returning from shoot; Karen still lives with her parents. 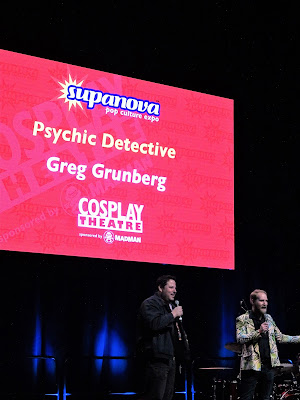 Well-known as Matt Parkman from Heroes (2006-2010), Greg Grunberg has more recently appeared in two mega sci-fi franchises: Star Wars The Force Awakens as Temmin “Snap” Waxley and Star Trek Beyond as Commander Finnegan. This was Greg's first time in Australia and he's terrified of encountering scary spiders. He's currently publishing his first kids graphic novel Dream Jumper based on his son's dreams as a superhero in other people's dreams. Greg would really like to add the Marvel Cinematic Universe to his credentials.


About Star Wars, he's known JJ Abrams since 4 and told JJ he would take on any role offerred in the saga. He got to meet the cast of The Force Awaken in London where during his first scene off-camera the late-Carrie Fisher walked up to him grabbing his @$$ with “Welcome to Star Wars”.

On the set, Greg had a blast in the full-sized X-Wing cockpit with fanboy moments repeating all lines from Jek Porkins of the original Episode IV, A New Hope. He was only given schematic for the flight controls 5 minutes before shooting in the cockpit and laughed that the buttons fall out. He also shared that Oscar Isaacs playing hotshot pilot Poe Daemoron was actually on the verge of throwing up after 5 minutes in the motion-simulated cockpit.

Touching on the recent Heroes Reborn (2015), Greg apologised to fans for it. He shared that he was originally called back to the series as really evil Matt Parkman so he initially declined returning unless Parkman got a redemption scene. However after shooting started for the series, that redemption scene seemed to have been forgotten. 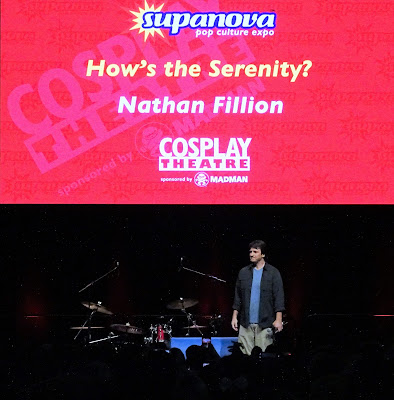 On the final day of Supanova, Nathan Fillion held a solo panel packed out by fans. When asked on what was his most challenging experience, Nathan replied that it was carving out a career in acting because there are not enough jobs available.

Some of his other responses to questions from the audience include: 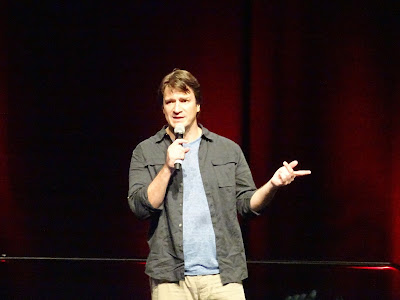 Celebrity guests were available at scheduled times during the convention for photo opportunities with fans and autograph sessions; fees charged.

Check out Supanova's official website for this year's celebrity guests at their conventions throughout Australia in Gold Coast, Melbourne, Sydney, Perth, Brisbane and Adelaide. For western pop culture fans in Malaysia, these Australia cities may be our closest destination to catch American acting talents in person. Of course, let's hope some day these will visit our shores.

After successfully saving their kind from the evil President Business in The LEGO Movie 3 years ago, the producers thought it would be a good idea to make another movie to tell the hero's tale, of how he's not just an ordinary guy but an orphaned minifig, growing up alone with no mentor. Enter the LEGO Batman Movie.

Some say Batman's a vain and selfish vigilante who longs nothing more than his vanity. And the fact that Bruce Wayne lives in his attic gives him extra flare and bragging rights and ego. Check out the trailer below:

However, with the addition of his adopted son (while drunk at a gala), Dick Grayson, Batman has to deal not only with crime & the Joker, but an overly enthusiastic, excited and loud sidekick who looks up to Batman as his dad and care giver. Talk about saving the world AND yourself from going BAT-$#!+ crazy!

Meet the "cast" of this new LEGO movie: 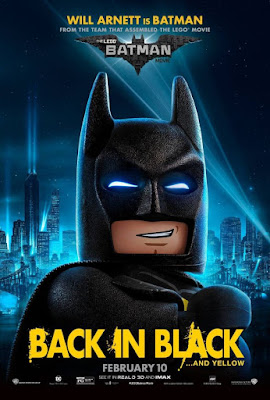 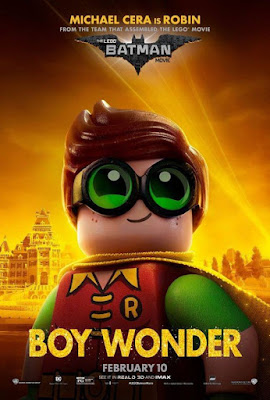 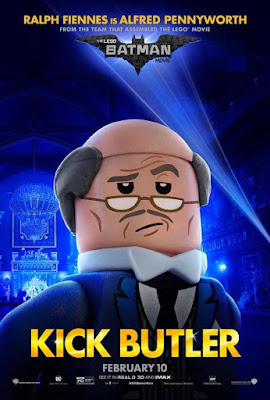 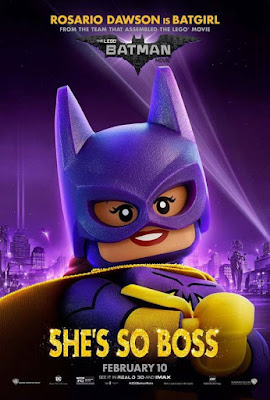 To understand more about the upcoming movie blasting into local cinemas this Thursday 9 February, watch the Behind-The-Bricks featurette narrated by Batman himself:

The Outpost Movie Recon Team (M.R.T) has found many goodies worth checking out if you're a fan of both LEGO & Batman (Duh!). First check out the official LEGO toys: 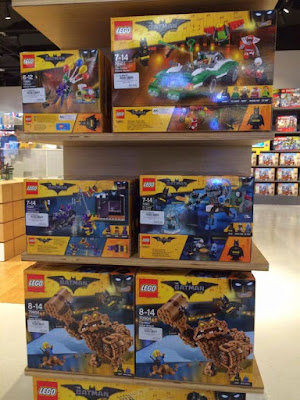 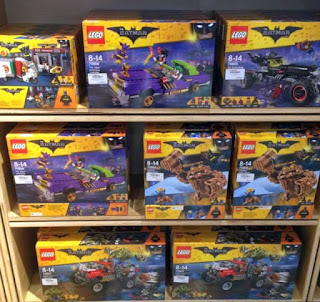 Each of his villains like Joker, Penguin, Clayface, etc. receive their own building sets, usually based on a vehicle. They also come together in a massive playset of the Arkham Asylum (70912, RM799.90) available exclusively from Toys R Us in Malaysia.

LEGO Batman also offers a series of blind-pack mini-figs with 20 variants of the cute characters to collect. However they are priced quite significantly higher at RM19.90 per pack compared to RM12.90 for the regular series. Happy "tikam"!

Check online for more details and prices at the official LEGO Stores or Toys R Us Malaysia.

Whilst the Outpost M.R.T. does not endorse any particular retailer, if you are going to buy these toys anyway then consider doing so at the official LEGO Batman Movie Event now on at Mid Valley Megamall, East Atrium. 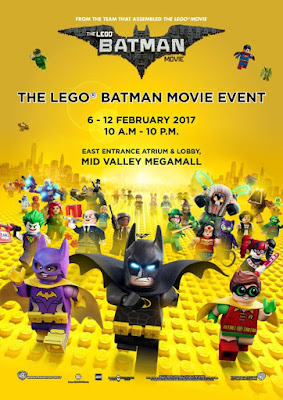 Buying directly at this event will entitle to a number of LEGO freebies depending on the amount spent. Firstly any purchase of of a LEGO Batman set will receive a sorta black flying vehicle inspired by the Dark Knight. We kinda think it looks like a MyVi with wings! However an assembly guide is not included with the bricks as purchasers seem to be encouraged to build them on-the-spot referring to laminated instructions (not to be removed). 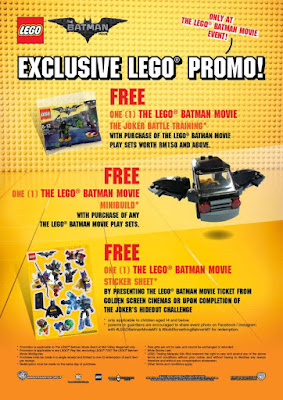 Purchases over RM150 then receive an exclusive polybag (30523) of The Joker Battle Training. In addition, purchases over RM200 of any LEGO product receives a Limited Edition Year of the Rooster building set (40234). Considering the price of LEGO nowadays, it doesn't take more than 1 or 2 sets to exceed the threshold to receive all 3 of these goodies FREE! Toys R Us members will also collect points for their purchases.


For those serious LEGO collectors, different giveaways seem to be offered by other retailers, such as this Phantom Zone polybag (30522) from Box of Bricks: 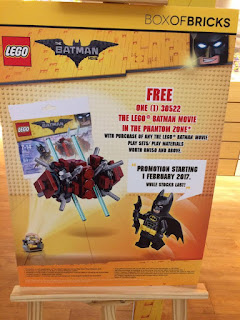 Anyway if LEGO is too pricey for the wallet, try winning some instead from these online contests by our local cinemas. Firstly GSC Cinemas has a fairly straightforward contest for their online members offering polybagged mini-figs, kids tshirts and more: 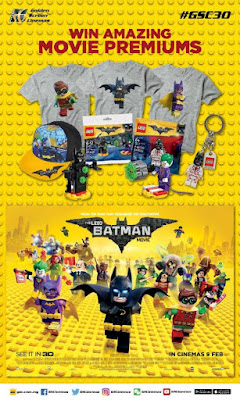 There will also be a "pop-up" store at GSC Pavilion KL this weekend from 9 February near the cinema. 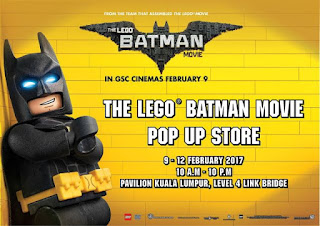 Both MMcineplexes and Premium-X Cinema is offering similar merchandise up for grabs on their respective social media channels: 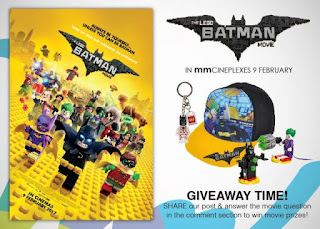 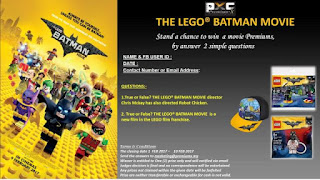 Over at MBO Cinemas, they are offering a LEGO Batman edition card for their All-Star membership (free). They are also encouraging cosplay of LEGO Batman movie characters and giving away building sets for submissions posted to Instagram. Good luck with that since we have hardly seen any LEGO cosplay locally! 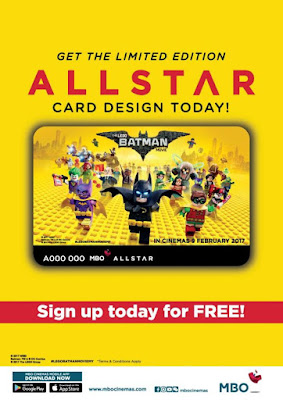 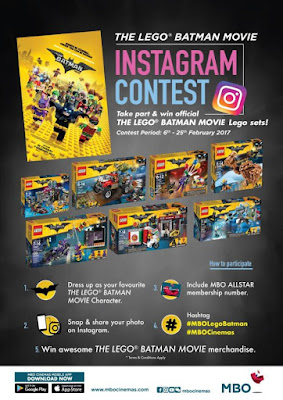 Coming back to that official LEGO Batman Movie Event at Mid Valley Megamall, our on-ground recon has identified more activities for fans and families. Catch LEGO Batman & Robin live at any of the 5 schedule appearance sessions daily. 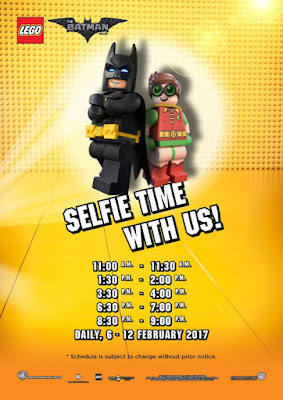 Here's what else to see at the event located at the East Atrium just outside Aeon and Uniqlo and below Toys R Us. 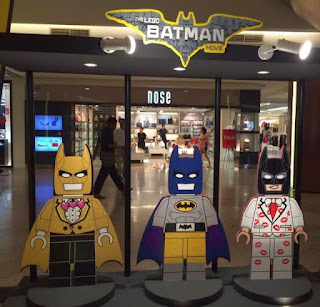 The movie building sets are displayed to woo kids to empty their parents' wallets, or "poison" adults fans of LEGO. Courtesy of LOM LEGO User Group Malaysia, these sets have been setup as a fantastic action diorama with the respective movie vehicles and mini-figs arranged in action. 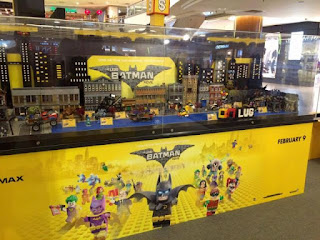 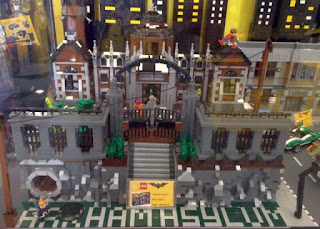 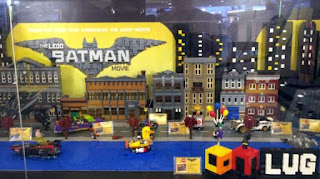 The Master Builders has even stretched their creativity to assembling 25 custom-build mini-dioramas depicting all forms of LEGO Batman inspired setups. Here's a only a sampling of the LEGO builds and do go see for yourselves the rest. Some are really LOL scenes! 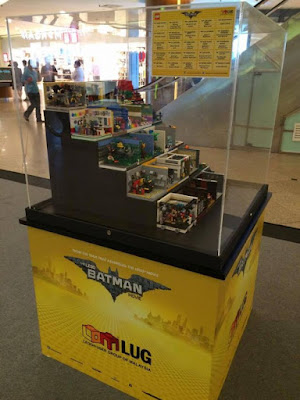 For the photogenic, a free photo booth is available for instant pics with the LEGO Batman movie backdrop. But if you're more of a closet fan, like Batman with leaving his home, here's something for you too!


Find out more on what's happening here from the official event listing on Facebook.

Remember, you can always be yourself... unless you can be Batman! 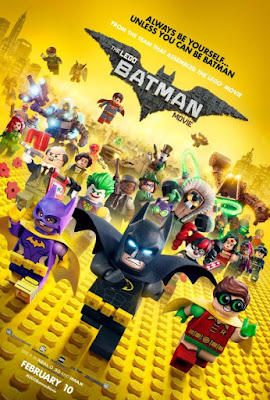 Disclaimer: LEGO, Batman and other trademarks are copyright to The LEGO Group, DC Entertainment, Warner Bros., and their respective owners, referenced here for fan service announcements without intent to infringe.