Hunting Galactic Loot with Guardians of the Galaxy 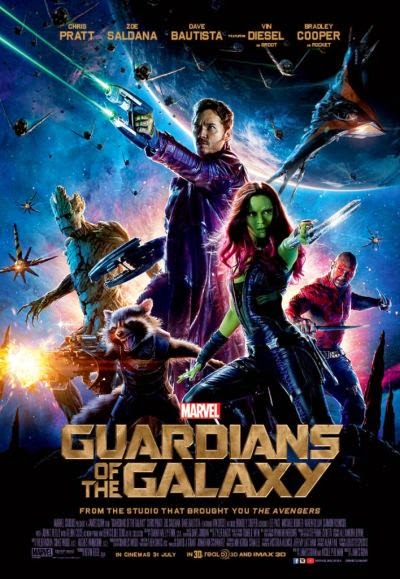 Guardians of the Galaxy takes off this week in cinemas nationwide, introducing a whole new cast of Marvel characters to its cinematic universe on a roller-coaster space adventure far from our primitive Terran shores.

From Marvel, the studio that brought you the global blockbuster franchises of Iron Man, Thor, Captain America and The Avengers, comes a new team--the Guardians of the Galaxy. An action-packed, epic space adventure, Marvel's "Guardians of the Galaxy," in theaters August 1, expands the Marvel Cinematic Universe into the cosmos, where brash adventurer Peter Quill finds himself the object of an unrelenting bounty hunt after stealing a mysterious orb coveted by Ronan, a powerful villain with ambitions that threaten the entire universe. To evade the ever-persistent Ronan, Quill is forced into an uneasy truce with a quartet of disparate misfits--Rocket, a gun-toting raccoon; Groot, a tree-like humanoid; the deadly and enigmatic Gamora; and the revenge-driven Drax the Destroyer. But when Quill discovers the true power of the orb and the menace it poses to the cosmos, he must do his best to rally his ragtag rivals for a last, desperate stand--with the galaxy's fate in the balance. 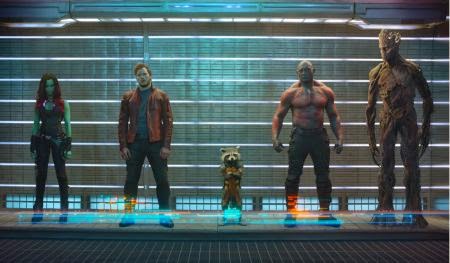 Guardians of the Galaxy is directed by James Gunn and starring as the so-called Guardians of the Galaxy Chris Pratt as Peter Quill, sci-fi diva Zoe Saldana as Gamora, WWE's Dave “The Animal” Bautista, and Bradley Cooper & Vin Diesel as the voices of Rocket raccoon & Groot respectively. Causing death and destruction to the galaxy are Lee Pace as Ronan the Accuser, Karen Gillan as Nebula and Djimon Hounsou as Korath. Rounding out other denizens of the galactic universe is Benicio Del Toro as the enigmatic Collector, Michael Rooker as Yondu and, surprisingly, veteran award-winning actress Glenn Close as Nova Prime. 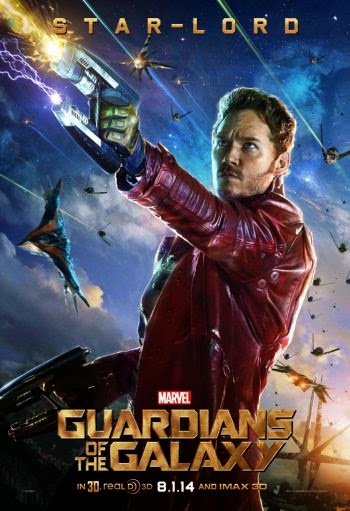 Meet Star-Lord... “Who?” The main protagonist of the movie, Peter Quill, was abducted from Earth in the 1980's and grew up amongst galactic riff-raff into present day's space rogue, the self-styled “legendary outlaw Star-Lord”. He may possibly be the new generation's Han Solo, the charming space scoundrel with heart. 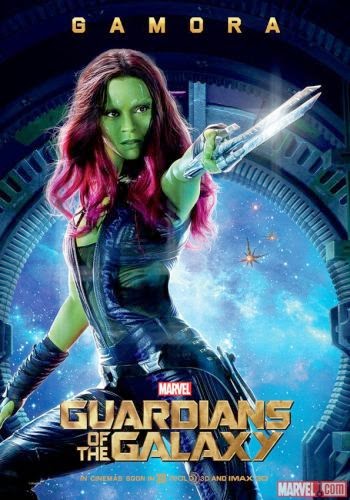 Gamora played by Zoe Saldana of Avatar & Star Trek renown is a green-skined female alien orphaned from young and then trained by intergalactic bad@$$ Thanos to be the perfect assassin for his evil schemes. 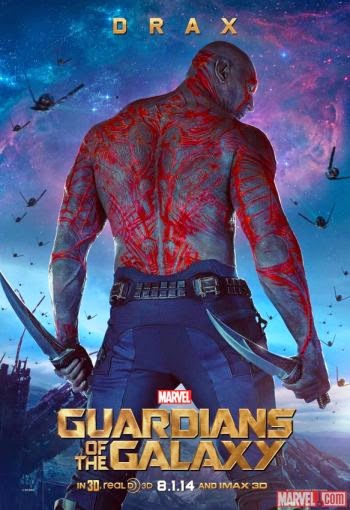 Played by WWE wrestler Dave Bautista, Drax the Destroyer is seeking payback from Ronan for slaughter of his family. Drax, or his alien race, is also very literal and has problems understanding Terran metaphors. 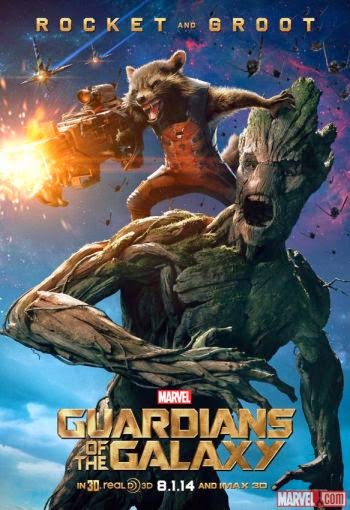 Rocket and Groot certainly round out the stranger Guardians, the former being a genetically enhanced fast-talking raccoon whilst the latter an intelligent humanoid tree, akin to Ents from Middle Earth but smaller. Rocket is voiced by Bradley Cooper whilst Vin Diesel records varied intonations of “I am Groot”. 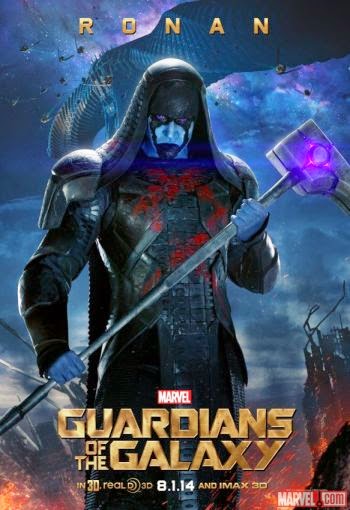 Ronan the Accuser is a blue-skinned Kree radical who wants to eradicate Xandar. In order to do so, he allies himself with mega-supervillain Thanos to retrieve an ancient artifact in exchange for destruction of Xandar. He commands an army from his 3 mile-long warship, the Dark Aster. 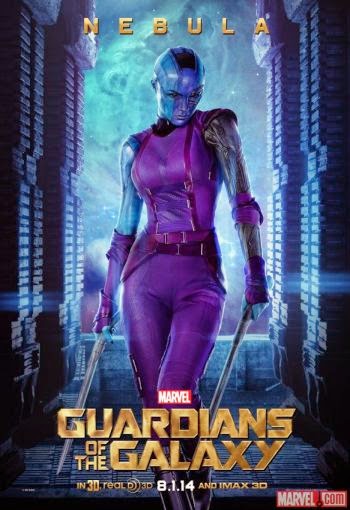 Thanos delegates his “daughters” Gamora and cyborg Nebula to assist Ronan in his mission. 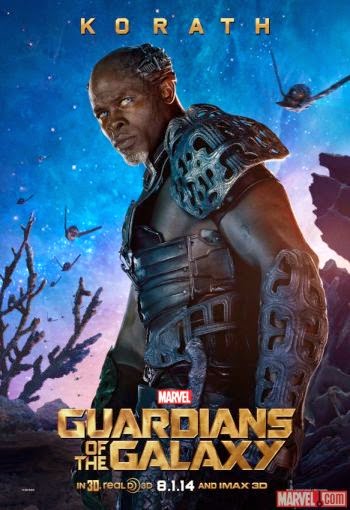 Also working for Ronan is Korath the Pursuer, a feared intergalactic Sakaaran hunter so has yet to hear of Star-Lord's reputation. 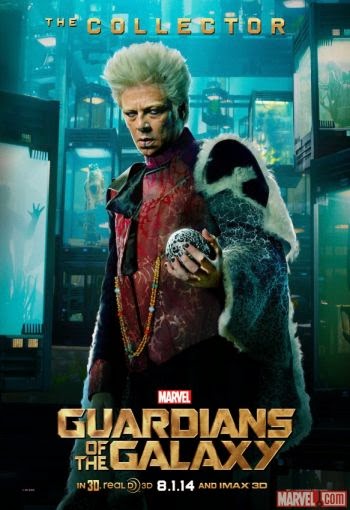 Taneleer Tivan, otherwise known as The Collector, deals in valuable items from across the cosmos and one of the Elders of the Universe. Marvel movie fans would recall him at the end credits of Thor: The Dark World when Lady Sif hands him the Aether for safekeeping. The Collector's museum is located at Knowhere. 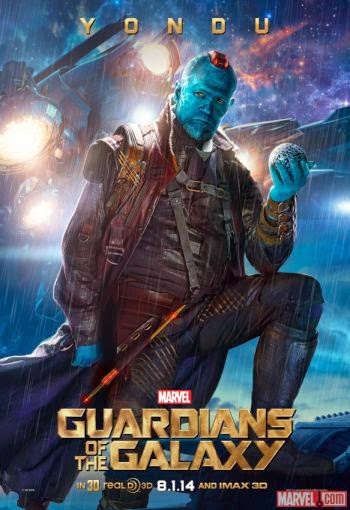 Yondu leads the Ravagers, an organisation of intergalactic pirates, thieves and smugglers. Peter Quill was trained by Yondu as a Ravager. The blue-skinned Centaurian wields a deadly whistle-controlled self-propelled arrow. 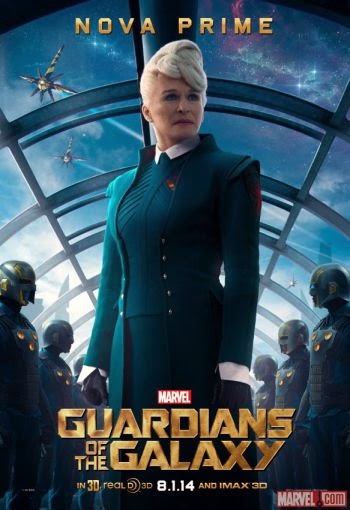 The Nova Corps is an intergalactic military / police force based on Xandar. They are led by Irani Rael, known as Nova Prime. She's not exactly thrilled at the prospect of having “the fate of twelve billion people in the hands of these criminals?”

Although the Guardians of the Galaxy spans the er, galaxy, much of the movie takes place on Morag, Xandar and Knowhere. Find out more from Galaxy Getaways and plan your next vacation is one of these exotic locales far, far away.


Here's some local cosplay at the recent Malaysian Premiere in TGV Sunway Pyramid: 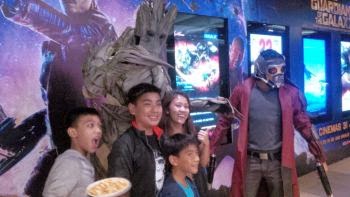 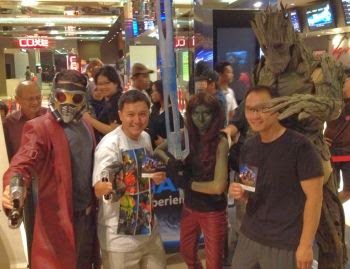 Reviews for Guardians of the Galaxy are overwhelming positive, rated 9 out of 10 by IMDB and 91% by RottenTomatoes. With so much good vibes, Marvel announced a sequel in 2017 during San Diego Comic-Con even before the movie released! Check out these reviews by CinemaOnline, the New York Times and The Verge. 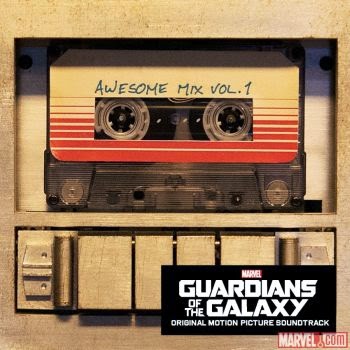 The soundtrack featuring pop music from the 1970s and 80's draws warm fuzzy feelings from more mature viewers yet blending well with the movie tone to resonate among the new generation audience. Blue Swede's Hooked on a Feeling used for the movie's early trailer certainly drew positive attention and set the retro yet modernised tone for the audience. “Ooga chaka, ooga ooga chaka!” Listen to Peter Quill's “Awesome Mix” below:

Guardians of the Galaxy is now showing nationwide. Avid movie goers looking for the most shiok experience may consider watching TGV's IMAX 3D priced from RM28 to RM32 per ticket, or GSC's Dolby Atmos D-box motion actuator seats for RM32 per ticket at 1 Utama. Read up for about D-Box here. In additional TGV is offering limited edition poster for purchasers of IMAX 3D tickets (while stocks last). 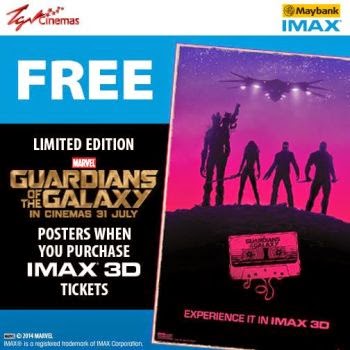 Now for Guardians of the Galaxy fans new and old who want to take home a piece of space adventure, the Outpost Movie Recon Team (M.R.T.) has once again surveyed the local shores for movie merchandise. This time around, the cinemas are not offering exclusive premiums or concession goodies, saving you some calories from popcorn and sugar drinks. Instead a variety of movie merchandise are available via contests & activities. 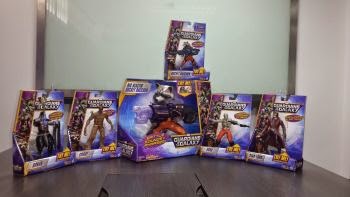 Firstly GSC Cinemas is giving away movie premiums via their “Meet The Guardians' Roadshow over the weekends of 2 & 3 and 9 & 10 August. Customers present 2 ticket stubs during the scheduled times for an instant lucky draw. There are also more prizes to be won from their website contest here. 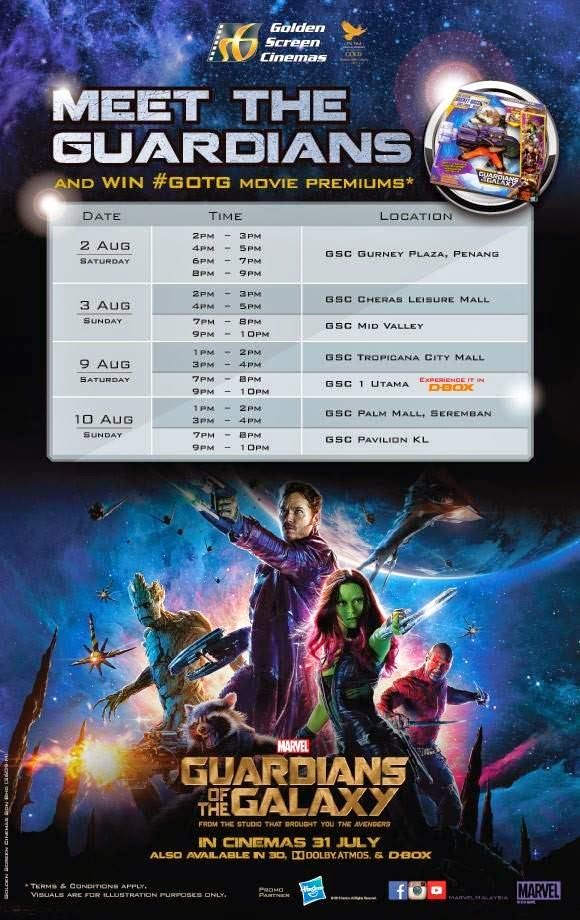 Motortrader has their online contest for movie merchandise ending soon on 4 August 2014 so enter fast here to win these goodies: 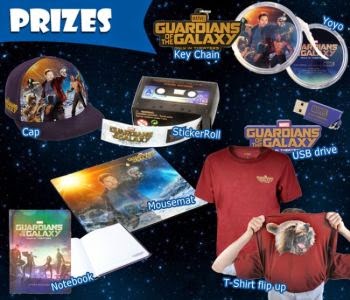 Meanwhile, the official Marvel Malaysia Facebook Page is running a “Where is Rocket Contest?” until 5 August offering similar movie merchandise. 3 photos of Rocket will be released for participants to identify the location with a witty caption. 2 winners will be chosen for each photo. Get the full contest details here then participate from this first photo. 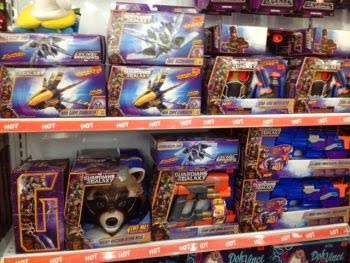 For mass market toy merchandise, Hasbro offers a wide range of products covering action figures, space vehicles, and role-play accessories. However unlike previous Marvel movie tie-ins, there is no 3.75in series of action figures. Instead there are smaller 2.5in figures sold in pairs to fit a variety of spaceships such as the Milano (though still not to scale). If the ships were produced to standard 3.75in scale they would have been huge and likely outside the desired price range.

The Marvel Legends 6in scale Infinite Series set of 6 figures features the team together with Iron Man fitted for space and Nova from the comics. Going the path of Built-A-Figure again means needing to collect all 6 figures for parts to built Groot. At RM75 per figure, that comes to RM450 for actually 7 figures to an average cost of RM64.28 per figure. Well the Guardians of the Galaxy do look rather swell together in the display above. 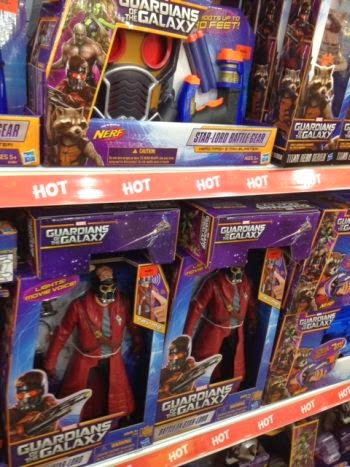 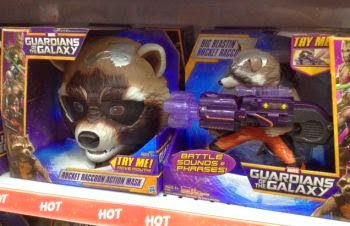 Kids (and adults) can also role-play as Star-Lord (who?) and Rocket Raccoon with masks and NERF blasters. Unfortunately Star-Lord's mask only fit kids, but the NERF blasters at RM99.90 are fine for the big boys and easily repainted to match the movie versions for cosplay. As for the Rocket mask, it features moving jaw and ears but doesn't cover the whole head so would be of limited use for cosplaying.

Check out more in-depth review of the various Hasbro toys from Mania.com.

LEGO has expanded their Marvel sets to include this movie versions for Guardians of the Galaxy; previously most sets were comic versions for X-Men and Captain America plus cartoon versions of Ultimate Spider-man. The biggest set 76021 is The Milano Spaceship Rescue at RM399.90 which includes Star-Lord, Drax & Gamora vs. Ronan and Sakaaran in Necrocraft. To complete your 5 heroes, get set 76020 Knowhere Escape Mission at RM249.90 for Rocket & Groot vs. Nebula supported by another Sakaaran. Lastly the Nova Corps fighter comes in set 76019 Starblaster Showdown for RM129.90 with another Sakaaran Necrocraft and Star-Lord flying. Get them from major toy stores or LEGO hobby stores at The Curve and Bangsar Village. Lucky LEGO fans to SDCC 2014 could also have gotten hold of exclusive Rocket's Warship and The Collector mini-fig. Check out details of these sets at Brickset.com.

Hey's there's even a LEGO version of the movie trailer!

High-end collectors should lock in their orders now for Hot Toys 1:6 scale figures. So far only visuals for Star-Lord, Groot and Rocket have been released but surely Hot Toys will complete the team with Gamora and Drax in due course. More photos available from Hot Toys official Facebook Page. 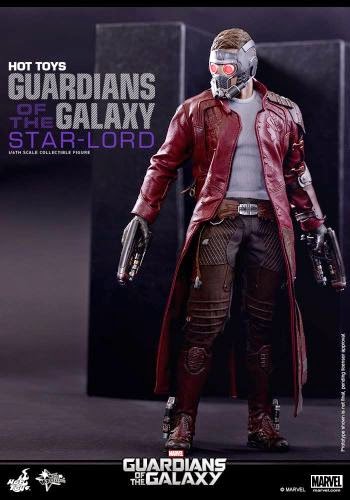 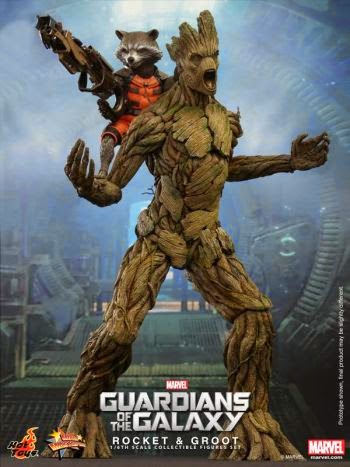 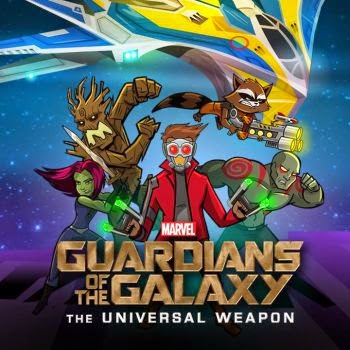 Digital gamers can download now the official Guardians of the Galaxy: The Universal Weapon App. iPhone & iPad users should quickly grab it this weekend via iTunes whilst on special promo price of only USD1.99. Follow the game's Facebook Page for updates.

For PC and console gaming platforms, there is Marvel Pinball themed for Guardians of the Galaxy. Head over to the official website for further details. 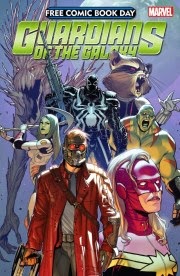 Of course comic book readers may want to read up on the source material. There's the whole 2008 to 2010 Guardians of the Galaxy series from Marvel digital comics available for 50% off at only USD0.99 per issue until 5 August 2014. Plus compilations, one-shots and FREE comics specially highlighted for GOTG fever here.

That's about all the Outpost M.R.T. have sourced for GOTG goodies available from our local shores (Earth, Malaysia). No doubt there's lots more cool stuff available overseas but we will leave that for hardcore fans to tackle via Ebay, online stores or other means.

Disclaimer: Guardians of the Galaxy and its trademarks are copyright to Marvel Entertainment, referenced here for fan service announcements without intent to infringe.