In the Name of the Moon, Sailor Moon magically debuts on Netflix worldwide! 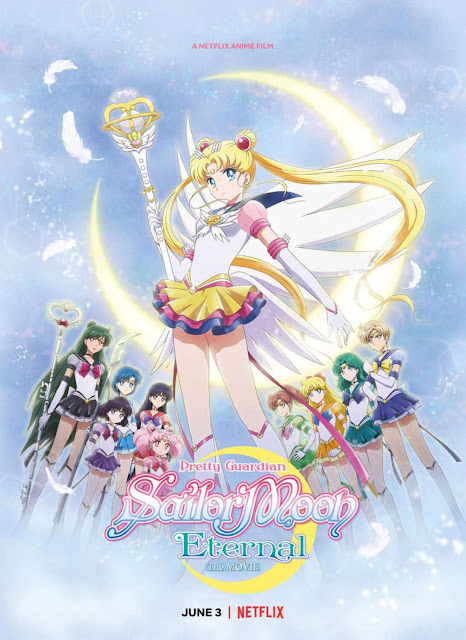 “Moon Prism Power, MAKE UP! ” Sailor Moon fans across the world, all hail the undisputed queen of magical princesses, as she makes her grand and stunning streaming debut into Netflix.

Sailor Moon Eternal The Movie Official Trailer from Netflix
Timing is just right to have a movie about fighting for hope, love and justice during Earth's darkest hour battling the COVID-19 pandemic. For most of us forced to stay home, the announcement of Sailor Moon Eternal: The Movie is not just a miracle but a reminder of hope, determination and that strength will prevail during challenging times.
For those unfamiliar with Sailor Moon, it is a global hit media franchise based on the manga written by Naoko Takeuchi. The franchise spawned a business empire of licensing and merchandising spanning from toys, cafes, musicals, live action drama series, make up, jewellery line, feminine products and heck, you can even get a Sailor Moon themed marriage registration form in Japan!
After many months of waiting, Sailor Moon Eternal: The Movie is making its grand debut outside of Japan on Netflix. Set to release on June the 3rd, Sailor Moon Eternal: The Movie is the continuation of Season 4 from the Sailor Moon Crystal animated TV series released in 2014.  In Japan, the film is known as Bishoujo Senshi Sailor Moon Eternal and is a 2 part theatrical release. Due to the global pandemic of 2020, Part 1's release in Japan was postponed from September 11 2020 to January the 8th 2021. Part 2 was released on the following month on February 11, 2021.
The first official teaser unveiled to the Japanese audience.
Moonies or ardent Sailor Moon fans will tear up in the first 5 seconds of the teaser.
I know because I did.
Source: 東映映画チャンネル
Part 1 of the Japanese Sailor Moon Eternal The Movie trailer
Source: Sailormoon-official
Part 2 of the Japanese Sailor Moon Eternal The Movie trailer.
For fans, stay till the end for a special fan service!
Source: Sailormoon-official
The good news is, international fans and viewers outside of Japan get to see both parts released on Netflix worldwide on June the 3rd.
Here is a quick rundown about the upcoming Sailor Moon Eternal movie.
For those who follow the Sailor Moon Crystal series, the story continues from a cliffhanger at the end of Season 3 when Usagi and Chibi Usagi hears a mysterious sound of a bell. The film will be a stunning rendition and retelling of the fourth story arc or Dream arc from the original Sailor Moon manga series written by Naoko Takeuchi.
Plot
It is April, the beginning of spring. The Sailor Scouts are celebrating their entrance into Jyuban high school when a mysterious pegasus came to Chibi Usa for help. Things become stranger when a sudden eclipse brought the arrival of the Dead Moon Circus troop which sets foot in Azabu Juban town where Usagi and her friends lives. The townsfolk are enthralled by the circus in town which unbeknownst to them is led by the evil Queen Nehelenia who is out to conquer Earth. It is up to Sailor Moon and the Sailor Scouts to put a stop to her nefarious plans.
Returning creative staff includes Chiaki Kon who directed Season 3 of Sailor Moon Crystal and Kazuko Tadano who handled the character design for the original 90s anime series.
Kotono Mitsuishi is the voice of Sailor Moon since the first anime series was released in the 1990s.
Japanese Dub Voice Talents
Source: Moonsticks
Convention panel with the English dub voice talents for the upcoming Sailor Moon Eternal Movie at Anime NYC 2017
Source: Vizmedia
English Dub Voice Talents
Source: Comicbook.com
So for viewers who are new to Sailor Moon, will it be worth adding Eternal to your must-watch list?  Well, I have taken the liberty to include a little bit of trivia to help you gain more context and hopefully pique your curiosity to give Eternal a shot.  I will use visual references from the 90s Sailor Moon since I personally grew up with the series during that era. 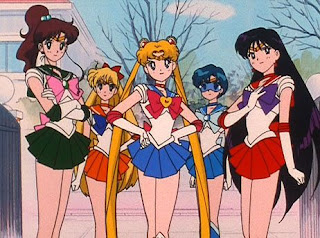 Source: Naoko Takeuchi, Nakayoshi
Sailor Moon or Bishoujo Senshi Sailor Moon is a manga series created by Naoko Takeuchi. The animated series is produced by Toei Animation and ran from 1991 – 1997 with 200 episodes.  Back in the late 90s, I remembered fondly sitting in front of the television set, religiously watching Sailor Moon the series on schedule on the now-defunct TV channel, Metro Vision (now known as Didik TV).
It was dubbed in Cantonese for the Malaysian audience (except for the opening and ending credits which retained the original Japanese songs) but it was by all means a decent dub and minimal compromise in overall quality. The humour, gags and jokes were intact and just as enjoyable.
The main plot revolves around Usagi Tsukino whose alter ego is Sailor Moon and her Sailor Scout friends who work together to protect and defend Earth from being attacked by various outlandish enemies that pop up in every episode.
Fast-forward to 2014, a new reboot version of the anime was created to commemorate the 20th anniversary of the original 90s series. Known as the Sailor Moon Crystal series, it follows the story arcs from the manga much more closely. The upcoming Sailor Moon Eternal film continues from Season 3 into the fourth arc of the series.
The Characters
Usage Tsukino / Sailor Moon 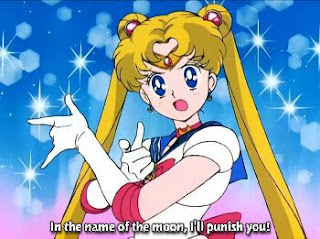 Our plucky heroine is none other than the ordinary and very average junior high school girl named Usagi Tsukino. She is also known as Serena in the North American dub. Her name is roughly translated as Rabbit on the Moon based on the Japanese folklore of a rabbit living on the moon pounding rice cakes. With the help of Luna, a talking cat, she discovered that she is the warrior Sailor Moon whose mission is to find a crystal and protect the princess of the moon.
One would describe Usagi as a glaringly flawed hero. As a normal school student, she hates math, is inept in sports, clumsy, lazy and perpetually late for school. Her friends even expressed disbelief that she was able to pass the entrance examination into high school. In spite of her flaws, she is fun-loving and an active member of the school's manga club. She is pure-hearted and puts friendship and love above anything else. Her dream is to be a bride. But of course, doesn't every young girl? Flaws aside, Usagi does eventually grow more mature in the series. 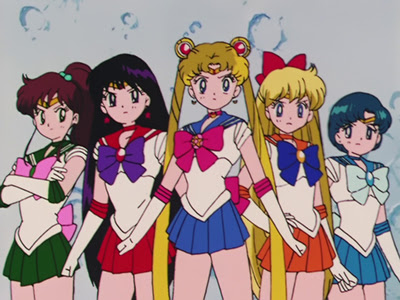 The Sailor Scouts
The Sailor Scouts are Usagi's closest friends who fought alongside her as well as protect her. They comprised of the four inner plants Mercury, Venus, Mars and Jupiter. They all played the role of guardians in protecting Sailor Moon who is later revealed as the reincarnation of Princess Serenity and the future Neo Queen Serenity of Crystal Tokyo in the 30th century.  Each has their own unique power and an element that corresponds to their planet. Water for Mercury, Fire for Mars, lightning for Jupiter and er... love for Venus. Like normal school girls, they hang out, shop and talk about boys with the exception of Ami Mizuno (obviously the brains of the team) who constantly nags her friends to study. Later in the series, the outer planets that comprise of Sailor Pluto,  Sailor Uranus and Sailor Saturn will join the group.
Chibiusa / Sailor Chibi Moon
Sailor Chibi Moon is Sailor Moon's daughter with Mamoru Chiba from the future who first appeared in the second story arc of the manga. She is a spoilt and precocious brat girl who gradually gained more confidence in herself and her Sailor abilities.  She gets along well with the rest of the Sailor Scouts but constantly bicker with Usagi especially over their jealous rivalry for Mamoru. She lives with Usagi and shares a dysfunctional sisterly relationship with her. Her goal is to be a beautiful lady and deeply admires Usagi for her beauty.
Mamoru Chiba / Tuxedo Mask
Mamoru Chiba is Usagi's boyfriend and future husband although he enjoys teasing her during their early encounters. His alter ego is Tuxedo Mask and later revealed to be the reincarnation of Prince Endymion and the future King Endymion of Crystal Tokyo of the 30th Century. He is the most mature in the group and the object of affection for both Usagi and Chibiusa.  Although at first glance, he appears to be the token male character of an all-female cast, his roles in the story are just as prominent since he gets captured and brainwashed a lot throughout the series.
Fighting evil by moonlight, winning love by daylight.
.
What made Sailor Moon a mass universal appeal in both Japan and the West is that it featured ordinary girls with stereotypical "girly" interests like fashion, boys, and shopping. Yes, you can be a bad guys butt-kicking superhero and still shamelessly obsess over which lipstick shade matches your shoes to help catch your crush's eye. In the Sailor Moon manga and anime of the 90s, there are mini-stories that dive into the daily teenage lives the girls lead.
The girls, by all means, are not perfect and have common fears, worries, and anxieties that any regular teenager undergoes i.e. exam anxiety, fear of the dentist, or yearning to be popular in school.
At the core of it, Sailor Moon herself is a relatable character to ordinary people like us who want to make a difference in a big way but hampered by our flaws. Rather than letting her flaws stop her,  Sailor Moon is not ashamed of them.
Final Say
I do not think it is necessary to binge all 3 seasons of Sailor Moon Crystal in order to appreciate the movie. It makes perfect sense why the producers chose this particular arc to be in film format instead of a 13 episode series. Since it is a brand new arc with new villains and characters, it can be enjoyed as a standalone movie without the need to reference the previous seasons' episodes. Other than perhaps background on Chibi Usagi coming from the future or origins of the outer Sailor Scouts but really IMHO it doesn't matter.
The Dream arc is also by far, one of my favorite story arcs in the manga with new characters and a good balance of lighthearted and dark moments. So if you are new to the franchise this may as well be THE gateway to explore the richer worlds of Sailor Moon and the characters.  Underneath all the glitter, sparkles and ribbons is a deep story that explores themes of romance, tragedy, reincarnation, space, and time travel.
I highly recommend you to spend the rest of your days at home reading the manga or if the stylized illustrations are not your cup of tea, then you can always opt for the Sailor Moon Crystal series which is as faithful as it gets to the original plot.
Bonus trivia!

Merchandise
Official figurines of Sailor Moon and friends from Eternal movie are now available in Malaysia. Produced by Bandai Banpresto, there are pretty figures of Sailor Moon herself as well as cutesy chibi versions of the Sailor Scouts under the  Q Posket line. Order them now from Big Boys Cave for the best prices and Free Shippping.