10 years of Assembling Marvel Superheroes to battle Thanos in Avengers 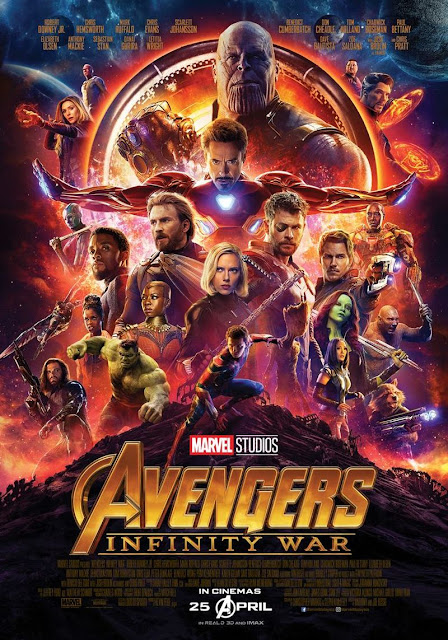 Just over a decade ago, the Marvel Cinematic Universe (MCU) was launched with the release of Iron Man. It was Marvel Studios first direct foray into film production using what was perceived at that time a second-tier comic book superhero; the first-tier titles like Spider-man and X-men were  licensed out to other film studios. Financed as a blockbuster movie with a budget of USD140 million (almost RM550 million), Iron Man in 2008 would either make or break the new studio. As history would tell, Iron Man won over the cinema audience across the world, in no small part owing to Robert Downey Jr's portrayal of genius billionaire playboy philanthropist Tony Stark. Watch to this featurette where Marvel Studios President Kevin Feige, Director Joe Russo, and the stars of the MCU reflect on their 10-years of the MCU:


After eighteen movies in three phases setting up this shared universe of superheroes, everything (and everyone) comes together in Avengers Infinity War opening in Malaysian cinemas today. Directed by Anthony & Joe Russo (Captain America: Winter Soldier and Civil War), Avenger Infinity War looks to be the ultimate superhero team-up movie against a supervillain so powerful that no single hero, or even a team of heroes like the Avengers, could hope to challenge.

As the Avengers and their allies have continued to protect the world from threats too large for any one hero to handle, a new danger has emerged from the cosmic shadows: Thanos. A despot of intergalactic infamy, his goal is to collect all six Infinity Stones, artifacts of unimaginable power, and use them to inflict his twisted will on all of reality. Everything the Avengers have fought for has led up to this moment - the fate of Earth and existence itself has never been more uncertain.

Featuring an all-star cast (which probably cost half the movie's purportedly USD300 million / RM1.173 billion!), our attempt at a headcount racked almost forty Marvel characters, of which around thirty-five have previously featured in at least one of the preceding movies. Here is our attempt at the featured cast list grouped according to "factions" of some relevance:

Plus Peter Dinklage in undisclosed role.

Surely it would be a monumental challenge to fit all these characters together in the same scene, so we expect much of the movie to comprise grouping of our heroes on separate adventures to stop Thanos. For anyone who has watched the movie trailers and many promos, it would be non-spoilery to expect the following team-ups hinted by these exclusive posters from Odeon Cinemas of UK:


A decade of movies is way to much to recap, so let's just simplify to major events of the Avengers relevant to Infinity War as summarised by the Marvel Cinematic Universe Wiki:

The Avengers, also known as the Heroes of New York, were a team of extraordinary individuals, either with superpowers or other special characteristics. Its purpose is to protect world stability from inner or extraterrestrial threats, and to work with the peaceful interests of the whole world rather than a specific country or organization. The Avengers were first assembled by S.H.I.E.L.D. when Loki invaded Earth with his Chitauri army to conquer the planet. The team defeated him and went to their separate ways.

After S.H.I.E.L.D. became a defunct agency, Stark Industries remodeled Stark Tower into Avengers Tower and the team joined the fight against HYDRA. After they finished the war, Tony Stark built Ultron hoping that the AI would be able to defend the world from any threats necessary. The plan backfired and Ultron started a war against humanity, ending with Ultron's defeat. When Ultron was defeated, the team gained new recruits and relocated to the New Avengers Facility.

Under Captain America's leadership, the team successfully completed some missions, though the collateral damage caused during their conflicts made the United Nations pass a document, known as the Sokovia Accords, to regulate their actions. The different opinions regarding this oversight made the Avengers disband as a team, and it split into two different factions, with its members and other heroes gathering around Iron Man and Captain America, respectively. After Captain America stopped Helmut Zemo, the instigator of their fight, the team disbanded.

The major binding element between many of the MCU movies has been the Infinity Stones, featuring since the Captain America: The First Avenger (2001). So before stepping in the Infinity War, it is worthwhile relook into what are these powerful artifacts. As explained by Taneleer Tivan, The Collector in Guardians of the Galaxy (2014), "Before creation itself, there were six singularities. Then the universe exploded into existence, and the remnants of these systems were forged into concentrated ingots... Infinity Stones."

Here's our intel on the six Infinity Stones:

Space (blue): During World War 2, the Tesseract was obtained by the Red Skull used its unlimited energy as a power source for Hydra weapons. When Captain America defeated Red Skull, the Tesseract was retrieved by Howard Stark and kept by SHIELD. In 2012 it was used by Loki to allow the Chitauri invasion but was repelled by the Avengers. The Tesseract has since be stored in the Asgard Vault until destruction of this world from the events of Ragnarok.

Mind (yellow): Formerly part of Loki's Spectre used in the Chitauri invasion, it was kept by SHIELD until it's collapse fell into the hands of Hydra. In addition to mind control, it granted super powers to the Maximoff twins, Pietro and Wanda, during experiments by Hydra. Ultron obtained the stone intended for its nefarious rebirth but was thwarted by the Avengers leading to the creation of the andriod Vision. It now resides on Vision's forehead.

Reality (red): As the Aether, the dark elf Malekith attempted to use its reality bending powers to bring the Nine Realms into darkness. Foiled by Thor, the Aether has since been handed to The Collector by the Asgardians for safekeeping.

Power (purple): Sought by the Ronan the Accuser on behalf of Thanos, the Power stone grants its user the destructive power to obliterate planets. Ronan was stopped by the combined resilence of the Guardians of the Galaxy using the stone to obliterate him. The stone is present safeguarded by the Nova Corps on Xander.

Alright so now that we are all up to speed with the MCU, let's get going to Avengers Infinity War! And remember this is a Marvel movie so stay back for post-credit scene(s); at least one confirmed so far.

Leading up to this movie release, Marvelites in Southeast-Asia were treated to a special Avengers Infinity War Red Carpet event at Marina Bay Sands Singapore attended by stars of the MCU: Robert Downey Jr. (Tony Stark / Iron Man), Benedict Cumberbatch (Dr. Stephen Strange), and Karen Gillan (Nebula). Also present were Director Joe Russo and Executive Producer Trinh Tran, offering autographs and selfies with some of the most ardent fans of the region. Watch this video of the highlights from this special event on 16 April 2018:


Thanks to Petron Malaysia, the largest contingent of fans outside Singapore were sixty Malaysians selected from an online contest. Our Commander was lucky to be chosen for this roadtrip and provided coverage from ground zero at the red carpet fan box:

Whilst the Avengers themselves are not coming to our local shores, it does seem that Earth's Mightiest Heroes might have setup a branch in Menara TM, Kuala Lumpur.

Our intel did not find any shopping mall concourse events promoting Avengers Infinity War, although retail product promos are plenty. For a bit of local thrill, the iconic Petronas Twin Towers at KLCC is having thematic Avengers light show projections onto its shopping mall walls every night until 29 April 2018 at 8.15pm, 8.45pm, 9.15pm and 9.45pm.


As a special treat for Marvel fans, TGV Cinemas is conducting their Heroes Homecoming Fan Party on Saturday 28 April from 6pm to 8pm simultaneously at four of their cineplexes across the country: Sunway Velocity in Kuala Lumpur, Bukit Indah in Johor Bahru, Gurney Paragon in Penang, and Vivacity Megamall in Kuching. 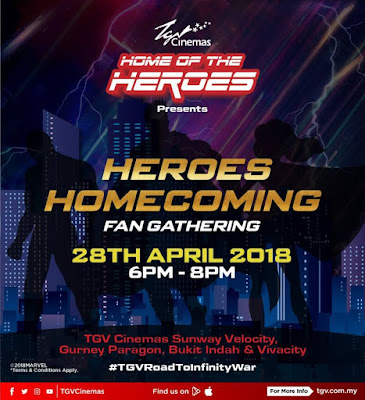 The event is FREE to attend with goodies bags offered to the first 100 fans to register on-site. Follow what's happening on TGV's Facebook Page and Event Listing for Heroes Homecoming. 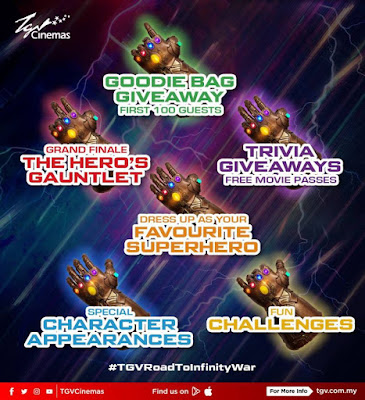 Reviews are out for Avengers Infinity War though whatever they say good or bad it does not matter... fans will still flock to see the movie! The movie scored 10 out of 10 in review by Star2.com. For those curious about the comic book origins of the Infinity War (or need a brief recap for older fans), Star2.com also has a handy article about the first appearances of Thanos upto the Infinity Gauntlet mini-series event in the early-1990s.


So as the legendary Stan Lee would say...

Disclaimer: Avengers and associated trademarks are copyright to Marvel Entertainment, referenced here for fan service purposes only without intent to infringe.
Posted by Outpost Productions No comments: