Time to Upgrade The Predator 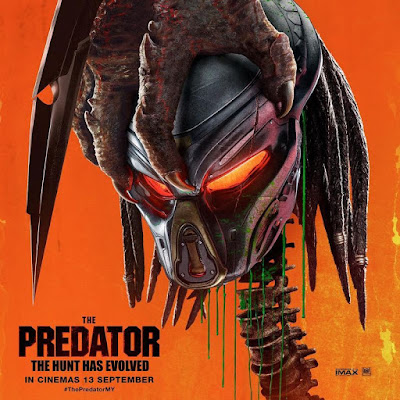 In 1987 the first Predator movie was released and spawned a scifi cult following spanning over 3 decades until today. The franchise comprise three movies with the fourth releasing next week in Malaysia on 13 September 2018. It also had two crossover AVP movies with the Alien franchise, another cult scifi series of that era. The Predator saga is further supplemented in other media by countless comic books, memorabilia, and video games forming a fairly expansive lore. Our geek intel here will recap on a few good-to-know facts about Predator to set context for this year's latest movie outing.

Predators are an extraterrestrial, i.e. alien, species of intelligent bipedals larger and much stronger than the average human. Whilst this alien species has not been named in films, lore from the expanded universe also refers to them as Yautja or Hish-Qu-Ten. An ancient and advanced civilisation, Predators travel the galaxy on their spaceships in search of other dangerous lifeforms to hunt for sport. Worthy prey defeated by Predators are skinned and/or decapitated with the skull & spine taken as trophies.

Like human, each Predator is unique with individual personalities and motivations. There are even sub-species (more about that later). Most Predators hunt separately, although occasionally deploying in small teams up. Their culture seems to dictate a similar assortment of gear and weapons on the hunt, such as bio-helmets, spear, wrist blades and shoulder mounted plasma casters. Their natural vision lies towards infrared spectrum, thereby able detect body heat from prey. Their advance tech also allows them to camouflage with the environment, becoming almost imperceptible to human eyes except for light distortion over its form. See this infographic below for more details on Yautja gadgets (source: geektyrant.com). 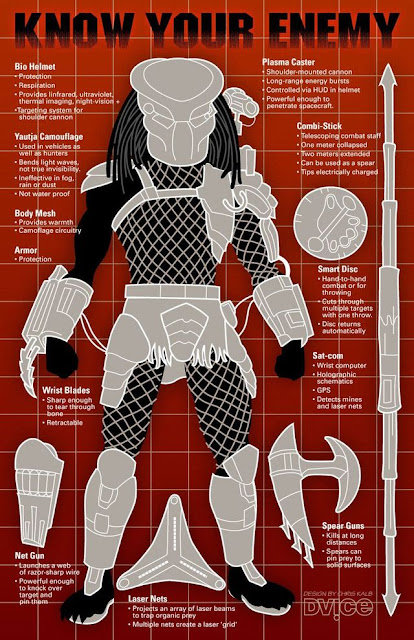 The first Predator movie released  in 1987 starred then action hero Arnold Schwarzenegger in the lead role of Major Alan "Dutch" Schaefer. Dutch together with Dillon, Mac, Billy, Blain, Poncho, and Hawkins form an elite special forces unit sent into the jungles of Central America on a rescue mission. 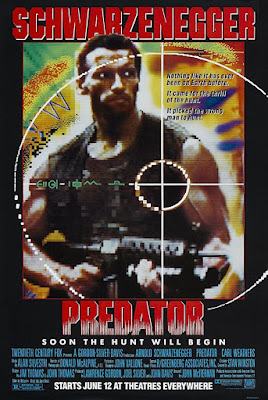 After overwhelming a camp to insurgents, the team proceeds to their extraction point with a guerilla captive, Anna. The team soon realise that they being stalked after Blain and Hawkins are killed by something with green luminescent blood. They set a traps around their camp site but fail to snare their stalker. In the process most of the team are slain except for Dutch and Anna.

The 30th Anniversary Trailer for Predator (1987) back in overseas cinemas last year for fan service.

Our hero then sends Anna away to confront the Jungle Predator one-on-one. The prey eventually outsmarts the hunter, trapping the injured Predator. Beaten by a worthy opponent, it activates a self-destruct and consumes the surrounding jungle in a massive explosion. That, of course, isn't enough to kill the future Governator and Dutch escape in the nick of time to the extraction point.

Oh and by the way, Hawkins as the first spec forces member to be killed is played by Shane Black, now Director of the upcoming movie! 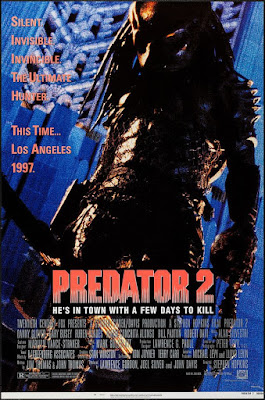 Predator 2 was released 3 years later, this time with a new City Hunter based on Los Angeles of then near-future 1997. Arnie declined to return bringing Danny Glover into the lead role as veteran LA police department officer Lieutenant Michael "Mike" R. Harrigan. Casualties quickly mount amid a gang war between drug cartels as the Predator seeks a worthy adversary.

Now apparently Dutch's adventurers in Central America ten years back (in movie timeline) did not go unnoticed by the CIA where an Other Worldly Life Forms Program (OWLF) has been established to investigate Predator-related sightings. Led by Special Agent Keyes, OWLF sets a trap to capture the Predator but is outmaneuvered by the crafty alien with most of his team slaughtered. However Harrigan manages to severely wound the Predator by severing its forearm.

Harrigan tracks down the Predator to its spaceship and both dance the final duel. The City Hunter is narrow defeated by Harrigan using its own throwing disc to slice open its guts. In a final epic scene, a clan of Predators uncloak before Harrigan to retrieve their fallen comrade. As a sign of respect to Harrigan as a worthy warrior, the Elder Predator tosses him a vintage pistol from Earth 1715, hinting that the Yautja have been hunting mankind for centuries.

Predator 2's box office performance in 1990 was underwhelming and the franchise took a long break until revived in 2004 with Alien Versus Predator (AVP) directed by Paul W.S. Andersen (now of Resident Evil fame). Reviews were mixed with some fans feeling the Predators on their rite of passage were not sufficiently bad@$$ to warrant a fair smackdown with the Xenomorphs. Anyway, the movie made enough money for a sequel Aliens vs. Predator: Requiem (AVPR) in 2007. Reviews were mostly gruesomely negative as the increased level of gore with the movie nominated for Golden Raspberry awards in the fields of Worst Excuse for a Horror Movie and Worst Prequel or Sequel. AVPR did not win.

Come 2010, the third installment of the franchise and the fifth movie featuring the Yautja was released as Predators. Importing nothing from previous installments, the action now takes place on another planet where the most lethal killers of mankind are dumped to be prey. Taking the lead this time is Adrien Brody as Royce, a former U.S. Army Special Forces soldier turned mercenary. 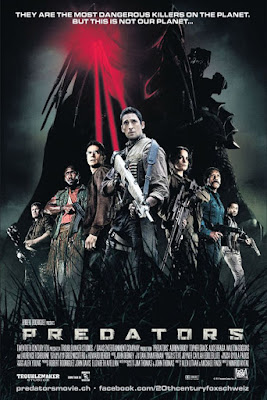 In line with the title of this sequel, Predators features not one but three new extraterrestrial hunters. Furthermore they are a larger sub-species dubbed Super-Predators and identified individually as Tracker, Falconer and Berserker. Furthermore there appears to be a feud between the Supers and Classic Predators, of which one had been captured.

After the obligatory gruesome deaths of the hapless humans and two Super-Predators, Royce attempts to work with the captive Predator to escape the game reserve planet. Plans go awry as the remaining Berserker defeats the Classic Predator and destroys the spaceship before Royce could escape. In an epic one-on-one duel of man versus Predator akin to the original movie, Royce cleaves apart the Berserker and plots another way off the planet when new prey arrives.

One would think Predators should know better by now to leave humans alone, but... say hello next week to The Predator. 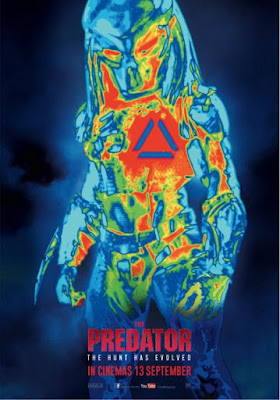 From the outer reaches of space to the small-town streets of suburbia, the hunt comes home. Now, the universe's most lethal hunters are stronger, smarter and deadlier than ever before, having genetically upgraded themselves with DNA from other species. When a young boy accidentally triggers their return to Earth, only a ragtag crew of ex-soldiers and a disgruntled science teacher can prevent the end of the human race.


The trailer pretty much sums out what to expect from The Predator, including a new “Ultimate Predator”. According to Director Shane Back, this new breed of Predator is more correctly referred to as the Upgrade. What this Predator has done is splice DNA from creatures they have hunted to grant superior traits and abilities. The Upgrade towers 10 feet tall and looks to have hardened skin such that it does not need to wear armour often used by the classic Predators. Abilities other than the standard Predator fit-out should be expected.

Also clearly present in the trailers is a classic Predator dubbed the Fugitive. No secret from the trailers, the Fugitive Predator seems to (finally) be captured by a human organisation that looks to be researching the creature and its technology. Tapping into the world established in Predator 2, this movie introduces the character of Sean Keyes (Jake Busey), the son of Peter Keyes from OWLF. Busey is in fact the real life son of Gary Busey who played Special Agent Keyes. Will this younger Keyes follow in his father's footsteps?

Leading the ragtag band of ex-soldiers this time is Quinn McKenna (Boyd Holbrook), a former U.S. Army Ranger who's son Rory (Jacob Tremblay) accidentally brings down the Predators to a small town. Among a testosterone-filled posse is school teacher Casey Bracket (Olivia Munn). Expect lots of bloody deaths so put your bets on who will survive this latest Predator outing.


Here in Malaysia, “Predators” have been sighted recently at AEON shopping malls. But not to worry they are quite “friendly”... just ask nicely for selfies! 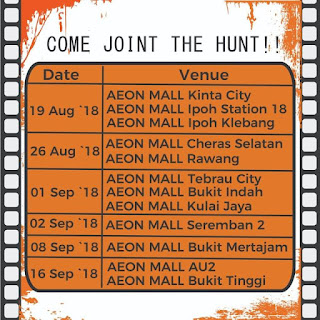 Catch them at these malls and check the respective Facebook Pages of each mall for appearance timing.

Merdeka Special | Meet our Wayang Kulit Predator
To celebrate Malaysia's 61 years of Independence, we have hunted down local Malaysians with unique talents up their sleeves! Meet the talented team at Fusion Wayang Kulit! Fueled with a passion to revive the wayang kulit scene, they infuse popular culture into the making of their wayang kulit characters. Check out how they came up with a Predator-inspired character! #SayangiMalaysiaKu2018 #ThePredatorMY
Posted by 20th Century Fox on Thursday, 30 August 2018

Noting that Yautja prefer hot and humid climates to hunt, our Malaysian tropical weather do seem ideal for Predator vacations. So indeed here's our very own Malaysian Predator:

Merdeka Special | Meet The Malaysian Predator
Keeping up with the #SayangiMalaysiaKu pride, let's continue to celebrate patriotism with THE PREDATOR twist. We hunted down a true Predator Fan, Cikgu Ayie www.facebook.com/PreBrushArt with a passion on creating the most realistic Predator costume. Ugaiz have to check this out! #ThePredatorMY
Posted by 20th Century Fox on Thursday, 6 September 2018


Hardcore fan Cikgu Ayie spent years developing his Predator costume to be movie accurate and certainly makes a memorable presence when appearance at the local cosplay scene. Find him on Facebook as Pre brush Art.

Malaysia's Movie Premiere for The Predator took place on 12 September 2018 at TGV Sunway Pyramid and thanks to 20th Century Fox, we could invite local Yautja clan members to join the Fan Screening that night.

Some action before the movie screening as Samurai and Berserker Predators battle a trio of human soldiers.


[CONTEST CLOSED - THANK YOU FOR PARTICIPATING]
Thanks for 20th Century Fox, we have five (5) pairs of invites to an exclusive Fan Screening of The Predator on Wednesday 12 September, 9pm at TGV Sunway Pyramid. Follow the steps below for the chance to win:
1. React (Like, Love, Wow, etc.) to this post on our Facebook Page.
2. Share the same post onto your Timeline, setting privacy to Public.
3. Comment in the same post on "why you are the BIGGEST Predator fan in Malaysia" within 100 words (photos permitted).

Make sure your entries reach us by Sunday 9 September, 11.59pm.

TERMS & CONDITIONS FOR PARTICIPATION
1. Participation only for residents in Malaysia ages 18 years & above able to attend the Fan Screening. If you are unable to attend please do not participate and potential derive a fan of the opportunity.
2. Only 1 entry per person. Multiple entries will forfeit all entries.
3. Selection of winners will be based on most creative submissions in Comments.
4. Contest closes on Sunday 9 September 2018, 11.59pm. Submissions thereafter will not be eligible.
5. Winners will be contacted via Message by or before Tuesday 11 September 2018. It is the contest participants' own responsibility to lookout for the said Message and respond accordingly to the redemption instructions given.
6. Invites / tickets to be collected in person at the cinema foyer of TGV Sunway Pyramid from 8pm onwards. Winnings are forfeit if not collected by 9.00pm.
7. This promotion is in no way sponsored, endorsed or administered by or associated with Facebook.
8. We reserve the right to revise these terms and conditions at any time without prior notice. 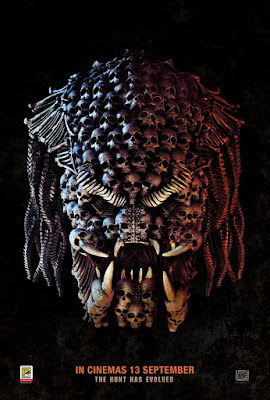 The Predator opens in cinemas nationwide on 13 September.
#ThePredatorMY
#OutpostGiveaway