After being besieged by never ending delays, the live action MULAN is finally making its way to the big screen. 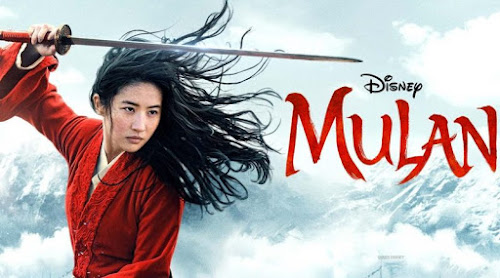 That is for countries without access to the Disney+ streaming platform. On the 4th September, Malaysians are fortunate to be able to watch Mulan in cinemas. For other parts of the world with Disney+, Mulan will be available to subscribers for an additional charge of USD30 / RM124. But if subscribers are willing to wait, the movie will be available for free on the streaming platform on 4th December this year... whew! As complicated as that sounds, the production of Mulan itself has been a battlefield with obstacles ranging from production to its shifting release date amidst political drama and to top it off the current Covid-19 pandemic.

Who is Disney's Mulan?
It is a well-known fact that the Disney Princesses are gems to the Disney universe. They represented strength, courage, determination and other qualities for a little girl's ideal role model. However this was not the case in the 1950s. The princesses were portrayed in a more stereotypical light who played damsel-in-distress type of roles. But the age of the Disney Renaissance saw the studio introducing stronger female leads that better reflect the beliefs and attitudes of women in modern times. This includes characters like Belle, Pocahontas and Ariel. However, the one that truly broke grounds for Disney was not a girl of royal descent who gets a romantic conclusion for her heroic efforts. Instead she is from Asian descent who went against the social norms at the time to save her country and bring honour to her family. That heroine is none other than Hua Mulan.

Based on the Chinese 360 word poem called the Ballad of Mulan, Mulan the animation was released in 1998 to cinemas worldwide. Unlike other Disney animated films, Mulan explores themes about loyalty to one's country, filial piety and upholding the family honour.

The legend originated back in the 5th - 6th century China and is a familiar household name to the chinese people just as Joan of Arc is in France. She is a beloved and heroic figure whose story has been adapted in many dramas, plays and movies in the east. The plot is about Mulan who sits worrying at her loom, when she learned that one male from each family is called to serve in the army to defend the country from invaders. With her father old and weak and her younger brother still a child, Mulan decides to take her father's place in the army.

The uniquely oriental flavour of Mulan captivated the western audiences and the movie went on the become one of Disney's critically acclaimed hits. Mulan the animation was a commercial success that garnered the Golden Globe and Oscar nomination grossing more than USD$475 million / RM1.97 billion worldwide. Though its success is also due to the original story being heavily tailored to the Disney formula. Mulan bombed in cinemas in China who found their beloved lady warrior too Disneyfied for their tastes.

So this comes with no surprise to why the studio's remake of a live-action Mulan will be significantly different from the 1998 animated film to honour the original version for the eastern audience.
Mulan's popularity in the west is further sealed when she is officially recognized as the 8th Disney princess. She is the first non-white, east Asian princess and not of royal lineage.
In order to court the chinese market, Disney is pulling out all stops by pumping in a generous budget of USD200 / RM829 million making Mulan the most costly Disney film to produce. Unlike the previous life actions like Aladdin, Lion King and Beauty and the Beast, the movie is stripped of cute animal sidekicks, musical numbers, and other Disney formulaic elements. Instead, we are getting a large-scale epic war story with breathtaking landscapes, beautifully choreographed martial arts and most importantly, an all Asian cast comprising of renowned veteran stars. Niki Caro, the director of Mulan, stresses that she wanted it to be a war story that is as grand, epic and authentic to the original sources. She has roped in the Hong Kong's top gun of the film industry, Bill Kong, known for Crouching Tiger Hidden Dragon and House of Flying Daggers for advice on approaching the film.

When the trailers were first released to the public in June 2019, the results truly speak for itself.

Synopsis
When the Emperor of China issues a decree that one man per family must serve in the Imperial Army to defend the country from Northern invaders, Hua Mulan, the eldest daughter of an honored warrior, steps in to take the place of her ailing father. Masquerading as a man, Hua Jun, she is tested every step of the way and must harness her inner-strength and embrace her true potential. It is an epic journey that will transform her into an honored warrior and earn her the respect of a grateful nation…and a proud father.
Excerpt from Walt Disney Studios official Youtube channel
“Mulan” features a celebrated international cast that includes: Yifei Liu as Mulan; Donnie Yen as Commander Tung; Jason Scott Lee as Böri Khan; Yoson An as Cheng Honghui; with Gong Li as Xianniang and Jet Li as the Emperor.
The film is directed by Niki Caro from a screenplay by Rick Jaffa & Amanda Silver and Elizabeth Martin & Lauren Hynek based on the narrative poem “The Ballad of Mulan.”

According to Wellington-born, New Zealander film director Niki Caro, she resonated deeply with the story of Mulan as a powerful and brave woman. Despite being a non-Asian director, Caro is no stranger to movies outside her culture. Caro earned critical acclaimed for her film Whale Rider (2002); a story of a Maori girl who wants to lead her tribe, a role traditionally reserved for men and forbidden for women.
Exclusive chat with the Actors - Crystal Liu Yi Fei, Jet Li and Donnie Yen, and director Nick Caro
Source: GSC Movie Talk
Disney has assembled an arsenal of international award-winning veteran all-Asian stars to bring Mulan to life. Here's the cast lineup that will be starring in the movie. Image sources: Insider
Chinese actress Crystal Liu Yiufei will be playing as the heroine, Mulan:
New Zealand actor Yoson An stars as Hong Hui, Mulan's possible love interest:
World renowned actor and martial artist Jet Li plays the Emperor of China:
Donnie Yen will play Commander Tung, Mulan's mentor:
Jason Scott Lee is the main antagonist Bori Khan:
Gong Li plays the witch Xianniang:
Behind the Scenes
In order to create the vision of a large-scale epic battle scenes, international stunt teams from China, Mongolia, Kazakhstan, New Zealand and Australia were brought in to work with. The stunt teams were given 3 months of intense and rigorous training to prepare themselves for the challenging battle scenes. As part of the training, Caro stated that the stunt members and actors had to learn Wushu style of sword fighting. With experienced Wushu martial artist Donnie Yen onboard the set, actors were made sure to be fully prepared and fight as authentically as possible.
Over 4000 weapons were made for the film!
Crystal Liu training behind the scenes.
Niki Caro refrained from using green screens for environment and backdrops. The entire crew was flown to China for the shoot. These locations include the Hubei province in Central China, the Singing Sand Dunes in Mingsha Shan Desert in Xinjiang Province, Zhangye Danxia National Geological Park in North Central China, Flame Mountain, Mazar Village and more. 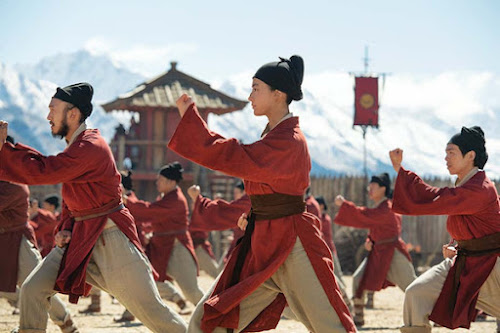 The battle scenes were shot in Caro's native country of New Zealand. Various scenic locations in the South Island was selected for shoot including the Mackenzie District, Poolburn, Rangiopo, Hanua, Muriwai, Woodpile and Ahuriri Valley. Nearly 900 people were filmed.
The best decision that Disney made is to bring back former Disney mouseketeer and global pop star sensation Christina Aguilera to sing the film's official main song, “Loyal Brave and True”. She will also sing the 2020 remake version of Reflection as a tribute to the original 1998 animation that fans loved. Crystal Liu, who is also singer, will lend her vocals in singing the gentler mandarin version of Reflection backed by a full orchestra. 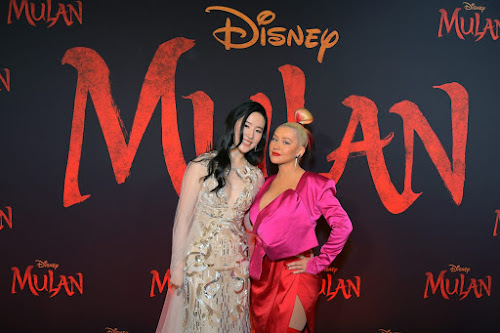 The new Mulan song by Christina; Loyal, Brave and True
The original classic fan favourite Reflection gets a 2020 remake.
Crystal Liu singing her version of Reflection in mandarin.
True to all things Disney, you can always bring a piece of Mulan home to your heart with these sweet merchandises available in the States.  Sadly, we won't be seeing this lovely merchandise on our local shores anytime soon. 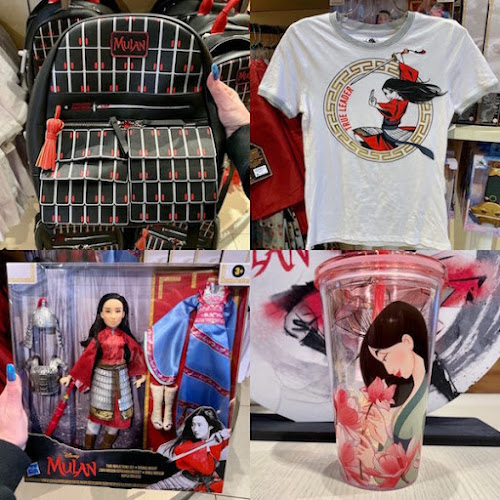 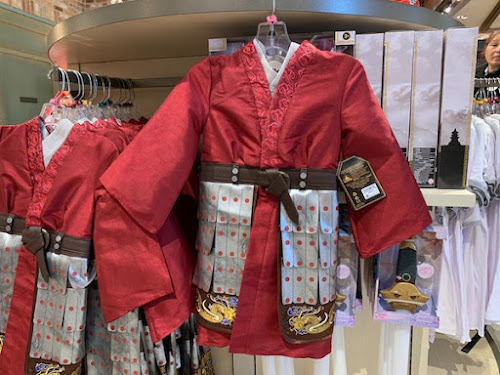 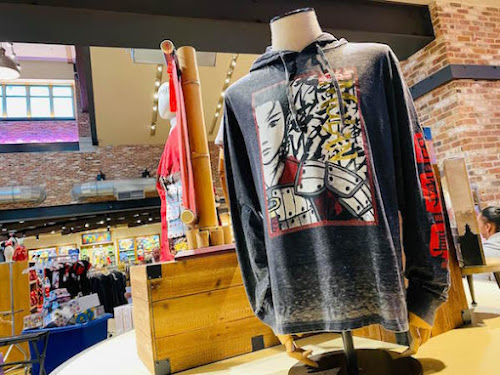 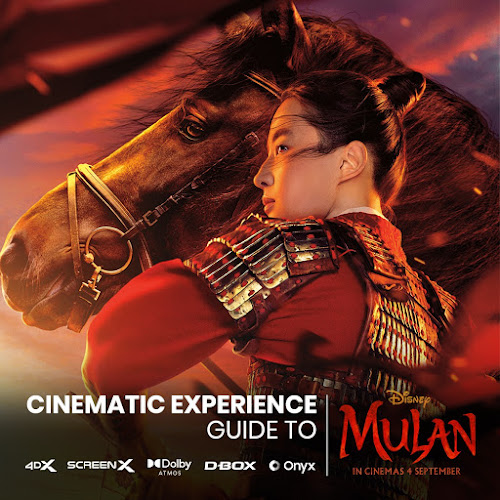 For ardent cinemagoers who crave a truly exhilarating cinematic experience in its full glory, GSC have you covered on 4DX, ScreenX, Dolby Atmos, D-Box and Onyx. So if you are convinced enough that Mulan is worth a cinema viewing, then head down to the nearest cinema and book tickets today. If you are still undecided, then we have a 2-cent non-spoiler review at the end for your consideration.
Before that, MBO Cinema is having a contest with exclusive Mulan prizes to be won. These mini posters of Mulan are also available while stocks last at selected MBO outlets. Head over to MBO's Facebook page to take advantage of their exclusive offers. 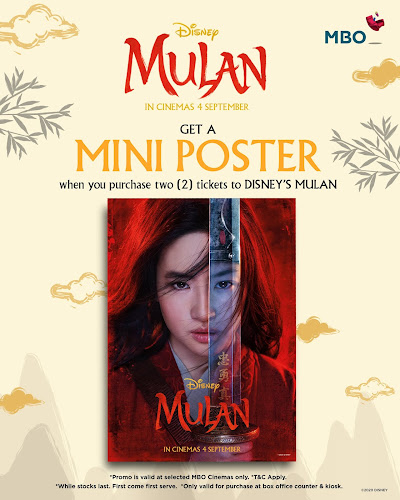 Non-Spoilery Reaction
Mulan is truly a visual spectacle with breathtaking landscapes, colourful costumes, elaborated stunts, and stunning choreographed fighting. For the most part, Niki Caro's vision of a more authentic and epic Mulan was delivered beautifully and feels made for the BIG screen. Indeed, Malaysians are most fortunate to be able to watch Mulan in its full cinematic glory where it deserves. There are subtle nods to the 1998 animated classics cleverly woven into the film that will surely delight Mulan fans. However, like the previous Disney live-actions, the story feels familiar and does not deviate far away from the original. The live-action made up for what the animation could not in terms of the realistic sword fights, choreographed martial arts, epic battle scenes and of course, the gorgeous backdrop and scenery. From this perspective, this is what makes the Mulan film stand out, making the animation classic pale in comparison. The stellar team of actors themselves breathes new life into the story. Liu Yifei's performance as the strong-willed Mulan feels genuine enough. For the most part, this is a moderate pace, action-oriented film with some touching moments in between that is sure to delight both fans and viewers new to Mulan.
MULAN is now showing in Malaysian cinemas nationwide.
#MulanMY #Mulan #Disney
Posted by Rei Hayashi No comments: