Usually when anyone sees ants, panic ensues and there’s a lot of insect repellent and toxic sprays going off. Let’s face it, ants are unwanted pests and will probably stay that way for a very long time. Except this time however, Marvel is bent on turning this traditionally pesky bug into a hero. Not just any hero, but the star of the next Marvel Universe instalment ‘Ant­Man’.
Ant­Man is the twelfth instalment of Marvel’s ongoing series of live action film. The last time we saw all our Marvel heroes was in the much celebrated second Avengers film just a couple of months ago. In this movie however, the focus is on only one hero, our titular Ant Man.

The producers have probably made an unexpected choice with the casting of Paul Rudd as the main character, Scott Lang. Paul Rudd has been known in the past to play supporting good guy roles, mainly due to his doe eyed look and boyish face.

It is safe to say that this is his first action packed role and the trailers are showing us that the action sequences are unconventional since there is no need to dodge bullets and life sized enemies. Instead, he struggles with things that aren’t usually threatening, like bath water. No kidding. Check out this clip of him being trained by his mentor.

Apart from Rudd, the cast also includes, Corey Stoll, Booby Cannavale and an almost unrecognizable Evangeline Lilly. Additionally, the producers have managed to get Michael Douglas to sign on as Hank Pym, Ant Man’s mentor.

The story begins with Scott Lang (Paul Rudd), a petty thief who is recruited by Hank Pym (Michael Douglas), former S.H.I.E.L.D. agent and scientist who developed the Ant Man suit. The Ant Man suit gives its wearer the ability to shrink to the size of an ant as well as superhuman speed and strength. Hank Pym was the original Ant Man back in his heyday and is looking for a successor of sorts to take on his mantel. Helping to train Scott into fighting fitness is Hank Pym’s daughter Hope Van Dyne (Evangeline Lilly). A sub­plot in the movie explores the Father­ Daughter relationship that Hope and Hank share. As a bonus, Hope Van dyne eventually takes on the character of ‘The Wasp’, also an insect sized super hero character that her mother used to helm.


Of course in every story, there has to be a villain, and here we have Darren Cross (Frank Stoll), a previous protégé of Hank Pym who copies the Ant Man suit and builds a militarized upgraded version of it to wreak havoc on society. Watch the full trailer to get a sneak peek into what the story entails:


Here’s another trailer that is slightly darker and focuses on how Hank Pym convinces Scott Lang to take on the Ant Man mantel:


You’d notice from the trailers that there are snippets of Ant Man actually communicating and mobilizing swarms of ants to help him on his quest. That would definitely be fun to watch Here at home in Malaysia, the Outpost Movie Recon Team has scoured various sites for promos and deals relating to the movie.

Golden Screen Cinemas are offering free Ant Man posters with a purchase of two tickets in any of their outlets, with four different posters that can be collected every week.

ONE Championship is having a contest where you can win Ant Man collectibles by answering three simple questions. Contest ends on July 18

A similar contest is being held on Budiey.com which involves answering some questions and coming up with a creative slogan. This contest ends on July 22 win pin badges, lanyards, earphones and key chains in addition to T­shirts and caps.

The Outpost Movie Recon Team hosted a fan screening on the Opening Day itself with all seats occupied fans gathered marching in the hall like ants. The movie outing was a great success with many more to come if fans wish for it. 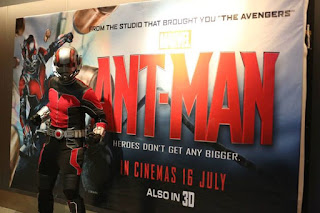 For those who want to buy limited edition custom Ant Man merchandise, we have found some local online stores that sell all sorts of these products:
ZALORA has a T­shirt with prints of the original Ant Man comic book cover for Marvel fans who grew up with the comics.
At LittleKindle, you can find a Funko!Pop Marvel Ant Man figurine at a discounted and very reasonable price

Mother Ship Toys also have an 1⁄4 scale size Ant Man figurine that is modelled on the original comic book version.

Robotica Toys is offering a set of three figurines, Ant Man, Ant Man Blackout and Yellow Jacket up for sale as well. All the models come from this latest movie and are too good to give up, not to mention we like the affordable price it's going for.

Of course as always, we hope that the Movie will be a memorable experience, especially for fans of the comics, who will no doubt relish the thought of their hero making it to the big screen.


Spoilers: Fans who have not caught the movie yet. Don't forget to stay back for the Mid Credits and End Credit Scenes.
Posted by Outpost Productions No comments: