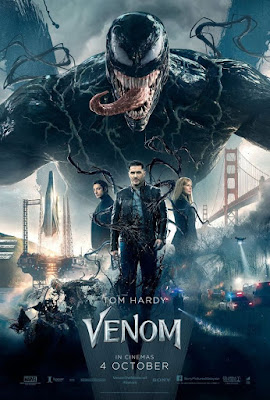 This week spawns another Marvel comic-book movie in the form of Venom from Sony Pictures, the same film studio that brought us the Spider-man franchise (as portrayed by Tobey Maguire, Andrew Garfield and Tom Holland). However, the film universe that Venom exists is removed from the one presently occupied by the latest Spider-man incarnation, which shares the Marvel Cinematic Universe (M.C.U.) as seen by Holland's Peter Parker in Captain America: Civil War (2016), Spider-man Homecoming (2017) and Avengers Infinity War (2018). As Sony holds the rights to approximately 900 Marvel characters, the film studio has since announced that Venom will begin Sony's Universe of Marvel Characters (SUMC, an internal label of convenience). Venom's comic book origins date back three decades to 1998 as a major super-villain of the Spider-man saga. Created by David Michelinie and legendary artist Todd McFarlane, Venom first appeared in the pages of The Amazing Spider-man issue #300 with his first comic book cover in issue #316. Prior to this, Peter Parker donned a black version of his costume which was later revealed to be a living sentient alien.

Before delving further, it may benefit non-Marvel fans to explain what is a Symbiote to set the proper context. By the English dictionary, a symbiont is defined as:

Anyway, Parker rejected permanently bonding with the Symbiote and forcibly repelled it. This unwittingly lead to the Symbiote bonding to disgruntled reporter Eddie Brock who nursed a strong hatred of Spider-man. Hence began lengthy clashes between the two foes over the years, including a number of team-ups against greater threats.


Venom's first appearance in live-action actually took place in 2007's Spider-man 3 where the Symbiote adopted a similar origin as the comics. Eddie Brock played by Topher Grace is bonded to the Symbiote immediately after Peter Parker (Tobey Maguire) expels it from his body using the sonic frequency of a church bell to weaken the alien lifeform; see the scene above. Unfortunately this only happens far into the movie so audiences and especially Marvel fans were not treated to much character development of Venom, which was further diluted with shared screen time with other major villains of the Sandman and new "Green Goblin".

For more intimate facts about Venom, check out this article by Says.com.

This week a new incarnation of Venom will be unleashed as portrayed by British actor Tom Hardy, known for this role as Batman's nemesis Bane in The Dark Knight Rises (2012), Max the lead star of Mad Max: Fury Road (2015) and Shinzon in Star Trek Nemesis (2002).


Movie Synopsis:
Journalist Eddie Brock is trying to take down Carlton Drake, the notorious and brilliant founder of the Life Foundation. While investigating one of Drake's experiments, Eddie's body merges with the alien Venom -- leaving him with superhuman strength and power. Twisted, dark and fueled by rage, Venom tries to control the new and dangerous abilities that Eddie finds so intoxicating.


This new Eddie Brock / Venom will not a be sequel from the aforementioned Spider-man 3 or the two subsequent Amazing Spider-man reboots, therefore wiping the previous slate clean. Hardy has been reported to have signed on for 3 Venom movies, hinting that the Symbiote saga may be here to stay, obviously depending on the box office of this inaugural outing. And fans seem to be reacting well to Hardy's casting of this much beloved Anti-Hero compared to his predecessor Topher Grace, who himself admits not know why he was cast.

The events of Venom take place in the city of San Francisco, which Marvel fans may be more familiar as also the home grounds of Ant-man (and The Wasp). As can be seen from the trailer Venom's origin story will be much changed from the comic books and previous outing as there seems to be no Spider-man in this universe to inherit the Symbiote. Instead the Symbiotes seem linked to  the Life Foundation headed by Carlton Drake (Riz Ahmed, Star Wars Rogue One), a genius technologist paving his own vision for the future of humanity. His research includes reaching out to the stars, literally going where no man has gone before, and bringing back new discoveries no matter the cost. The latter of course brings Drake into conflict with Eddie Brock as an investigative journalist.


Behind-the-scenes from the set of Venom with Tom Hardy.

Softening the male cast and Symbiotes is Michelle Williams (The Greatest Showman, Oz The Great & Powerful) as Anne Weying, Brock's romantic interest. Hardcare Spidey fans may also recognise this name from comic books as the human alter-ego of She-Venom. Other supporting characters do not stand out as star billing, but do look out for Woody Harrelson and a gratuitous cameo by the master, Stan Lee. Followers of Marvel's Luke Cage on Netflix may also recognise the familiar face of Ron Cephas Jones who played Bobby Fish, Luke's friend and often times conscience, although in a different role in this movie (it's oklah since SUMC is separate from MCU).

As what has become staple for Marvel movies, expect 2 post-credit scenes to wet your geekiness. Plus minor SPOILER... Malaysia lands a surprise mark in the SUMC. 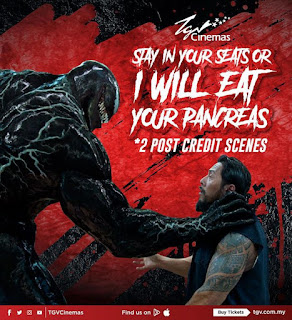 Locally our top cinemas looks hyped for Venom and are offering a slew of promotions. Starting first with TGV Cinemas, they will be hosting Special Screenings of Venom for fans in IMAX on Saturday 6 October 2018 at multiple cinema locations in Klang Valley, Penang, Johor Bahru and Kuching. A specially priced movie ticket of RM40 per pax includes IMAX 2D screening, a Venom t-shirt & poster, preceded by dinner with fan activities. At time of this writing there is limited availability for purchase direct from TGV's website.

Check out this micro-site for other Venom promotions by TGV. There is also a public Facebook contest offering the chance to win movie premiums; closing 4 October. 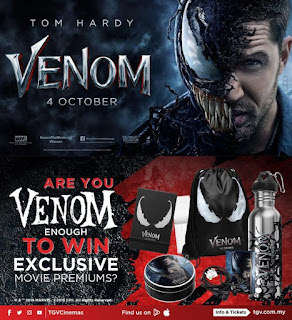 Over at GSC Cinemas, a whole load of gift with purchase items are being offered for customers as follows: 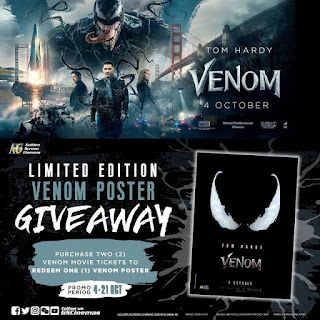 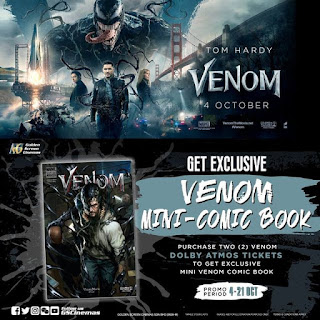 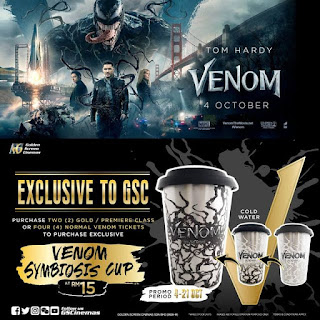 Furthermore, GSC also has Play & Win Roadshows for Venom at multiple locations where presumably patrons are tasked to "play" assorted games for the chance to win Venom movie merchandise. See the roadshow schedule below: 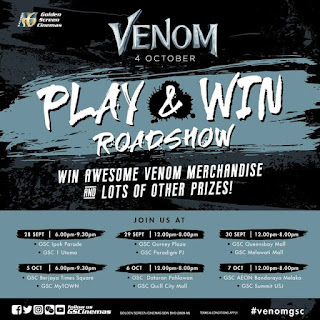 Meanwhile MBO Cinemas is offering a Venom edition card for their AllStar members as well as a Watch & Win Contest putting up a Sony Dolby Atmos sound bar up for grabs plus Venom movie premiums. 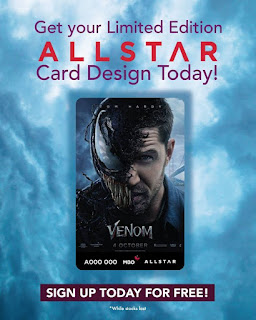 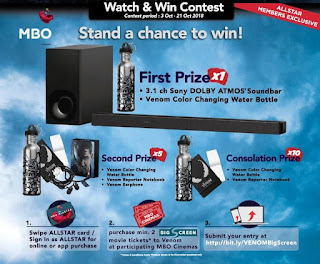 For further details head to their micro-site.

Venom is rated P13, so do not expect to see gory entrails on screen... the producers will leave that to overactive imaginations. Head over to cinemas now to experience the latest Venom and let us know what you think if Marvel's latest anti-hero.

Disclaimer: Venom and associated trademarks are copyright to Marvel under license to Sony Pictures, referenced here for fan service announcements without intent to infringe.