Friendly neighborhood web slinger Spider-Man is coming to the big screens and this might be the best Spider-Man movie ever. So get your popcorn ready. You wouldn't want to miss this movie. 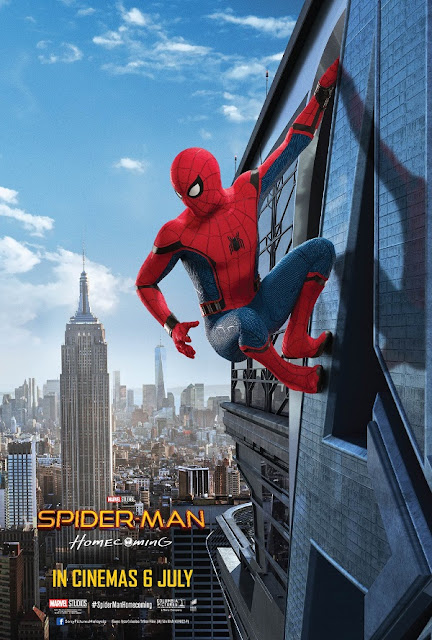 Official Synopsis:
A young Peter Parker/Spider-Man (Tom Holland), who made his sensational debut in Captain America: Civil War, begins to navigate his newfound identity as the web-slinging super hero in Spider-Man: Homecoming. Thrilled by his experience with the Avengers, Peter returns home, where he lives with his Aunt May (Marisa Tomei), under the watchful eye of his new mentor Tony Stark (Robert Downey, Jr.). Peter tries to fall back into his normal daily routine – distracted by thoughts of proving himself to be more than just your friendly neighborhood Spider-Man – but when the Vulture (Michael Keaton) emerges as a new villain, everything that Peter holds most important will be threatened.

Some moviegoers may feel they have seen enough of Spider-Man. This is after all Sony Pictures' third attempt at the franchise. So what is special this time?

As some of you folks would be aware, licensing rights for trademarked Marvel characters are spread out amongst various movie studios. The more widely popular successful transitions from comic books to films are the X-Men mutants by 20th Century Fox, the Spider-man saga via Sony Pictures and more recently the Avengers by Marvel Studios. Due to licensing rights, movies by each studio existing in it's own "pocket universe" and thus characters that regularly team-up in Marvel Comics could not happen in live-action productions.

The Marvel Cinematic Universe (MCU) was launched in 2008 by the first Iron Man movie paving the way for a handful of solo superhero titles leading up to the ensemble team of The Avengers in 2012 to massive box office success exceeding USD1.5 billion . Previous Spider-Man movies typically score the USD $700-800 million mark. No doubt seeing a most lucrative opportunity with Marvel's most popular superhero to swing higher in the box office, Sony Pictures and Marvel Studios revisited the licensing rights for Spider-man in 2015 allowing web-head to be part of the MCU. And that's what makes Spider-man Homecoming so special this time around: Welcome home Spidey to the Marvel Cinematic Universe!

British actor Tom Holland is the first teenager to play the role of Peter Parker/Spider-Man. Which makes sense. You get a teenager to play a teenager. Why hasn't this been done before with Spider-Man? At only 5ft 7in, he looks boyish and he can perform back, side and front flips. Manohla Dargis of the New York Times, a long time film critic, says “Mr. Holland looks and sounds more like a teen than the actors who've previously suited up for this series”.


We were first introduced to Spider-man in the MCU last year in Captain America: Civil War. Recruited by Tony Stark, he fought along side Iron Man and stole Captain America's shield in his superhero debut. He then traded blows with many of the MCU's veterans is one of the most epic superhero battles on screen. Let's just watch it again, ya?


The Airport Battle: One of the greatest action sequences in superhero cinema.

In Spider-Man: Homecoming, Peter Parker returns from his experience with the Avengers, under guise as the Stark Internship Program, to resumes his high school life. But being left with Stark's awesome Spidey suit, Peter's yearns to prove himself for admission into the Avengers and swings into action as the "neighborhood" Spider-man in New York's suburb county, Queens.

After 2 months of mundane superhero-ing after school, webhead gets into trouble with some serious bad guys and learns what it takes to truly be a hero. Enter the Vulture, one of Spidey's iconic villains from the comics.

Early reviews for Spider-man Homecoming are out now and it seems to be overwhelmingly positive. It is currently sitting at a fresh 93% over at Rotten Tomatoes. Vox has listed 5 reasons why this is the best Spider-Man movie yet. Screenrant says “Spider-Man: Homecoming works as both a (very) funny high school comedy/drama and strong standalone superhero movie set in the MCU”. Newsweek calls it "the best Spider-man movie to date". IGN has rated the movie 8.7.

Whilst locally written reviews are not out yet, listen to At The Movies where Umapagan, Iain McNally and Bahir Yeusuff compare Spider-man movies past and present. 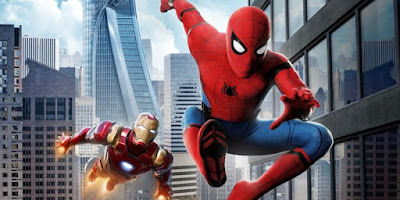 Be sure to stay during the end-credits as well as there will be 2 post-credit scenes. The first scene takes place mid-way and the second at the very end. So when the credits roll, don't leave your seats yet! 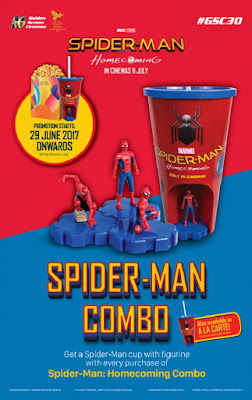 Marvel movies are definitely popcorn movies. For your popcorn needs, GSC Cinemas has a cool concession counter combo consisting of one Spiderman: Homecoming Figurine Cup (3 designs) and a regular popcorn. 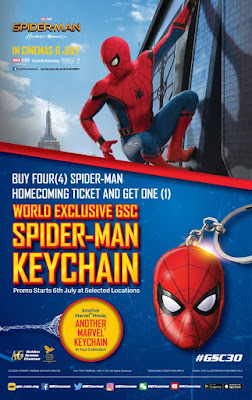 GSC Cinemas is also offering 2000 pieces of Spider-man keychains at selected locations. Every 4 movie tickets purchased from 6 July will be entitled for 1 keychain (while stocks last). 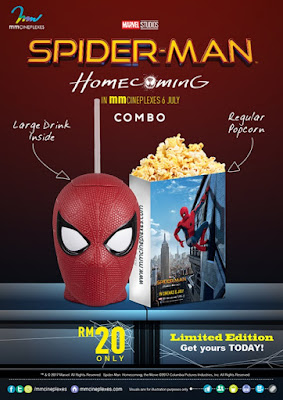 mmCineplexes variant of the popcorn combo offers a Spider-Man Head Tumbler with a 32oz drink (like sucking brains out of Spidey!) and a regular popcorn for RM20. 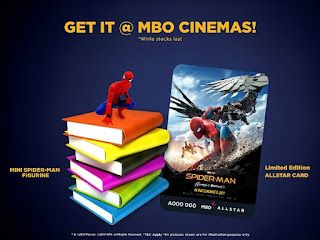 MBO Cinemas does not have a popcorn combo but instead a mini-Spider-man figurines for RM7.90 and exclusive tshirts for RM39.90 available with purchase of 2 movie tickets. The figurine can also be used to for their Facebook and Instagram contests to win movie merchandise. 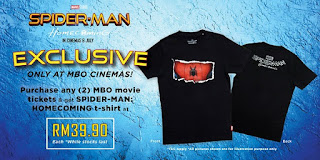 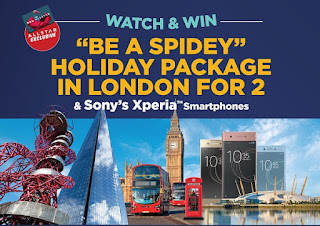 They also have their limited edition Spider-man Homecoming Allstar member card. Members are really in for a treat as purchase of only 2 tickets will entitle to participate in the "Be A Spidey" contest to win a holiday package to London plus Sony Experia smartphones. Members may also bid for movie premiums. Find out more directly from MBO Cinemas.

Whilst we can't figure out Spidey's association with London, we do know he comes from New York and Maybank has certainly caught on to this by offering their customers a chance to win a trip to the Big Apple. This Grand Prize is only applicable to new credit or charge card holders though. Existing cardholders can instead redeem free popcorn with purchase of 2 movie tickets from TGV Cinemas using their Maybank card from 6 July. Head over to the official Maybank website for full details on their promotions. 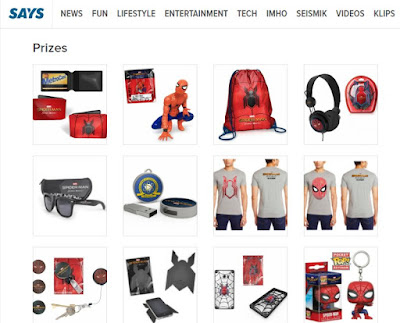 For the chance to win Spider-man Homecoming Movie Premiums, join the KLIPS contest before 7 July. There are tshirts, sunglasses, wallets, Funko POP keychains and more to be won as shown in the visuals above.

More of these movie premiums are available from GSC Cinemas through their Instagram contest for Spidey fans visiting Pavilion KL shopping mall in downtown Kuala Lumpur. Post your photo with the giant Spider-man display on Instagram to participate. 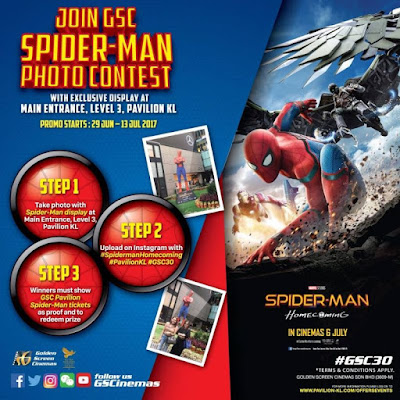 As for toys, lotsa official Spider-man Homecoming action figures and role play products from Hasbro are available from major toy retailers like Toys R Us. LEGO also has 2 building sets for the movie. 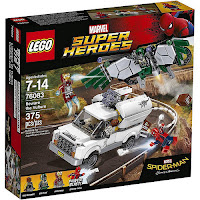 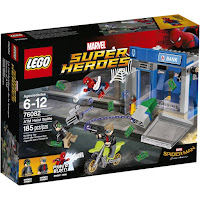 No one is ever too old of LEGO!


To celebrate Spider-man coming home to the Marvel Cinematic Universe, Outpost brought together Spidey cosplay fans for a special Fan Screening of Spider-man Homecoming on Thursday 6 July at mmCineplex Damansara, e@Curve. Together with Spiderpools of Malaysia (SPM) and The Ultimate Cosplayers (TUC), this could be the most diverse number of Spider-Verse cosplayers to-date in Malaysia. 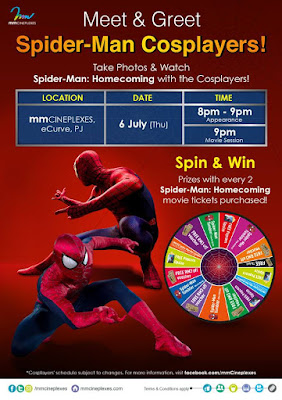 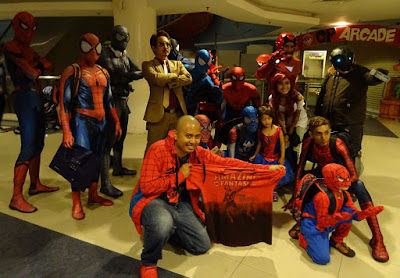 Check out more photos from this Spider-Friends gathering at the Facebook Pages of Outpost Productions and mmCineplex. Also thanks to The Star for featuring us in the news; read the online edition here. 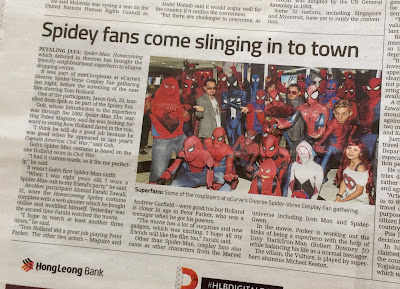 For every 2 tickets of Spider-man Homecoming purchased at mmCineplexes, customers can participate in Spin & Win for a guaranteed chance to win goodies like movie merchandise, Spidey tumbler, movie tickets, & more. Get the full details from mmCineplexes website. 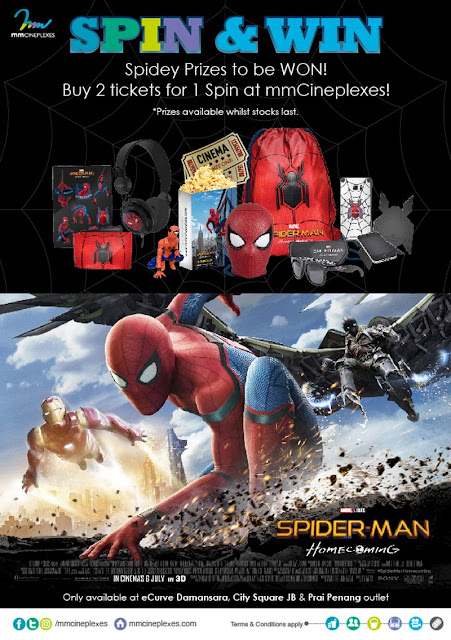 Must-Watch Movie of the Year!


Disclaimer: Spider-Man and other trademarks are copyright to Marvel and/or Sony Pictures, referenced here for fan service announcements without intent to infringe.