It's another LONG weekend in Malaysia, where this year is providing us Malaysians opportunities aplenty to escape from work and relax. For those not travelling on holiday, there is ample opportunity to binge watch the many TV shows, movies and other entertainment available on Netflix. 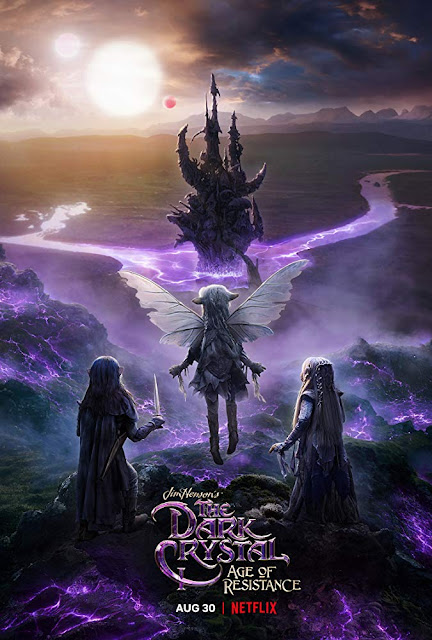 For geeky enthusiasts like ourselves, Netflix has just released The Dark Crystal: Age of Resistance as a 10-episode series. Yes, this is the same world of The Dark Crystal way back in 1982 of Jim Henson's puppets. However, the Netflix series is a prequel to the original movie. Here's the synopsis:


Return to the world of Thra, where three Gelfling discover the horrifying secret behind the Skeksis' power, and set out to ignite the fires of rebellion and save their world.


Read in-depth reviews of The Dark Crystal: Age of Resistance here by CNET and VOX.

Like a bonus of Netflix users, the original cult classic The Dark Crystal is also available for streaming. Those new to the world of Thra may wish to take opportunity to binge watch in the 10 episodes prequel series before viewing the original movie for a chronological experience, much like younger Star Wars fans today may watch the movies in sequence from Episode I to VIII.

The following feature is provided by Netflix as a guide to its features that support binge watching:

Tanggal tiga-puluh-satu, bulan lapan lima-puluh-tujuh. If you read that with the late Sudirman Arshad’s ‘Tanggal 31’ tune in your head, it’s one of those things that make you truly Malaysian. That’s right - Merdeka!, Merdeka!, Merdeka!

This year, Malaysia celebrates its 62nd year of freedom, marking the anniversary of the day the Federation of Malaya gained independence from the British rule  on the 31st of  August 1957. Cue the display of fireworks and the flag-waving patriotism while we spectate the grand parade along the iconic Dataran Merdeka. Every year, this is how we pay homage to our founding fathers, Tunku Abdul Rahman, Tun V.T. Sambanthan, Tun Tan Cheng Lock and many more Malaysians who fought tooth and nail to ensure that we had the freedom to be our own democratic nation.

Fast forward to 2019, Malaysians are enjoying a different kind of freedom, now with the  seamless convenience of connectivity and the power of choice in a click of a few buttons. And Netflix offers just that. The freedom to choose from more than 140 million hours of TV shows and movies, and watch as much as you want, anytime, anywhere, on nearly any Internet-connected device. The best part is that you also have the freedom to play, pause and resume watching, all without commercials or commitments. Heck, you can even make choices for the characters of  Black Mirror: Bandersnatch and choose how the story unfolds.

Additionally, there are other ways to #BebasBersamaNetflix:

We Malaysians want to watch our favourite shows uninterrupted, whether on the plane or in environments with intermittent bandwidth. Boy, do we know the pain of varying internet conditions and bandwidth limitations that have resulted in a less than satisfactory experience - buffering problems, intermittent outages and high data usage (and with it, costs) that often leaves us frustrated.

With Netflix, you can get an enhanced viewing experience with the Smart Downloads feature that allows you the flexibility to stream or download shows to watch offline without consuming too much data or memory, making it possible for you consume content on-the-go. Giving members more control over their entertainment experience is at the heart of everything we do and members can choose when they want to use Smart Downloads.
Smart Downloads is available on devices supporting downloads installed with the latest version of the Netflix app for Android mobile devices, iOS mobile devices, Amazon Fire tablets, and computers and tablets running Windows 10. 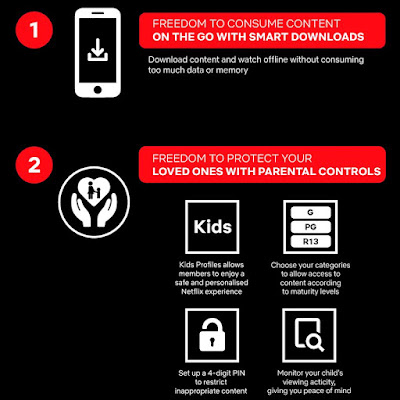 Parental controls are essential in ensuring the safety of your children online as parents are able to limit or restrict access to specific content that is deemed inappropriate. To ensure a safe viewing experience for the whole family, Netflix has a series of features and controls that can be accessed via the website on any desktop that help parents adjust and personalise the selection of content that can be accessed. 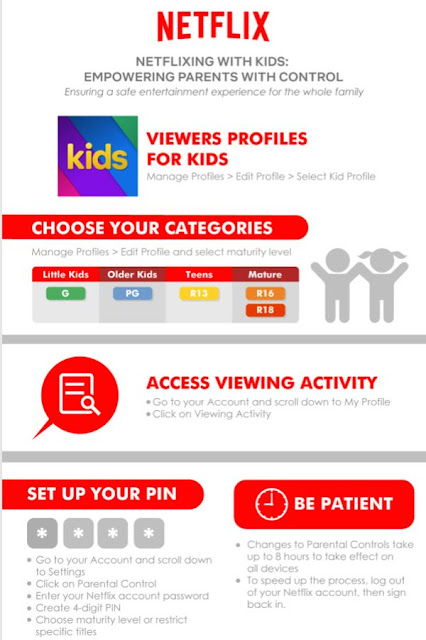 Netflix is constantly looking to curate new stories and find new voices in the unlikeliest of places whilst giving creative partners the freedom and opportunity to tell their stories the way they want to and find new audiences they’d never have had access to previously. In Malaysia, Netflix continues to expand its offerings of Malaysian content, allowing local stories to travel to more people than ever before.

New additions include Till Death: Azalea’s Wrath, written, directed and produced by local filmmaker, Sein Qudsi, is the first Malaysian movie that is exclusively available on Netflix. Featuring Khir Rahman, Vanidah Imran Nam Ron, Kodi Rasheed, Zain Hamid and Zulaika Zahari, the film is about a couple who just lost their baby due to complications during childbirth, and they move to a new house to start fresh. Little do they know, the house carries a dark secret and their journey of hardships have only just begun.

In celebration of Merdeka and National Day, Netflix is showcasing Bebas Bersama Netflix with its diverse offering of Malaysian content for viewers around the world, including some of the best Malaysian Box Office Hits including Munafik 2, Hantu Kak Limah, and Paskal: The Movie, Pulang, Jagat, and the multiple award winning Crossroads: One Two Jaga. Watch now at netflix.com/bebasbersamanetflix 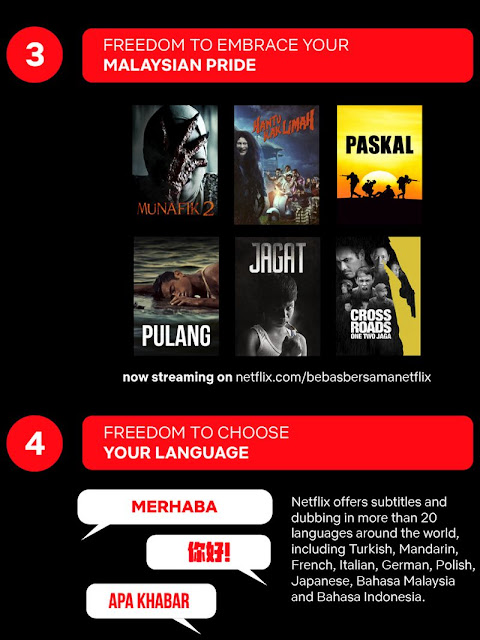 Our nation is a melting pot of cultures, customs and languages and so is Netflix with its constantly growing library of content that comes in a vast variety of languages and diverse stories from content creators across the globe. Netflix’s international movies and series, including Money Heist from Spain, Sacred Games from India and Paskal: The Movie from Malaysia have managed to gain fans beyond their home base, proving that great storytelling can be appreciated by people all over the world regardless of what language you speak or where you are from.

Netflix believes that great content and the consumer experience shouldn’t be sacrificed with bad subtitles or dubbing. With this comes constant innovation to ensure that these international stories are conveyed in a way that stays true to the creative intent, optimising the viewing experience for you no matter what language you are watching in.

The service currently offers subtitles and dubbing in more than 20 languages around the world, including Turkish, Mandarin, French, Italian, German, Polish, Japanese and Bahasa Malaysia and Bahasa Indonesia.

Netflix offers an array of original series, movies, documentaries, stand up comedies and kids TV shows in addition to a broad variety of licensed programs. This year, Netflix pushed the boundaries of storytelling by adding an interactive element where you decide what the characters do and how the story plays out. This way, each choice leads to a different adventure, so you can watch again and again, and see a new story each time. 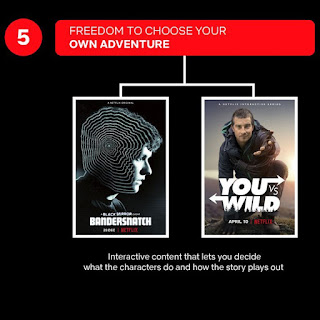 There are currently several original interactive titles, with more in the pipeline:
#BebasBersamaNetflix now at netflix.com/bebasbersamanetflix.

Did you know Netflix's big-budget historical epic Marco Polo was filmed in Malaysia at Pinewood Studios, Iskandar Johor? It ran for 2 seasons from 2014 to 2016 starring Lorenzo Richelmy as the namesake Marco Polo, Benedict Wong as Kublai Khan, Joan Chen as Empress Chabi and Tan Sri Michelle Yeoh as Lotus (in full martial arts glory). You may also spot a few Malaysia actors appearing like Patrick Teoh.

Here's the Season 2 trailer and featurette:

Binge watch all 20 episodes this Merdeka on Netflix and marvel at this "Buatan Malaysia" production.

This article written for purpose of fan engagement without intent to infringe trademarks and copyright of their respective owners.
Posted by Outpost Productions No comments: