Star Wars is arguably the most epic space adventure to date, with millions of fans worldwide spanning different generations and demographics. The scale and magnitude of the Star Wars universe started out small and humble with the original trilogy spanning the late 1970s and 1980s. However, it has expanded to such a scope that there are now back stories to explain the rise of the Jedi and the Sith, as well as a book series on the descendants of Han Solo, Princess Leia and Luke Skywalker. There are even lengthy entries on Wookiepedia each of the creatures at the bar on Mos Eisley (called the Mos Eisley Cantina) where Obi-Wan and Luke meet Han Solo for the first time!

Many Star Wars elements have made it into our daily lives, with the ubiquitous lightsaber being the most recognizable. In the last decade, there have been reports of people all over the world listing ‘Jedi’ or ‘Jedi Knight’ as their religion in response to official government census. What draws people in such a powerful way to this franchise? Well, even experts don’t really agree on one particular cause. Suffice to say it’s a complex mix of sentimentalism, escapism and good ol’ storytelling.

For many fans, the continuation of the original 6 episodes with a new trilogy is an almost religious experience, akin to receiving new revelation. Therefore, these months and weeks leading up to the release of Episode VII is filled with a feverish excitement, brought on mostly by those bits and pieces of teasers that Disney (who has bought over the franchise from George Lucas) keeps feeding fans, just like hors d’oeuvres before the main meal begins.

With not long to wait now, fans are spending their days refreshing their memories by re-watching the previous six episodes. However, if you’re a super busy Star Wars fan, here’s a 3 minute recap:

The highly anticipated Episode VII: The Force Awakens is being directed by J.J. Abrams, known for his penchant for lens flare and his previous science fiction movies like Armageddon and the recent Star Trek remakes. This time, the trilogy will be helmed by two British actors, John Boyega and Daisy Ridley as the two protagonists, Finn and Rey respectively. The original actors who play Princess Leia, Luke Skywalker and Han Solo are back as well, much to the delight and comfort of fans. Who can forget Carrie Fisher, Mark Hamill and Harrison Ford? 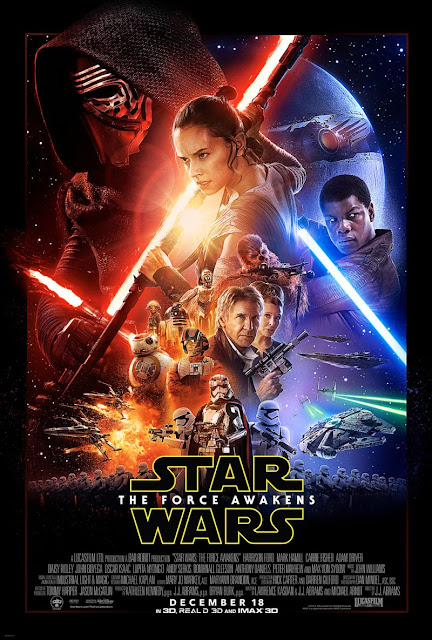 Additionally, we’ll get to see the talents of many other new faces, like Adam Driver who plays villain Kylo Ren, Domnhall Gleeson as General Hux, Lupita Nyong’O as Maz Kanata, a space pirate and Oscar Isaacs as Poe Dameron, a pilot with the resistance. Interestingly, Gwendoline Christie also makes an appearance as Captain Phasma, an officer with the First Order.

Just to make the wait a little less unbearable, you can watch a compilation of all the teasers and trailers that have been released thus far:

No doubt, many fans feel a tug in their hearts when Han Solo says “Chewie, we’re home”.

Not much is known about the storyline, except for the bits and pieces that can be picked out from the trailers. It would appear that even though the Galactic Republic has fallen, there continues to be a military power called the First Order that upholds the ideals of the old Republic and will resort to violence to get what they want. At the forefront of the First Order is the mysterious Kylo Ren (nobody can confirm or deny he’s a Sith Lord yet) who uses an extremely unique lightsaber in the form of a red cross. Rather ironic methinks.

The resistance is still going strong, under the leadership of Princess Leia, who now goes by the name of General Organa. However, as the title suggests, no new Jedi have emerged until our two protagonists, Finn and Rey show up. Many hold the opinion that the original trio are portrayed very well in this new film, with all of them aging gracefully. They also seem eager to pass on the reins of leadership to a new generation of legends, so it’ll be worth the wait to see how that pans out.

Also, everyone is going crazy about the new droid BB8, which can be seen rolling around in the dessert with Rey and making cute gurgling noises.

Before anything else, you should definitely check out the Official Star Wars Website that has a tonne of information, videos, games and more to keep you occupied until premier day. Not only are there goodies for the upcoming movie, but info on all the previous episodes, as well as several animated TV series. One of the videos you can watch is of Mark Hamill recently pranking people on Hollywood Boulevard for charity:


Closer to home in Malaysia, the Outpost Movie Recon Team (M.R.T.) has scoured the galaxy to bring you promos and other goodies related to The Force Awakens. Firstly, all the major cinema chains have opened their advanced tickets sales (online, at the tickets counters and through their apps) but you’d better hurry as all the major cinemas are selling like hot cakes. Tickets are available in standard, 3D and IMAX3D. 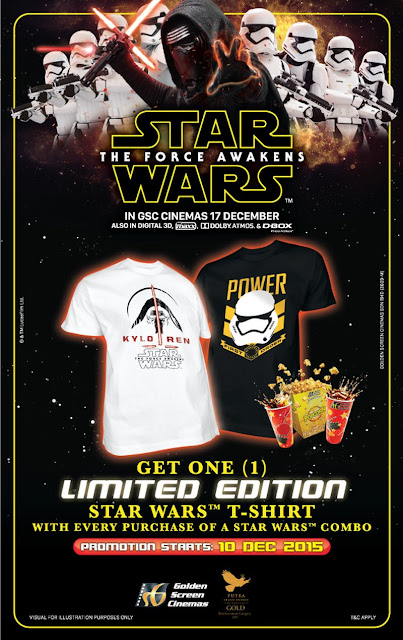 Golden Screen Cinemas is has a number of Star Wars merchandise up for grabs. Firstly, their latest Popcorn Combo includes a limited edition Star Wars T-shirt, 2 regular soft drinks and 1 large popcorn starting for RM30.00. There are 2 tshirt designs to choose from (see above) to prepare to guzzle down lots of popcorn with soft drink if you want to collect both. An exclusive Star Wars Collector’s  package is available on available through GSC website, limited to only 400 packages for RM199 (see below). In addition to both limited edition tshirts plus movie posters, popcorn, soft drinks and movie vouchers, there is a pair of metal Light Side & Dark Side collector cards which will be personalised with your Star Wars name (well, actually any name is possible upto 16 letters). 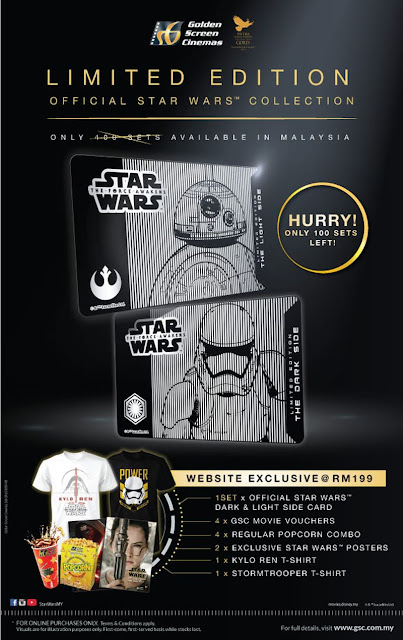 Starting 17 December, GSC has awesome Star Wars loot up for grabs everyday day until 30 December 2015. Customers only need to post their photos on Facebook or Instagram showing their GSC movie tickets with a creative caption and hashtag #TheForceisStrongwithGSC for a chance to win a Kylo Ren FX lightsaber worth over RM1,000 and his voice changer helmet (see below). It's so good to be bad!

TGV Cinemas are having a tonne of promos related to Star Wars this month. Together with Star Wars Malaysia Fan Club, they are hosting a Christmas Cosmos from 10th to 20th December at 1 Utama Shopping Centre Court (Old Wing). Activities include Star Wars costume appearances by Star Wars Malaysian Fan Club, Lightsaber performances, collectibles display, a flea market and giveaways. Additionally, TGV is also selling Star Wars plush keychains as part of their combo, with 5 different characters available from 10th December Onwards. Additionally, TGV cinemas is holding a contest for Maybank Credit Card users who spend more than RM1000 from 1st November 2015 to 15th January 2016 with the grand prize being a Star Wars themed trip to London for two. 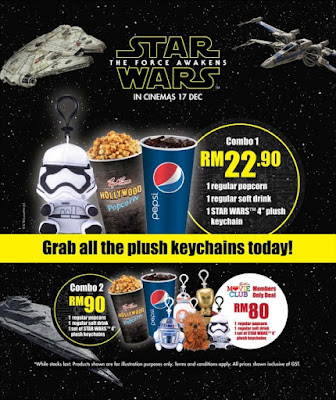 Also if you’re buying tickets to the opening day, 17th December 2015, know that TGV is holding screenings all the way from 12 midnight to 6am so you don’t have to wait for the daytime screenings. If you’re a cosplayer, you can show up at any of the screenings in costume to get a free cup of coffee from Wonda’s Coffee. Specifically, TGV Sunway Pyramid will be holding a small event one hour prior to each night screening where patrons can take part in costume dance offs, droid races, a Battlefront Challenge, a photo booth and consume refreshments aptly named Leia’s buns, Skywater and Han’s wrap.

Meanwhile MBO Cinemas has tied up with Funko Pop for exclusive Star Wars The Force Awakens figurines toys purchased together with their popcorn combo from now until 31st December 2015. 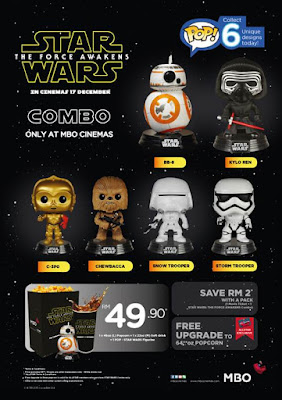 At Subway, get a free Star Wars keychain whenever you purchase a 6” sub and soft drink, with a new keychain each week. Collect one each week until Jan 5th 2016. 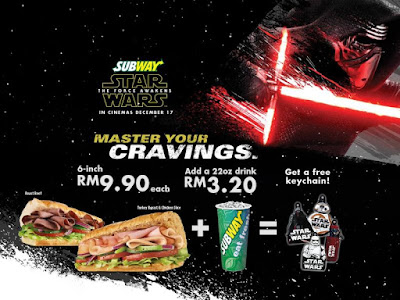 For fashionable geeks, Uniqlo line of Star Wars sweaters, T-shirts, parkas and more are now all available at reasonable prices.

HP Malaysia  has a special Star Wars edition notebook on sale especially for fans who want to display their fandom is very obvious ways.

Our very own local establishment, Royal Selangor Pewter has released their Star Wars collection, which includes figurines of Leia, Han Solo, Yoda, Darth Vader and a miniature replica of the Death Star. You could also try to win any of these for free by joining their contest. 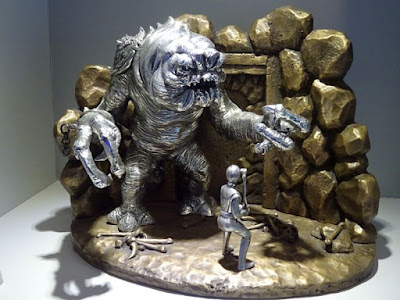 Toys and figurines of Star Wars characters, weapons, ships and more are available from Mattel, Hot Toys, Lego and Hasbro as well as other production companies. You can catch some of these at the Star Wars: The Force Awakens event at MidValley or look for them at online toy stores nationwide.


But if you don't want to spend credits on official merchandise, online movie site KLIPS is having a special giveaway of Star Wars products including a star projector, caps and mugs all the way until the end of December 2015. All you have to do is sign up and enter their simple contest. 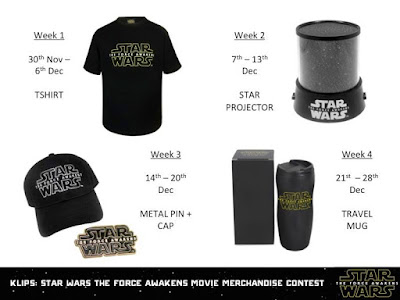 Toyota Malaysia is also getting in on the Star Wars hype by offering free movie passes to the Force Awakens to anyone who drops by their showroom and test drives a car. Also if you choose to purchase a Toyota, you’ll be in the running to win an exclusive trip to Pinewood Studios, London, where the movie was made.

The Malaysian Philharmonic  Orchestra is putting up an intergalactic inspired performance called Star Wars and Beyond featuring John William’s sweeping score on 17th and 18th December 2015 in conjunction with the movie’s release.

Mid Valley Megamall is currently hosting a Star Wars: The Force Awakens integrated Event at the South Court concourse which is going on until the 27th of December 2015 (which means it’s still on, yay!). The highlight of the event is an 80% scaled replica of the Rebel Alliances T-70 X-Wing fighter appearing in the new movie. Visitors are allowed to take a picture of themselves in the cockpit of the said replica, and enjoy other attractions like a figurine display, interactive game booth, merchandise sales and more.


FAST surprised mall patrons with a flash mob at Midvalley

For a full-sized replica of the X-Wing, head down south into Singapore and visit Changi Airport Terminal 3. There is also a scaled down TIE Fighter in Terminal 2.

There are a tonne of events being organized to celebrate Star Wars episode VII, especially by the various fan clubs and associations, so keep a look out by visiting their websites or facebook pages. These Star Wars clubs to keep an eye on include:

As Star Wars fans await with eager hearts and anxious heads for the new movie to be released, let us all hope that this new trilogy will be the beginning of yet another adventure that will bring us back to where it all begin and remind us why we fell in love with the series in the first place.

Thanks to our Alliance with Star Wars Malaysia Fan Club and Rebel Legion, Outpost costumers got to attend the Premiere of Star Wars The Force Awakens at GSC Pavilion KL on Wednesday 16 December 2015. 2 days later, a larger contingent of costumers got together for another screening at Premium-X Cinemas at OneCity USJ. Yeah, by then it was a 2nd screening for many of us!

May the Force be with You!