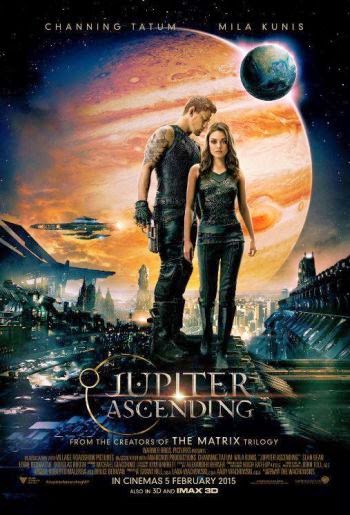 Finally, after having its opening shifted twice, the long anticipated space opera Jupiter Ascending by The Wachowskis (formerly the Wachowski brothers, famed for the Matrix series) will hit the screens on 5 February  2015 in Malaysia. First scheduled for an opening in mid-2014, it was delayed twice in order to allow sufficient time for the addition of over 2000 special effects scenes. Prior to its February opening, it has been screened only once during the 2015 Sundance Film Festival to mixed reviews. In any case , here is the official trailer from Warner Brothers:


The plot of Jupiter Ascending centres around Jupiter Jones (Mila Kunis), a down on her luck janitor eking out a miserable living cleaning toilets in Chicago. Her life meets a drastic change once she is tracked down by a genetically engineered ex-military hunter called Caine (Channing Tatum).

Caine informs her that her genes carry a signature marker that makes her the heir of an ancient Alien dynasty who have been seeding planets for the purpose of creating living creatures that will reach a “Darwinian state of perfection” so that they may be harvested to produce a youth serum that will keep the Dynastic leaders immortal and youthful. When the matriarch of House Abraxas, the most powerful alien dynasty dies, her three children battle to be the next ruler. Foremost of them is Balem Abraxas, the oldest son and main antagonist who will stop at nothing to prevent Jupiter from claiming earth, on which he has set his sights. Balem vows to harvest earth rather than let Jupiter claim it for herself. As Jupiter is drawn into this civil war, the question is, will her efforts to save Earth pay off?

This 2015 TV spot showcases the stunning special effects in the movie’s chase scenes (as well as a very attractive Eddie Redmayne as Balem and Channing Tatum topless):

In any case, the extremely fit Channing Tatum apparently does many of the stunts himself. As this behind the scenes footage shows:

In any case it would be interesting to see both Channing Tatum and Mila Kunis perform in this particular flick as most of their previous films have been in the romance or drama genre (and comedy for Kunis). More importantly, we’re looking forward to the directive geniuses of Andy and Lana Wachowski who are famed for working on the likes of The Matrix trilogy, V for Vendetta and Cloud Atlas. 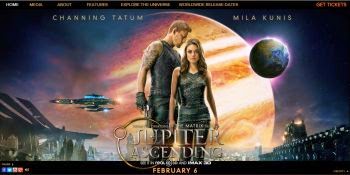 The official website (above) for the movie is a pretty cool place that features interactive flash game and a virtual album of movie concept art under its ‘Features’ section. You can also click ‘Explore the Universe’ for short clips and trivia from the movie. Note that website content could be fairly resource heavy on some browsers.

One of the most interesting aspects of the movie is of course the amazingly lush costume design which can be seen here:


Here is a close-up of the wedding dress Mila Kunis wears, check out the three dimensional flower details and the amount of beads, as well as the elaborate silver steel and flower headdress:

It’s difficult to imagine the amount of work that must have gone into making this dress, considering its ornate details. Nevertheless, we may yet see some cosplay for these costumes when cosplayers take up the challenge.

Many local brands are offering contests that tie in with the movie as surveyed by the Outpost Movie Recon Team (M.R.T.). To start off, Hitz.fm is offering free movie passes to the Premiere screening on February 4th 2015. To win, either call in when the cue is given on air, or fill up a small quiz found on their website here. 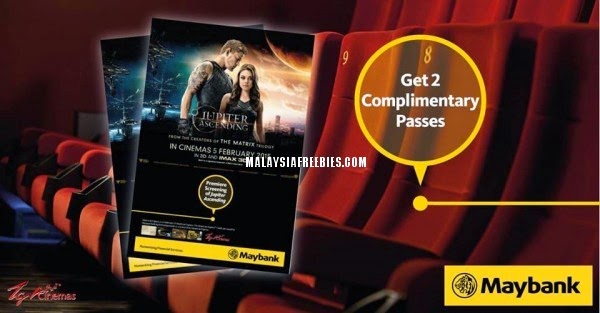 Maybank Credit Card holders shoppping in 1 Utama or KLCC can also claim free passes to the Premiere screenings on February 4th, but the numbers are limited while stocks last or before 2 February 2015. Details can be found here. 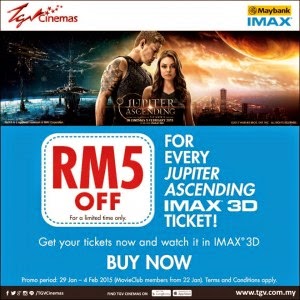 TGV Cinemas is offering discounts on their IMAX 3D movie tickets for Jupiter Ascending until the 4th of February. 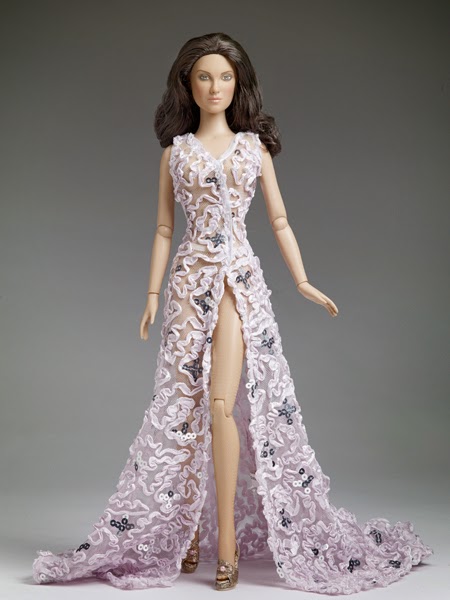 On the other hand, if you are looking for Jupiter Ascending collectibles, the Intercooler website here lists some e-bay sellers that sell figurines and signed posters. The above Tonner Dolls are coming soon in very Limited Edition quantities of only 300 each which will set back Mila Kunis fans over RM1,000. Fan-girls of Channing Tatum may also be delighted to know there is a Caine doll coming up.

Also, if you are into Funko Pop! Vinyl collectible figurines, cutesy Caine Wise, Jupiter Jones and Jupiter the Queen version are available. Unfortunately, none of these goodies have been sighted locally so the only option by may to order online from sites that ship to Malaysia. One such US online retailer is Entertainment Earth, which also carries Pop! Vinyl figures, posters and other knick-knacks.

Disclaimer: Jupiter Ascending and other trademarks are copyright to Warner Bros. Pictures, referenced here for fan service announcements without intent to infringe.
Posted by Outpost Productions No comments: 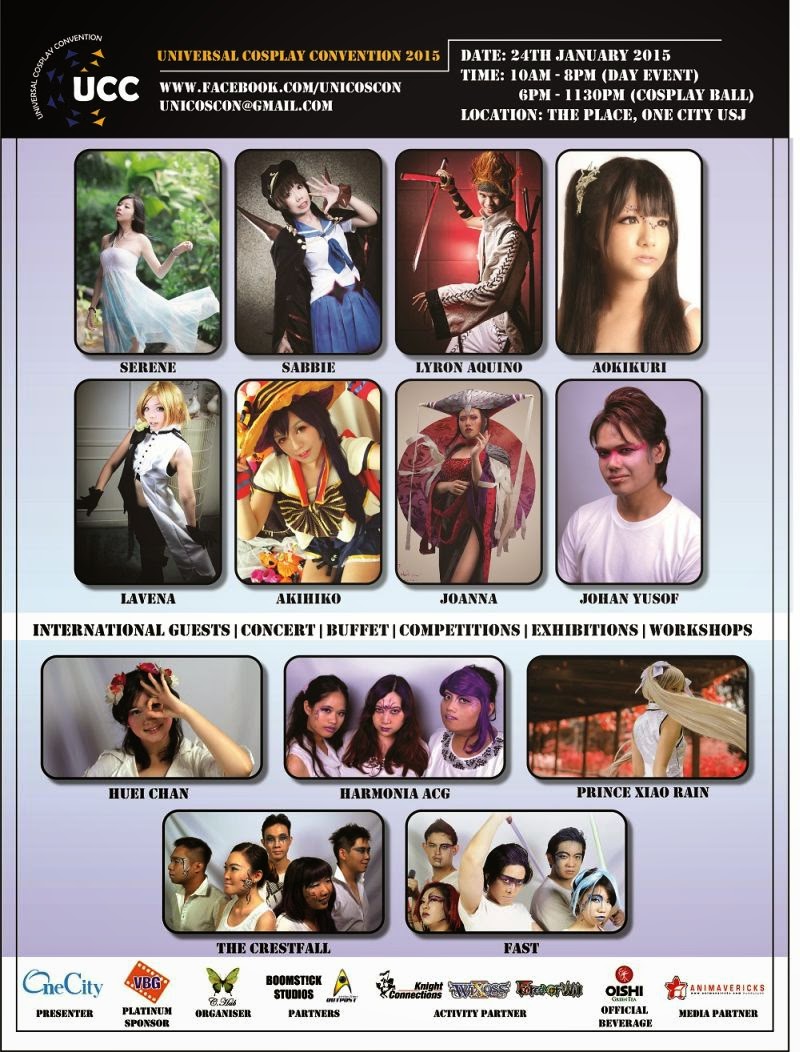 The Cosplay Ball is the brainchild of veteran cosplayer, costume designer, and owner of Costurera Haberdashery (a custom costume design and event management label), Venus Lim. Initially meant to be a private party among friends to usher in the New Year back in 2010, word soon got out amongst the community about how fun it was, and it grew into an open event for cosplayers and public alike. For a nominal fee, attendees are entitled to door gifts,a buffet dinner, activities, lucky draws, and the much anticipated Glow in the Dark Concert. The Glow in The Dark Concert is the highlight and mainstay of Cosplay Ball, and features popular acts from the cosplay scene where everyone sings and dances into the night to welcome in the New Year. The Cosplay Ball has previously been held at Sri Petaling Hotel and Bukit Jalil Golf and Country Club Resort.

UCC 2015 is a daylong event and is divided into Day and Night segments. The Day event is open to the public and entrance is FREE. It will be held from 10am to 8pm and will feature doujin and merchandise booths, snack stalls, and figurines exhibition. There will also be a cosplay runway and singing competitions, with cash prizes and more up for grabs. 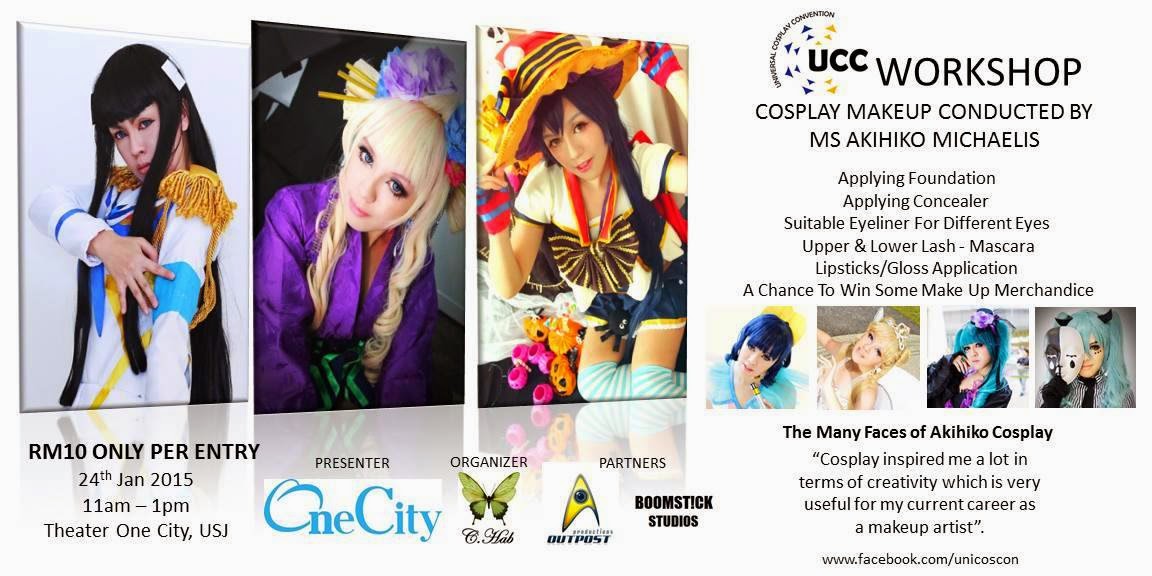 UCC will also be featuring two cosplay workshops; Cosplay makeup workshop will be conducted by Akihiko from Penang, a veteran cosplayer and makeup artist from the North. The propmaking workshop will be conducted by Lyron Aquino, a veteran cosplay from Philippines. Lyron Aquino is one of the international guests that will be featured in this event. Workshop tickets are priced at RM10 each. 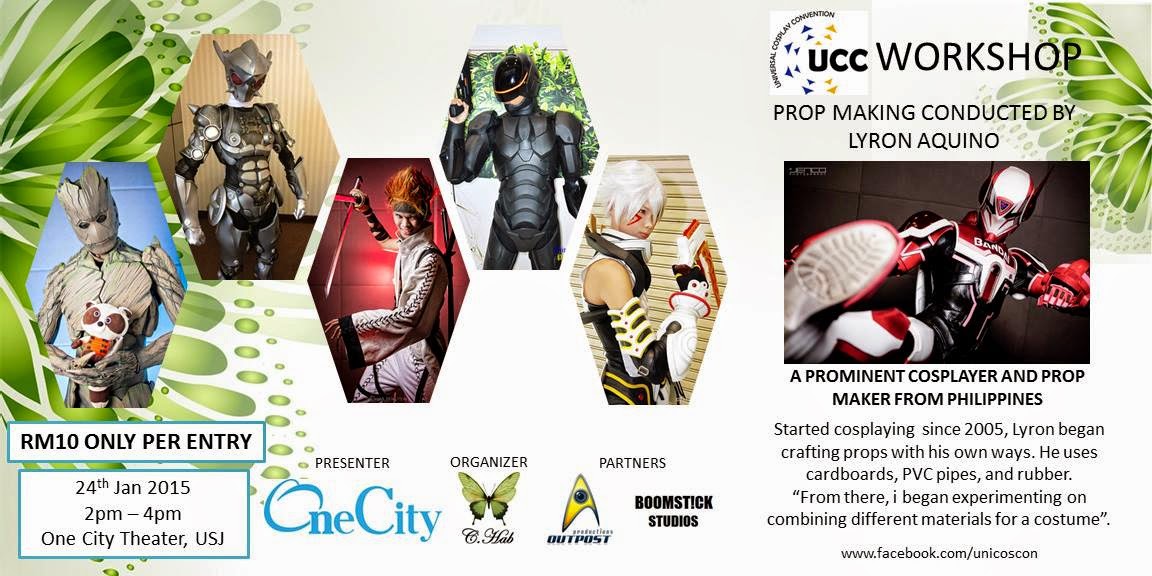 The Cosplay Ball is the Night event and highlight of UCC 2015. A ticket only event (Tickets are available at RM65 or buy two tickets for the special price of RM100), Cosplay Ball starts at 6pm to 11.30pm. This will be the fifth iteration for Cosplay Ball and the biggest one yet. There will be a buffet dinner, Prom King and Queen Award, activities, lucky draws and of course the Glow in The Dark Concert. 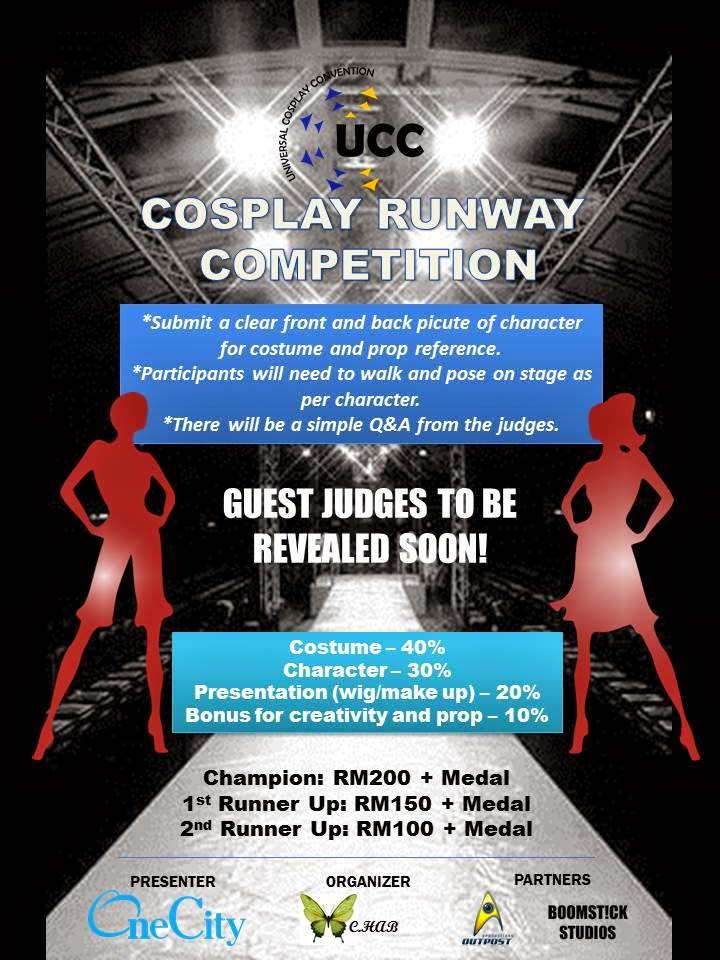 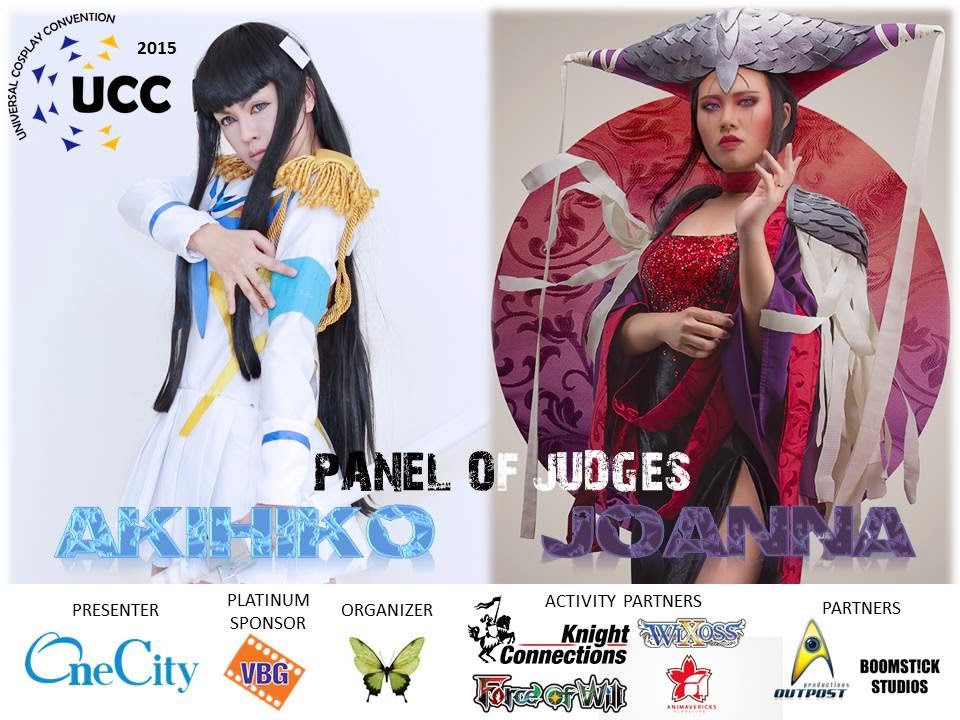 For the first time ever, this years Glow in The Dark Concert will feature a combination of local and international performers such as renowned lightsaber choreography group FAST, rock band The Crestfall, all girl acapella trio Harmonia ACG, up and coming singer Johan Yusof, stage veteran Huei Chan and a special performance from Venus Lim herself. On the international front, Serene and Sabrina, a popular girl duo from Singapore and Aokikuri, former member of JKT48 of Indonesia will grace attendees with singing and dancing performances. 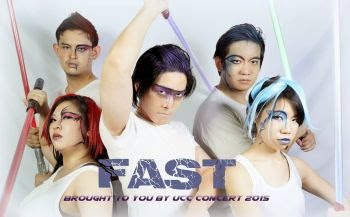 In addition to One City as a Presenter, UCC2015 is also supported by Platinum Sponsor VBG, Partners Outpost Productions and Boomstick Studios, Activity Partner Knight Connections which will be bringing WIXOSS and Force of Will to visitors, Official Beverage Oishi Green Tea, and Media Partner Animavericks.

Here is run-down on the event itinerary: 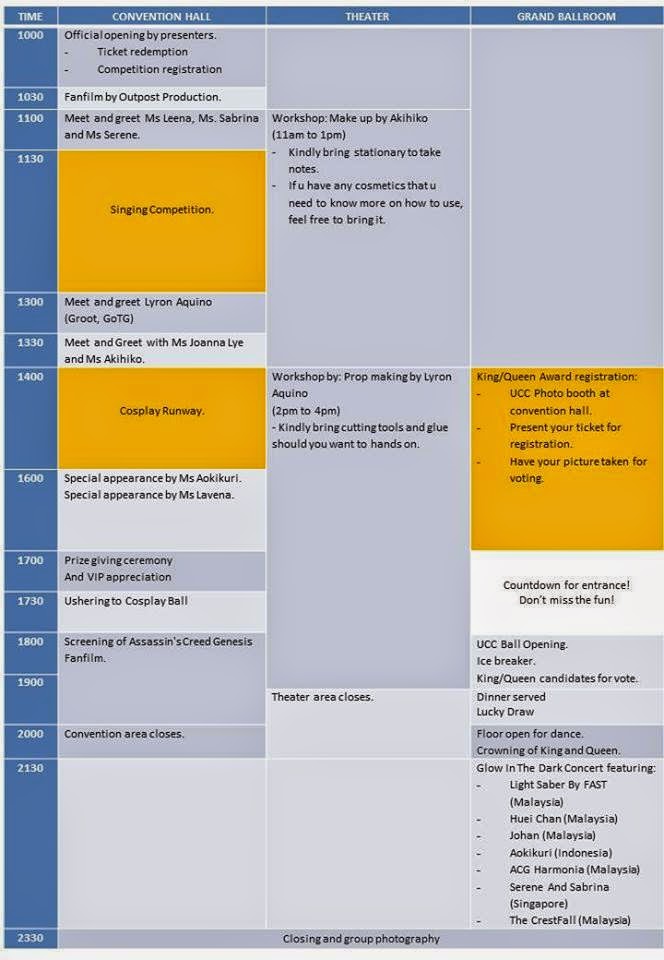 Location at One City USJ: 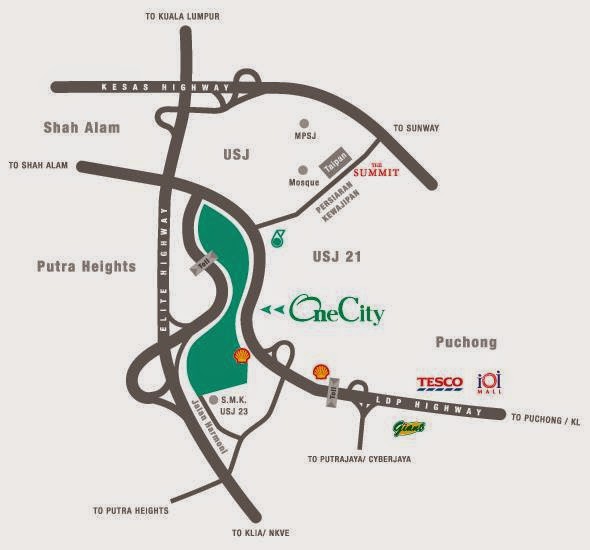 Get the latest updates from the official UCC Facebook Page:
www.facebook.com/unicoscon


Outpost Productions will be present at UCC so come visit us at our booth near the stage.


Also check out the line-up of doujin booths: 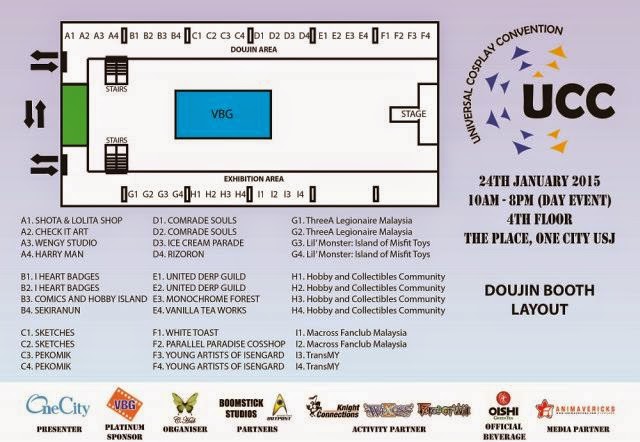