Uncovering the world of James Bond at the International Spy Musuem 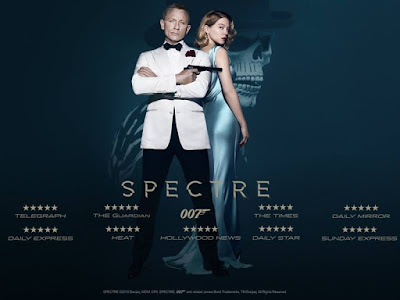 Official synopsis:
A cryptic message from the past sends James Bond (Daniel Craig) on a rogue mission to Mexico City and eventually Rome, where he meets Lucia (Monica Bellucci), the beautiful and forbidden widow of an infamous criminal. Bond infiltrates a secret meeting and uncovers the existence of the sinister organisation known as Spectre. Meanwhile back in London, Max Denbigh (Andrew Scott), the new head of the Centre of National Security, questions Bond's actions and challenges the relevance of MI6 led by M (Ralph Fiennes). Bond covertly enlists Moneypenny (Naomie Harris) and Q (Ben Whishaw) to help him seek out Madeleine Swann (Lea Seydoux), the daughter of his old nemesis Mr White (Jesper Christensen), who may hold the clue to untangling the web of SPECTRE. As the daughter of the assassin, she understands Bond in a way most others cannot. As Bond ventures towards the heart of SPECTRE, he learns a chilling connection between himself and the enemy he seeks, Ernst Stavro Blofeld (Christoph Waltz).

Fans of WWE and Guardians of the Galaxy will be delighted to see Dave Bautista starring as Hinx, Spectre's new uber-henchman.

In the inaugural introduction of Ian Fleming's James Bond during the Cold War era, SPECTRE (Special Executive for Counter-intelligence, Terrorism, Revenge and Extortion) is a fictional global criminal syndicate and terrorist organization led by evil genius and supervillain Ernst Stavro Blofeld; source Wikipedia. The international organization first formally appeared in the novel Thunderball (1961) and in the film Dr. No (1962). SPECTRE is not aligned to any nation or political ideology. SPECTRE began in the novels as a small group of criminals but became a vast international organization with its own SPECTRE Island training base in the films. SPECTRE was last featured in Bond 7, Diamonds are Forever, by Sean Connery in 1971. Now almost half-a-century later in Bond 24, SPECTRE has been rebooted into the digital era and raises interest to compare what aspects will be carried over from the original incarnation.

Following the worldwide success of Bond 23, Skyfall, Sam Mendes returns to direct SPECTRE which controversially cost between US$300-350 million (RM1.3-1.5 billion), making it the most expensive Bond movie to-date and possibly one of the most expensive movies of all time; source: International BusinessTimes. In the age where digital effects are able to deliver expensive “money shots” for less, the producers instead chose to film real shots costing much money and spiralling the movie overbudget, way exceeding Skyfall's reported cost of $200 million. Well the cinematography shows in gorgeous shots of Mexico, Austria, Rome, London and Morocco plus what it looks like to crash and blow-up $24 million of Aston Martin sports cars! Oh and Daniel Craig himself could be responsible for 11-13% of the budget reportedly earning a cool US39 million (RM170 million).

Techinsider has an interesting article on much James Bond's expensive gadgets and suits would cost in the real world. Even at those prices, it boggles how this movie could cost upto US$350 million... that budget alone could possibly rebuilt MI6!

Find out more behind-the-scenes direct from the producers of SPECTRE at the official James Bond website and Facebook Page.

Locally, the Outpost Movie Recon Team (M.R.T.) has snooped out official James Bond merchandise for 007 fans from our 2 mainstay cinema chains. Firstly, GSC Cinemas offers a Spectre Combo for about RM21.00 comprising a regular popcorn and stainless steel cup with the evil organisation's octopus logo. TGV Cinemas is similarly serving its own Limited Edition Spectre Combo with printed foil cup and either hot snacks or popcorn. TGV is also rewarding customers under their Watch & Win Contest with assorted Spectre branded merchandise up for grabs. 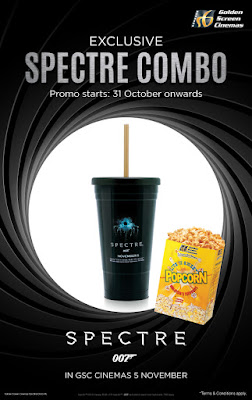 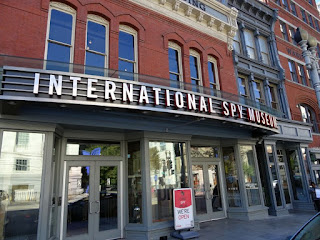 The International Spy Museum comprises 3 levels beginning at the ground floor ticketing lobby with an “Introduction to Espionage” (1): No matter what motives brought you here... leave your preconceptions behind. Learn about the authentice TRADECRAFT that has been used throughout time and around the world. Hear spies, in their own words describe the challenges and the “game” of spying.

A mini-exhibit here “The Americans:Fact & Fiction” peeks into the life of Soviet spies in the United States which inspired the 1980's espionage drama The Americans. There is also a mini-exhibit on “Agent Storm: A Life Inside al Qaeda and the CIA” featuring a glimpse into life of double agent Morten Storm. See more on both at the Spy Museum online exhibits. 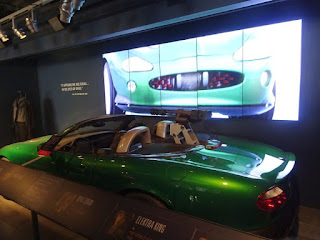 The museum continues on level 3 in the exhibit “Covers & Legends” (2): A spy must live a life of lies. Adopt a COVER IDENTITY and learn why an agent needs one. Proceed directly to the Briefing Film where you'll come face to face with the real world of spying. Spies are motivated for very different reasons – what might motivate you? Patriotism? Money? A compromising situation? Your own ego?

The interactive feature of the museum here offers visitors a sampling of life as a spy. A number of cover identities are shown here where would-be spies memorise basic info essential for working under cover. This really debunks James Bond's effectiveness as a spy since he introduces himself as “Bond, James Bond” in every movie!

The exhibit features items from the real-life CIA mission to rescue U.S. Diplomats during the Iran Hostage Crisis in 1980 of which the 2012 film Argo was based. Read more about this mission at the Spy Museum's online exhibit. 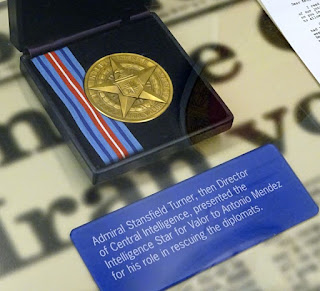 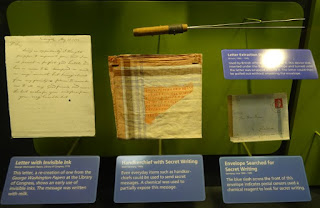 Following a briefing film, visitors are sent into the “School for Spies” (3): What does it take to be a spy? Gather information about innate skills, special training and expertise vital for success. Examine more than 200 spy GADGETS, weapons, bugs, cameras, vehicles, and technologies. Learn the stories behind the SPYCRAFT. Test your skills of observation, analysis, surveillance, and disguise at interactive stations. Do you have what it takes to be a spy? 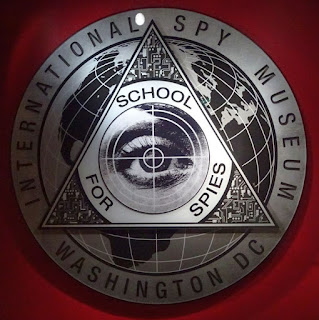 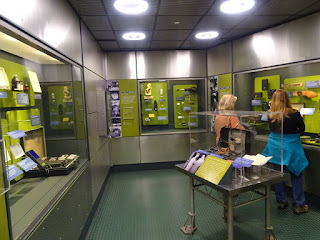 The most curious exhibits showcase real-world spy devices from the last century together with interactive games to test your cover identity and spying skills. Check out these spy devices to photograph and bug targets as well as hidden weapons: 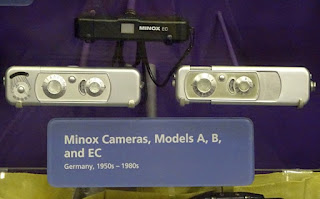 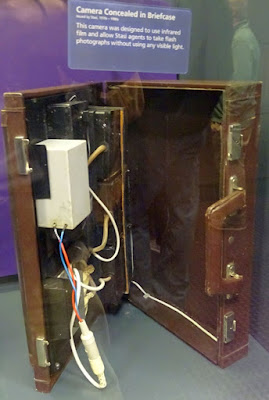 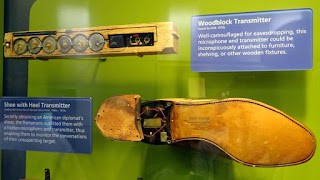 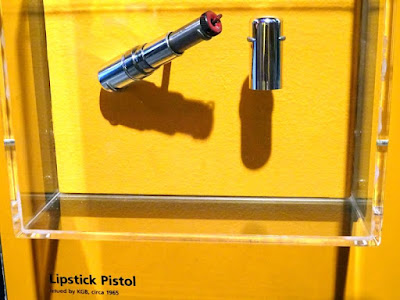 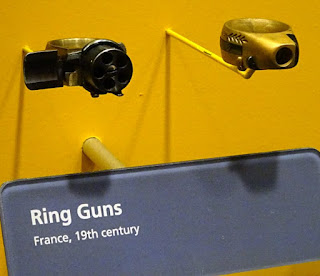 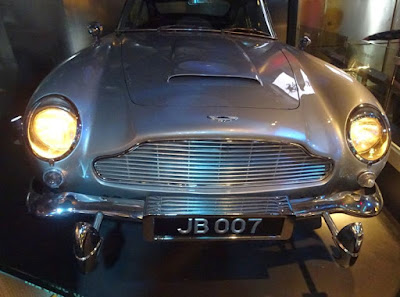 After spy school, the museum reveals “The Secret History of History” (4): Travel back through the centuries to trace the earliest moments of the second oldest profession. Uncover the stories behind famous men and women, considered above suspicion – and doubly effective as spies. Be surprised by SPYMASTERS from Moses to Harriet Tubman, Elizabeth I to George Washington, Cardinal Rechelieu to Joseph Stalin; all relied on intelligence to be effective leaders. Track today's technology back to its sources. Learn abou the earliest CODES – who made and broke them. You know the history. Now you'll know the secret history.

This assortment of exhibits showcase spying over the ages which include Japanese ninjas and use of pigeons during World War I for military surveillance. Other rooms featured spying during the medieval ages to the American Civil War and the Soviet Union's much feared KGB.


Following on to World War II, exhibits unveil “Spies Among Us” (5): See the storm clouds gathering as WW2 draws near and see the fronts that conceal German and Russian SPY RINGS operating right under our noses. Consider the unheeded intelligence that warned of Pearl Harbour. Learn about top-secret code-breaking successes that shortened the war while testing your code-breaking skills. Be amazed by DECEPTIONS that made D-Day a success. Learn about keeping the biggest secret of the 20th century – the atom bomb – and how that secret was lost.

Journeying through the years pre and post WW2, the exhibit highlights how espionage by the Allied forces contributed to victory with profiles by historical spies. It concludes with interpretative deduction on how secret sciences behind the atomic bomb had leaked from the United States to competing nations. 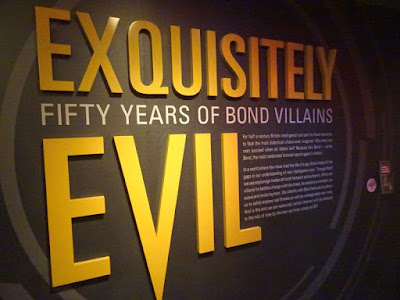 Up next returning to ground level is the 007 exhibit “Exquisitely Evil: 50 years of Bond Villains” (6): Meet Bond's villains, discover their evil schemes, and see their exotic lairs and weapons in this SPECIAL EXHIBIT commemorating the 50th anniversary of the Bond films. See over 100 artifacts from the films – including the Sea Vac drill from Tomorrow Never Dies, Le Chiffre's inhaler from Casino Royale, and a nerve gas sphere from Moonraker – all from the archives of EON Productions, the Bond film producers. Explore how the evildoers and their plots have changed to reflect their times and how James Bond has influenced the public's perception of real espionage.


This exhibit begins with the origins of James Bond by Ian Fleming, a British Naval Intelligence Officer serving during World War II. The exhibit then expands into different eras of Bond villains reflecting issues of the respective times. For instance, the original Spectre haunted the Cold War era (Sean Connery) as an instigator for conflict between superpowers under threat of nuclear weapons of the 1960's.

In the following decade (Roger Moore), Moonraker in 1979 reflected the era of space exploration depicting space shuttle travel before the actual launch of the first space-worthy shuttle Columbia in 1981. James Bond in the 1980's (more Roger Moore, plus Timothy Dalton) then had to deal with drug lords and cold war castoffs. 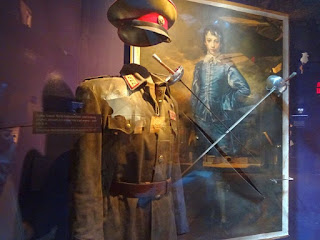 Check out the Spy Museum's online feature of this exhibit for more information on each era of villains.

The final exhibit covers the “21st Century” (7): Confront the contemporary challenges that intelligence faces tday, when it is needed more than ever. On your final stop – Weapons of Mass Disruption – hear from some of today's top experts on the new intelligence battlefield of cyberspace. Explore what would happen if a CYBER ATTACK hit the electrical grid. See the different ways cyberspace has become a battleground for the military, terrorists and spies, and even James Bond. This gallery includes material from 2012's Skyfall, whose brilliant villain Raoul Silva is a cyber-terrorist.

This chamber exposes potential anarchy and chaos in event of the electrical grid failing for prolonged period.

Like all museums in United States, visitors exit into a store offering heaps of merchandise to take home a bit of spy experience. In additional to official Spy Museum souvenirs, there are books by real-life spies and the James Bond movies.

For anyone looking into a career as a spy, it's highly recommended to visit the International Spy Museum to see and mildly experience what you'd be getting into. There's even an add-on Operation Spy immersive 1-hour mission in another country. But for the glamour and excitement seen in 007 movies, better to audition as the next James Bond or Bond girl; there seems to be an opening since Daniel Craig sounds like he's throwing in the towel as the world's most famous super-spy.

For spies who can't head over to Washington D.C., look-up the Spy Museum's official YouTubechannel for loads of informative videos on the world of espionage.

Disclaimer: James Bond and associated trademarks are copyright to EON Productions, referenced here for fan service only without intent to infringe. Exhibits belonging to the International Spy Museum are photographed within Visitor Policies and presented for non-commercial use.