Universal Cosplay Convention 2016 Attracts Dangerous Villains (and Some Heroes Too!)

This year’s Universal Cosplay Convention (UCC)  was held once again at The Place, in One City, Subang from March 5th to 6th 2016. This is the second time UCC is being organized and the first time that it lasted for two days straight. UCC actually grew out of the annual Cosplay Ball event, which was a sit down dinner get-together for cosplayers in the Klang Valley. This is the reason why UCC has always incorporated a Cosplay Ball that takes place after the daytime activities.

The theme this year was ‘Celebrating Villainy’, and with that we expected a lot of villains to show up, with their more heroic counterparts in tow. To be honest, we were not at all disappointed as the selections of both were pretty impressive.

Outpost Productions, which is one of the supporters of UCC, opened a booth this year featuring a selection of new and pre-loved NERF guns for sale, as well as some of its quality costumes, both new and used.  Right in front of the stall, a small obstacle course was set up for visitors to play ‘Eggs on a Spoon’, with a small prize offered for those who successfully completed the challenge.

The event hall was really spacious with a lot of room for visitors to move about, and there was even an area complete with tables and chairs for cosplayers and their friends to rest and hang out. What was even more comforting was the fact that the rest area was positioned in front of small food stall set up by the One City Hotel staff, offering both light snacks like sandwiches to full meals of fried rice with chicken.

The event was livened up with the presence of two guest cosplayers from Japan, namely Mr Tatsumi Inui and Ms Kotori, who conducted the Cure Cosplay Collection competition on Day 2. The competition’s aim was to find the best cosplayers from contestants who were given a chance to parade in their costumes and pose for both guest cosplayers, who were also the judges. Both of them also took some time to give comments on the local Malaysian cosplay scene, and offer some words of advice.

Of course, and event celebrating villainy would not have been complete without selecting the ‘Villain of the year’. Although the preliminary stage was judged in the old fashioned way, the finalist were literally made to battle it out with an actual physical one on one match involving fats suits ( duly provided by us, the happy people at Outpost Productions). The match was fun yet nerve wrecking, as both finalists attempted to knock a plastic water bottle from each others’ heads. The fat suits were a real hit as spectators roared in laughter every time both contestants clashed, since they resembled large mounds of wobbling jelly.

In the end, Danieal Aidid, who was cosplaying the Joker from Batman, emerged victorious and was lifted up in the air by friends and supporters after his win.

The venue saw its fair share of cosplayers, representing a wide variety of genres from western comics and movies, to Japanese anime and games. 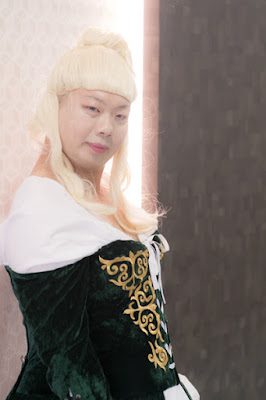 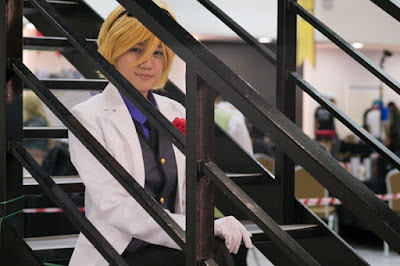 While waiting for the night’s Cosplay Ball to start, visitors were entertained by a variety of fun activities, like a voiceover game, a life sized snakes and ladders game, a dance-off and performances. Some people took the chance to browse around the numerous doujin booths available, and on the upper floor, there was a figurine display by the folks over at the Hobby and Collectible community, as well as the DC Comics Fan Club Asia.


As day turned to night, some of the attendees got ready to attend the annual Cosplay Ball, anticipating a night filled with good food, good friends, good dancing, and even more fun activities! Here’s to another successful UCC, and more to come!