Sonic The Hedgehog Races into Cinemas & Your Hearts this Valentines Day

Back in the nineties...
I was seven years old and shopping with my parents, when I found myself drawn to a television screen in a toy shop, like a moth to light. I was hypnotized by a speedy blue ball that jumps, dodges and whizzes around the screen with incredible speed. I barely blinked when the screen suddenly faded black and the words, SEGA emblazoned across the screen. An emblem titled, SONIC appeared together with a catchy jingle and a blue character popped up. It turned to look at me with a smirk and cheekily beckoned me to press Start. I was sold. I must get a Megadrive NOW! Daaaad!!! (For the record, my parents did not get me a Megadrive until I was older 3 years later.)

Like many fans who grew up with Sonic, he is more than just a childhood hero but a historical turning point that transitioned me from regular kid to geek. When fans learned that Sonic will be getting his own movie, reactions were mixed, to say the least. Video games that turned into movies never had a good rep in the box office. So stakes are definitely riding high especially when its Sonic that we are talking about.

When the first Sonic the Hedgehog teaser trailer was released in 2019, things looked pretty rocky, if not already confirming the worst nightmares of the most ardent Sonic fans. However, more about that in a minute. The movie is now 100% complete and showing in cinemas this week.

If you are not already Sonic fan, here is a guide on the little blue hedgehog, before you speed off to the nearest cinemas.

Sonic the Hedgehog is a video game franchise, pop culture icon and the official mascot of Sega Games Co Limited. He is the brainchild of three Japanese men who formed the Sonic Team in 1991. They are Yuji Naka the team leader and programmer, Naoto Ohshima the character designer and Hirokazu Yasuhara, the game level designer.


(Below) The first Sonic the Hedgehog game released in 1991 for the Sega Genesis and Megadrive. The game successfully sold 15 million copies. 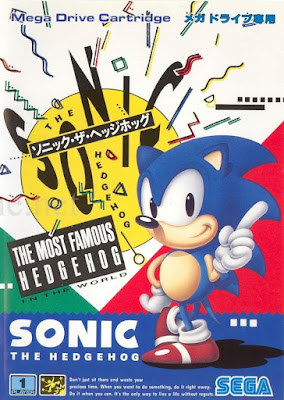 Sonic was created for the sole purpose of competing with Nintendo's juggernaut, Super Mario. He made his debut in American shores as a cool character with spunk, attitude and speed. There was simply no comparison that Sonic was the cool kid that every young and impressionable gamer wanted to hang out with.  So, combining the brilliant design and Sega's aggressive marketing Sonic won the hearts of American gamers and set to established SEGA as a household brand. Sonic's career now boasts of more than sixty different games across platforms and is featured in comic books, cartoons, anime series, apparel, shoes, toys and food.


The main story of Sonic the Hedgehog revolves around Sonic fighting against the mad evil scientist Dr. Ivo Robotnik who threatens to dominate the world using his robotic inventions.  In the Sonic games, Sonic will race through the levels in pursuit of Dr. Robotnik while avoiding obstacles or minion enemies (known as badniks) that lie in his way to stop him. The game culminates at the final boss level with Dr. Robotnik suited up in one of his mega deadly inventions, only to be defeated by the hedgehog, should the player win the game.

There are many iterations to the story but anchors on Sonic who uses his incredible speed to fight for freedom against Dr. Robotnik. In some versions, the fight is seen as a metaphor of nature defending itself against the threat of industrialization.

Now that you know our hedgehog a little better, it's movie time! Here is everything about the movie that you need to know: 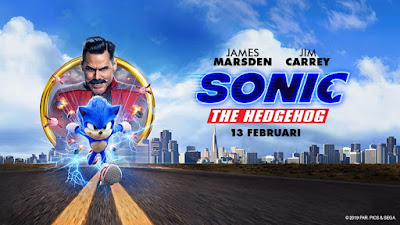 And there were speedbumps...
When the very first Sonic movie trailer was first released on May the 1st last year, it caused a major ruckus for Sonic fans. He looks nothing like the Sonic we grew up with and was disturbing with the realistic rendition that includes a set of creepy human teeth. It was just a sad, sad day for the fans.


Although now the past is behind us, you can still watch the old trailer below and judge it for yourself.

Thankfully, the rallying distressed cries were taken seriously by movie director Jeff Fowler who responded in a Tweet stating that they are fully committed to making the changes necessary to make Sonic look his best.

The result is a new trailer featuring a better looking Sonic that is more cartoonish and closer to the the "modern Sonic" design that fans are familiar with. Jeff delivered what he promised by engaging Sonic's redesigning efforts to Tyson Hesse, who was the artist behind the Archie Comics Sonic and introduction opening scene of the recent 2017 Sonic Mania game.

Check out Tyson Hesse's craft below: 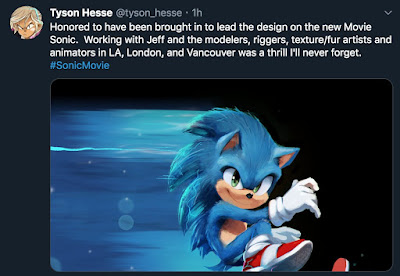 The decision for Sonic's redesign took many by surprise and is well received given that the movie industry is dominated by conglomerate overlords who will simply overrule any form of fan community feedback.  The results truly speak for itself with the new trailer below.

Playing the voice of our hero hedgehog is Ben Schwarzt who has done voice acting roles before including a voice consultant on Star Wars: The Force Awaken for BB-8. Better yet, Ben's a child of the 80s so he'd grew up playing the classic Sonic games citing Sonic the Hedgehog 2 as his favourite.

Based on the global blockbuster videogame franchise from SEGA, Sonic the hedgehog tells the story of the world's speediest hedgehog as he embraces his new home on Earth. In this live-action adventure comedy, Sonic and his new friend Tom (James Marsden) team up to defend the planet from the evil genius Dr Robotnik (Jim Carrey) and his plans for world domination.

The music of Sonic

Addictive and catchy music is the heart of all Sonic games. On YouTube, there are literally hundreds of remixes made by fans for every possible Sonic game out there. Paramount's Sonic the Hedgehog movie has made a tribute to that with an official Sonic tie-in song called Speed Me Up, by Wiz Khalifa, Ty Dolla $ign, Lil Yachty and Sueco the Child.


There are some of Sonic movie goodies and freebies for grabs from our local cinemas. The movie officially screens from 13 February but there are still competitions open for those who don't want to feel left out.

TGV Cinemas has put together a special Family Friendly Special Screening with Sonic, complete with fun activities and goodie bags for the little ones. MovieClub Members are entitled to RM5 off for tickets!  So mark your calendars  this weekend 15& 16 February 2020 and bring your little ones along. Get more information and tickets to TGV's special Family Friendly Screening here. TGV MovieClub members also stand a chance to win official Sonic the Hedgehog movie merchandise through their Facebook Page contest (ending 20 February). 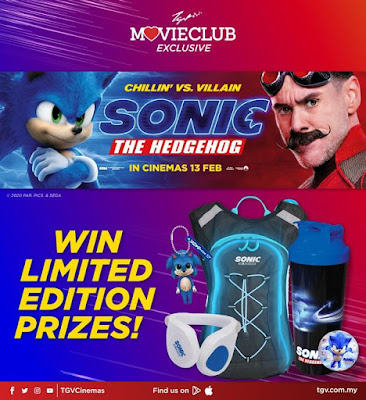 UIP Malaysia & LFS Cinemas are offering some exclusive Sonic the Hedgehog movie merchandise that only a fan can drool at. Competition goes on until the 19 February. So try your luck by checking out the LFS Facebook page.

Sonic Merchandises Galore
If you want a piece of Sonic to bring home with you, drop by H&M for some cool Sonic designed shirts!
H&M has some of the best designs I've ever seen especially the black Sonic shirt with the pixel sprite Sonic running on the sleeves. While the male side has more variety, ladies need not be disappointed. For the girls, there's a white hoodie featuring the original pairing, Sonic and Tails, and bonus! There's Amy Rose the Hedgehog! Classic Sonic fans will recognise this design of Amy from the Sonic CD game where she made her debut in 1993.


If that's not enough to whet your appetites, H&M also has a contest for the hardcore fans. Just purchase any Sonic item from the store, scan the QR code, and tell them why you want to win. It's that easy! Find out how at H&M here Facebook page.

I attended the Movie Premiere at TGV 1 Utama all dressed up like a Sonic Super Fan (wig, ears, gloves, the works) and was genuinely excited.  I chucked all my Sonic baggage out of the door and was anticipating a good ride. Fair to say that I was pleasantly entertained and had my moments of fan glee whenever a cleverly inserted Sonic easter egg pop up in the movie. It's a feel-good movie where both non-fans and fans alike can enjoy.

Well for fans, it really depends on how anal you are as a Sonic fan. But for me, taking the movie as it is, I find it unexpectedly delightful and charming. I particularly enjoyed the new Sonic design and his mix of attitude and screen personality truly shine. I am somewhat uncertain with Dr. Ivo Robotnik and Jim Carrey's interpretation of the evil scientist. In classic Jim Carrey style, he's put an original twist on the villain in ways I could not possibly imagine as a Sonic fan which is not necessarily a bad thing. James Marsden as Tom the sheriff is likeable throughout and the chemistry between him and the hedgehog adorable.

I will recommend anyone to watch Sonic if you are in for something lighthearted, heartwarming and not too heavy in plot or action. It is a character-driven movie that focuses on establishing Sonic as a solid and relatable character that is not all about attitude but heart as well. The writers definitely know their direction with the hedgehog and his potential to push boundaries beyond the point of no return.

A quick reminder, to stay during the movie credits!


Check out other reviews by The Verge, and IGN. Sonic The Hedgehog is now showing in Malaysian cinemas nationwide.

Disclaimer: Sonic the Hedgehog and associated trademarks are copyright to Sega, referenced here for fan service purposes only without intent to infringe.
Posted by Outpost Events & Services No comments: