The Avengers Re-Assemble to Disassemble Ultron 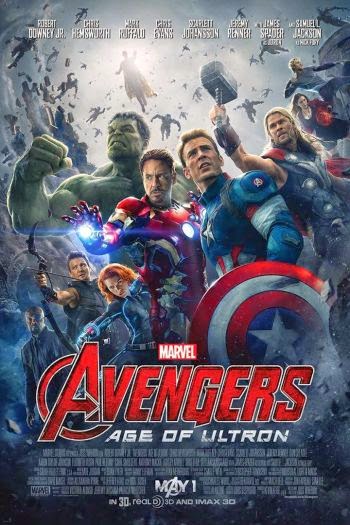 Yes, people, they are back with more of your favourite action scenes adapted from the beloved Marvel series. The second of the Marvel’s Avenger series is called Age of Ultron. Apparently from the title itself, you can tell that there is a whole new villain that will bring even more challengers for our interestingly dressed heroes. This time however, the problems they face are of their own doing, or rather of Tony Starks’ doing. However, more on that later.

In the meantime, we should welcome back the ensemble cast that thrilled fans in the first instalment of Marvel’s Avengers. First we have Robert Downey Jr as Iron Man, Aussie Chris Hemsworth as Thor, Mark Ruffalo as the Hulk, Chris Evans as Captain America, Scarlett Johansson as Black Widow and Jeremy Renner as Hawkeye. Of course we cannot forget the very important Samuel L. Jackson who reprises his role as Nick Fury, former director of S.H.I.E.L.D. and mentor to the Avengers.

There are several trailers released and watching them all really gives you an impression of how grand a scale this production is, from sweeping panoramic shots to high octane CGI action sequences. The plot this time around centres on a program Tony Stark/Ironman had worked on, called Ultron, using an artificial intelligence technology leftover from the alien antagonists of the first movie, the Chitauri. The technology was supposedly altered to be a peace keeping program to save earth from any further invasion. However, when Ultron is awoken, it takes on a life of its own and decides that peace can only be achieved if the entire human race is eliminated. Now that escalated quickly!

Ultron then recruits newcomers, twins Wanda and Pietro Maximoff (played by Elizabeth Olsen and Aaron Taylor-Johnson respectively) to aid his dastardly plan. The twins, who are also imbued with special powers, are also known as the Scarlet Witch and Quicksilver. They are apparently the product of Baron Struckner’s experiments and get their powers from an unknown source. Along the way, the Avengers also encounter a new character called the Vision (Paul Bettany), created by Ultron himself, whose intentions are unclear and is rather mysterious. Additionally, James Spader provides the menacing and slightly sleazy voice of Ultron. Another highlight of the movie is the new gigantic Hulkbuster armour operated by Iron Man, which you can see in this trailer fighting the Hulk:

The scene everyone's been waiting for: Iron Man Hulkbuster vs. Hulk

In order to quell your excitement before the movie actually launches, do check out Marvel’sofficial Avengers website for a tonne of great gallery pictures, wallpapers etc. Be sure you have your speakers at a minimum though, the background music can be quite intimidating.

On the local scene, there is an Avengers Age of Ultron exhibit at Mid Valley’s Centre Court until April 19th 2015. The highlight of the event is surely the giant live size replicas of the Hulk and Hulkbuster, which is a favourite with the crowd.


There are extensive displays of Hot Toys replica collectible figures of Marvel Cinematic Universe characters from the upcoming movie as well as the previous Avengers. Hasbro features their official movie toy products with retail sales available at the adjacent concourse as well as most major toy stores and major retailers. Avengers branded tshirts, stationeries and other official products are also available.

Apart from these eye-candy, there are booths for you to take photos, play games and even wrestle a replica of Hulk’s arm. Succeed in a few "Avenger" activities and receive some free goodies.

The Outpost Movie Recon Team (M.R.T.) has found more ways to engage your inner geek from the following movie promos. MixFM in conjunction with Walt Disney Motion Pictures Malaysia is giving away free passes for the film if you answer a couple of quiz questions and complete a short slogan, so give it a try and you may be the lucky winners. 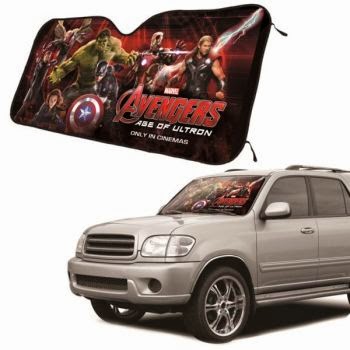 Popular automotive website PaulTan.org is organizing a Driven movie night and in addition to being able to win free passes to watch the movie on April 22nd, you can win a slew of movie merchandise from car decals, T-shirts, USBs, water bottles, sunscreens and many more. A similar contest where you can win passes and merchandise is available at LowYat.com. 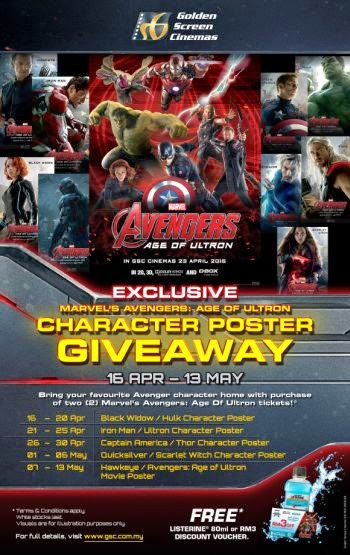 Local cinema chain GSC Cinemas has started the promo ball rolling by offering free poster giveaways for any purchase of two Avengers: Age of Ultron tickets starting 16 April to 13 May, with different posters up for grabs each week. Additionally, selected GSC outlets are offering a special combo of snacks and a limited edition box of Avenger key chains for only RM60.00. 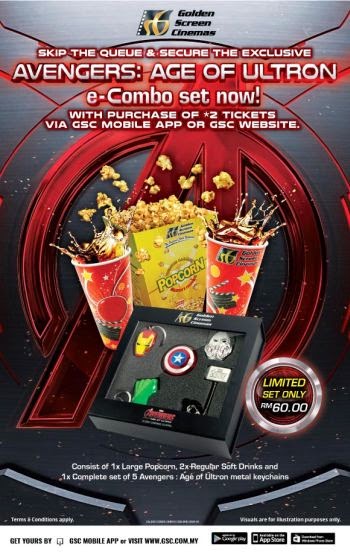 On the other hand, TGV Cinemas are offering a combo promo at their concessions counter where you can buy a hexagon collectible mini figurine with your popcorn and drinks for only RM19.90. Beginning 16 April, you can purchase these cutesy little figures with The Hulk and Thor released first, whilst Iron Man and Captain America will be on sale beginning 23 April. Keep in mind these are limited edition so get them while stocks last.


MBO Cinemas has a similar promo whereby you can get an Avenger figurine cup with a topper that carries a figurine of your favourite Avengers character. The combo is inclusive of popcorn and a soft drink, all for only RM17. 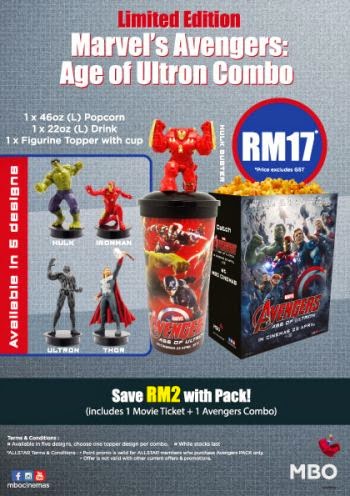 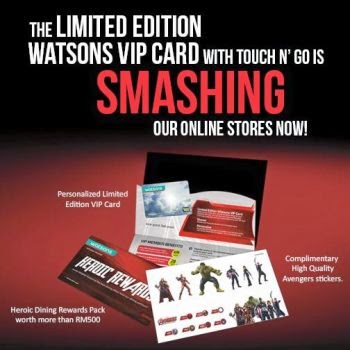 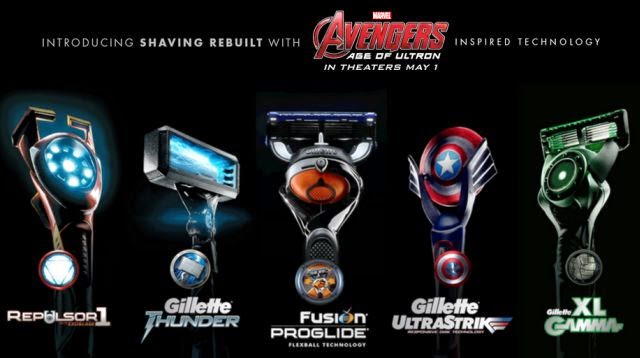 By the way, good luck finding the Repulsor1, Thunder, Ultrastrike & XL Gamma models on our shores. They might only be found in Avengers Tower! LOL!


For "superfans", TGV Cinemas is throwing a Superhero Bash on Saturday 25 April at The Ballroom in Jaya Shopping Centre. Activities from 5pm include drawing / colouring contests, games, best dressed awards and more. Find out more and register online at TGV's website.

Coincidentally that same afternoon, GSC Cinemas is holding a free screening of Avengers Age of Ultron in Dolby Atmos at their 1 Utama cineplex. To qualify, participants need to watch a video and post photo of themselves in costume on this Facebook post by 22 April 2015. 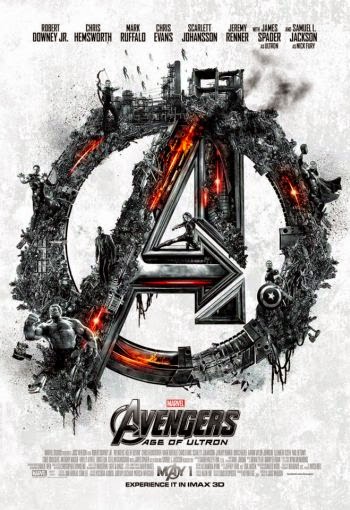 Marvel's Avengers Age of Ultron will assemble in cinemas 23 April 2015.

Disclaimer: Avengers and other trademarks are copyright to Marvel Entertainment and/or Walt Disney Pictures, and their respective owners, referenced here for fan service announcements without intent to infringe.
Posted by Outpost Productions No comments: 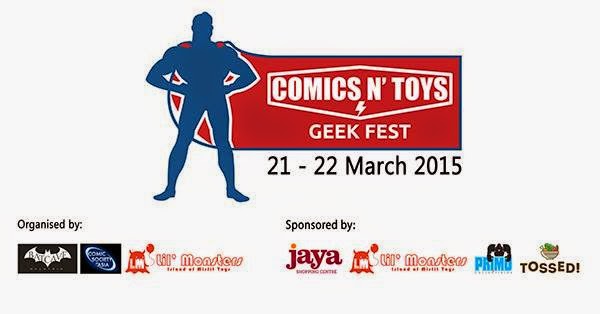 The Comic N’ Toys Geek Fest (CTGF) was held recently on the 21st and 22nd of March 2015, which fell on a Saturday and Sunday respectively. This particular event was targeted mainly at fans of western comics and series like all the beloved Marvel and DC characters. It was also a chance for local comic artists and other related art doyens to showcase their craft. The brains behind this event were the people at Lil’ Monsters, Batcave Malaysia and the Comic Society of Asia, who pooled their resources together and pulled off this extremely successful gathering.
Among the highlights of the event was a comic panel, a workshop on toy customization and a cosplay competition. Also present was guest cosplayer Liui Aquino from the Philippines, who had his fans in a frenzy during the fan activity session on the first day.
Apart from the stage activities, there were plenty of artist booths to browse and shop at. While walking around, I had the opportunity to meet and talk to Edvinder Singh who was there to sell prints from a series he’s working on called Children of Ga’ia, which is inspire by Vedic Scripture. His artwork was very detailed and vibrantly coloured. When asked about the storyline of Children of Ga’ia, Edvinder said that it was about a battle between good and evil, but more importantly how good and evil are actually complex and difficult to define, giving rise to a grey area that the characters have to struggle with. He and his writer partner Meninder Aujla have planned five volumes and we wish him all the best.
Another interesting booth belonged to some representatives from MY Comic Community who were selling their latest collaborative effort called Garaj Komik, which is a fanzine featuring several standalone stories. A total of four artists contribute to these stories in mixed degrees, giving the fanzine a very Indie and raw feel.
Geekdom gatherings are never complete without the presence of cosplayers and CTGF was awash with characters from various comic books and movies. We spotted a group of Avengers mingling with the crowd and posing for photos with curious onlookers and avid fans. They also took some time out to goof around with one another. Apparently all that saving the world business is rather stressful and there’s nothing like a day out with the gang to cure the mental anguish.
Of course we musn’t forgot the entire bunch of people from the Batman franchise, one of which was Ezard Bob Zuhaili, who did a perfect rendition of the Penguin, complete with slow shuffling movements and a walking stick.
Of course everyone at the event was looking forward to the cosplay competition themed "Marvel vs. DC" with many gathering around the stage area to watch. It has to be noted that one of the judges was Liui Aquino, a professional cosplayer from the Philippines who was a guest at this event. There were many fangirls (and fanboys) crowding around him for a chance to get a picture in his Nightwing costume.
As the cosplay competition went underway, it was obvious the crowd was excited and took every opportunity to interact with the contestants who were equally creative, injecting in witty banter with the host, Andrew and acrobatic moves (for some). In the end, the first place went to the affable Louis Megami as Spider-man, who won the hearts of spectators by engaging with the crowd and being such a great sport when questioned by the judges. The twenty two year old, who has been cosplaying since 2011, was very humbled by the win when I met him afterward.
Later on after the excitement had wound down, I went to check out more figurines that were on display. A large collection came from the Comic Society of Asia, headed by David L., who was at the booth recruiting for the group as well as trying to raise awareness of western made figurine collection. 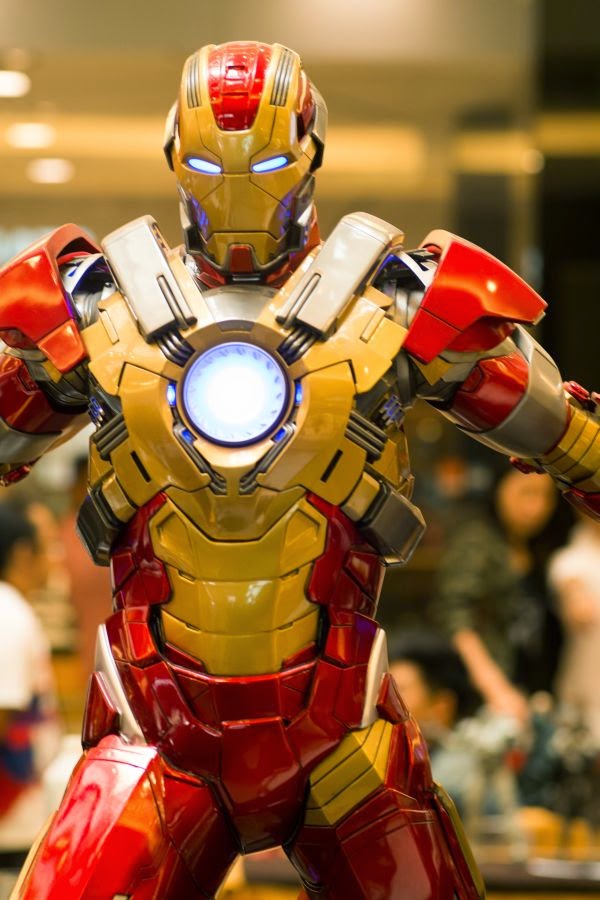 Another highlight during the event was a sculpting demonstration by Mufizal Mokhtar which was both educational and entertaining. However since his booth was small and the crowd was thick, I only managed to catch snippets of it on an extension screen. Impressively he managed to make a full figurine of Hang Tuah (or is it Jebat?) in just over 20 minutes.
The final bunch of people I spoke to were from MyLARP, the Malaysian LARP community promoting the first ever LARP event in Malaysia on 29th to 31st of August this year. However, Sacha, who heads the group says that plans are still ongoing and they’re targeting about 60-100 players.
Some crazy-ness expected from cosplayers at cons!
Finally, a big Thank You is in order for the organizers who have worked so hard and pulled off a successful maiden event which was relaxed and informative. Here’s hoping for more action in the future. Check out more photos of the event at the Comic & Toys Geek Fest photo album on Facebook.
Fans of Western Pop Culture who would be interested to attend international conventions like Supanova Australia, Dragon Con Atlanta USA, New York Comic Con and more stay tuned to Away Missions being organised by Outpost Expeditions. 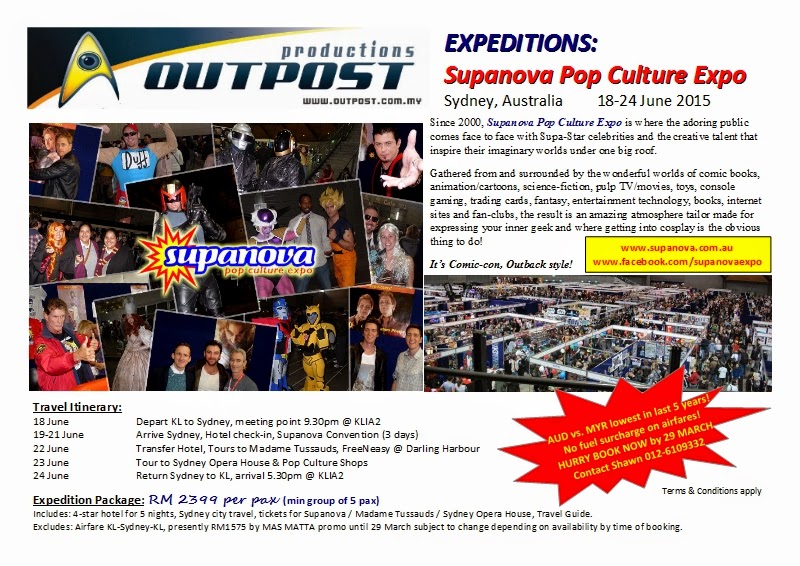 Disclaimer: This blog post is written for fan engagement only. All referenced trademarks remain copyright to their respective owners.