Game of Thrones: Now that Winter is finally here, the Game for the Throne is coming to an End 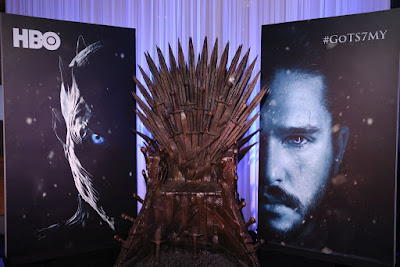 Finally after 6 seasons of 60 episodes since 2011, Winter has finally come to Westeros. Granted in George R. R. Martin's fantasy world, seasons can last for years. And despite record viewership and Emmy awards, the storyline for A Song of Fire and Ice is set to conclude over a final 13 episodes, of which 7 comprising season 7 has started airing last week on 17 July (or 16 July US time). Season 8's last 6 episodes will be in 2018 or 2019 (of the wait!).


As a treat for Malaysian fans celebrating the release of Season 7, HBO Asia and Astro held a Game of Thrones event in the popular Sunway Pyramid Shopping Mall early this month. The key exhibit comprised a Pencil Micro-sculpture Exhibition by Russian scuptor Salavat Fidai. His art pieces are formed out of the graphite in pencils, or more commonly called pencil lead (although there is in fact no lead in pencils!).


Try to imagine how small these sculptors would be considering the slim graphite shaft encased in length of pencil wood. Yes, so small that the term micro is aptly appropriate and require magnifying glass to see the thematic details from Game of Thrones that Salavat Fidai has sculpted into 16 pencil art pieces. These include House sigils, the Iron Throne, the 3-eyed Raven, and more.


For a better close-up look at these sculptors than could be captured by our cameras, check out articles by The Hive Asia And Says.com.

Of course no Game of Thrones event would be complete without the Iron Throne, and there is was open for fans to be King of Westeros for a minute and take home a souvenir photo.


There were also various activities for event guests to be challenged for a chance to win Game of Thrones souvenirs. Eager fans would have to visit 6 stations at the event concourse and receive a stamp for participation. This included an archery range (Ygirtte's Challenge), a hand coordination exercise (Journey to the Throne), visiting various Astro counters, and posting self-photo on social media.


Now that Winter is Here, beware the danger form the north. Indeed a pair of White Walkers appeared periodically but were less icy than expected, perhaps since Malaysia is always Summer!

Game of Thrones Season 7 finally Premiered on Monday 17 July, 9am Malaysian time (16 July, 9pm US time. For true fans in Malaysia, HBO Asia hosted a Premiere Episode Viewing Party in TGV Cinemas that night. Thanks to a last minute invite from Sunway Pyramid, I got to join in on the festivities with fellow.... er, Thronies (Game of Thrones fans).

Hosted in the Chillax lounge of the cinema, we were offered food worthy of a King's feast (always good in any event!). Everyone got their chance to be Kings and Queens on the Iron Throne for photo opportunities together with cosplayers of Daenerys Targaryen and Petyr "Littlefinger" Baelish.


Thronies with a Maester's knowledge of Westeros and Essos were rewarded with official Game of Thrones merchandise from Trivia Quiz hosted by Malaysian TV persona Daphne Iking.


Counting down to the Season Premiere screening, we were all ushered into the cinema hall and shown a recap of the Season 6 finale "The Winds of  Winter". The recap was well worth it as this season finale ended on such a high-note to really fuel the enthusiasm for Season 7, which had been eagerly awaited for over a year.

The Season 7 episode opening credits with Ramin Djawadi's iconic score were greeted with a collective cheer. "Dragonstone" kicked off with a masterful opening act continuing Arya Stark's journey and soliciting much applause from fans. The episode then visits all the remaining players that matter in the Game of Thrones. If you have yet to watch this episode, get to it NOW via Astro On Demand or Astro Go. If you have watched the episode already, it's still worthwhile to read-up on any of the online recaps to check that you haven't overlooked some detail in this expansive fantasy political world. Here's recap by EW.


After the screening, another round of Trivia Quiz too place with Game of Thrones jacket, Funko POP and Monopoly set being given away. Thronies coming to the event in costume were then lined up for the camera and winners chosen to receive digital gadgets worth some significant nuggets of gold.

No one left empty-handed either as all guests received a HBO goodie bag filled with Game of Thrones stationery, window stickers, cap and badges of the 3 remaining houses vying for the Iron Throne.

Game of Thrones now airs locally same time as US exclusively on HBO (Astro Ch 411/431) every Monday at 9am with repeats at 9pm. The series will also be streaming on On Demand and Astro GO.


Converse with fellow Malaysian Thronies on the Facebook at Malaysia Game of Thrones Fan Group and follow HBO Asia for such future events. For the latest behind-the-scenes news check out the official Making Game of Thrones blog.


Disclaimer: Game of Thrones and other trademarks are copyright George R. R. Martin and/or HBO, referenced here for fan service engagements without intent to infringe.