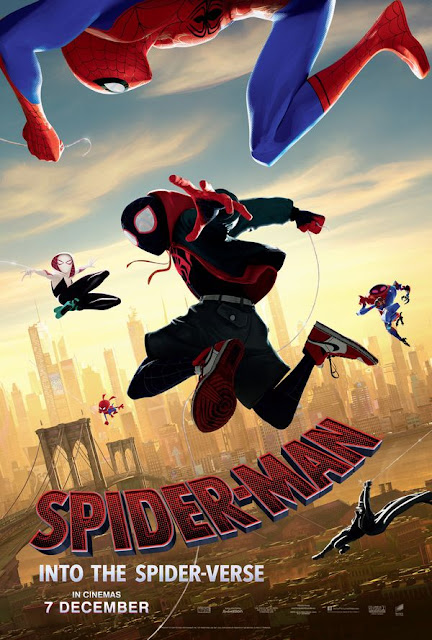 From the animation studio that brought The Smurfs to cinemas as well as cutesy monsters of Hotel Transylvania, Sony Pictures Animations now bring Marvel's friendly neighbourhood wall-crawler in animated form to cinemas with Spider-man: Into the Spider-Verse. As movie goers may be aware, Sony Pictures currently holds the rights of Spider-man on film since Y2K and has produced six live-action movies to-date which ranks at the 10th highest grossing film franchise of all time at over USD4.8 billion. With such a lucrative property, Sony retains a super-strength grip onto the Spidey film rights and which includes associated Marvel characters such as Venom, Morbius, Black Cat, Kraven, etc. This Sony Universe of Marvel Characters (SUMC) has already paid off gruesomely in the standalone movie Venom released this October and ranking in over USD845 million worldwide.

Since the 1970's, live-action films of Spider-man has featured Peter Parker as their main protagonist, being the secret identify of the namesake superhero. The current Peter Parker is portrayed by Tom Holland and, through mutually profiting agreements with Marvel Studios, has been incorporated into the massively successful Marvel Cinematic Universe (MCU) film franchise since 2016's Captain America: Civil War. So with Peter Parker temporarily exported from the live-action SUMC, here comes Spider-Man: Into the Spider-Verse introducing Mile Morales as the new lead protagonist in the namesake role.

Official movie synopsis:
Phil Lord and Christopher Miller, the creative minds behind The Lego Movie and 21 Jump Street, bring their unique talents to a fresh vision of a different Spider-Man Universe, with a groundbreaking visual style that’s the first of its kind. Spider-Man™: Into the Spider-Verse introduces Brooklyn teen Miles Morales, and the limitless possibilities of the Spider-Verse, where more than one can wear the mask.

Let's take a closer look into the different Spider-man of the Spider-Verse: 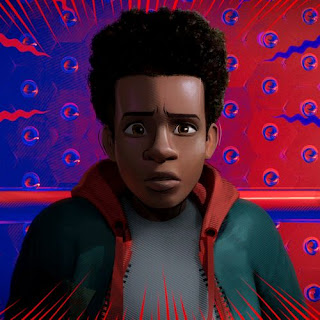 MILES MORALES – The all-new Spider-Man
Miles Morales is a young teenager and a Brooklyn native. He’s a bright kid who’s been thrust into a new school and is having a hard time adjusting to a more rigorous academic environment. But he’s having an even harder time adjusting to his entirely new and unexpected life as a Spider-Man.  With the help of some surprising new friends, Miles learns to unlock the hero inside himself. 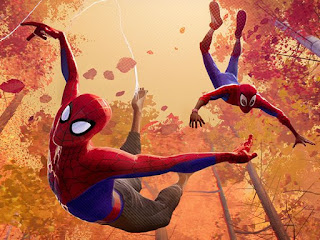 PETER B. PARKER – Miles’ reluctant mentor
He may look like Peter Parker, but he is older and the years of superhero life have taken a toll on his body. His experiences have left him world-weary and cynical. Peter never wanted to be a mentor, but training Miles Morales to be Spider-Man helps him to regain his original enthusiasm for that identity and reclaim the spirit of selflessness for which Spider-Man stands 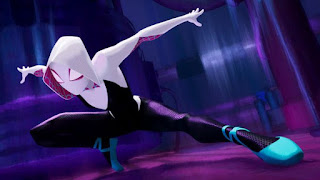 SPIDER-GWEN – A super-cool Spider-Woman
An intelligent and quick-witted teenager, Spider-Gwen is the Spider-Woman of her world, an excellent fighter who can swing and flip with the grace of a trained dancer. Although tough and brave when she’s fighting the bad guys, Gwen has suffered a loss in her universe that’s made her afraid to get close to people, even to an open-hearted kid like Miles. Once she learns there are others like her, she has the opportunity to let down her guard and become part of a team who have overcome their own tragedies to become the protectors of their worlds. 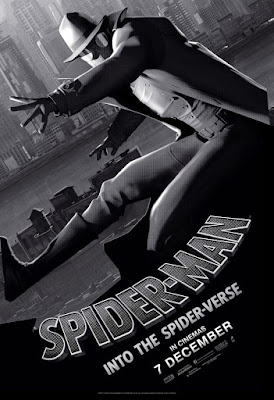 SPIDER-MAN NOIR – The Spider-Man of 1933
Spider-Man Noir, a Peter Parker from another century as well as another universe, is a more hardened version of Spider-Man who fought crime during the Great Depression in 1933. Unlike most Spider-People, Spider-Man Noir is only seen in black and white and has the 1930s perspective to match, which makes it harder for him to adjust to Miles’ modern (and colorful) world. 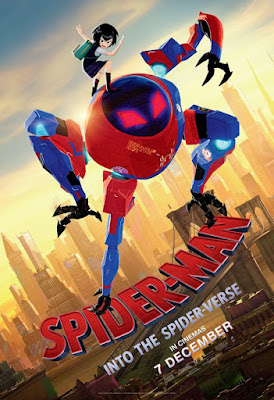 PENI PARKER and SP//dr – A half-Asian school girl from the future
Peni Parker is a classic anime character, a school girl from an alternative universe with a psychic link to a spider. She’s an emotional, expressive vigilante who doesn’t wear the typical Spider-Man suit – instead, she has a mechanical, robotic Spidey suit that only responds to her DNA.


SPIDER-HAM – The comic relief
Meet Spider-Ham, aka Peter Porker… a cartoon pig! Spider-Ham is always the first one to crack a joke, but despite behaving like the ultimate ham, he takes his job as a Spider-Hero very seriously and fights alongside the others with own his special kind of cartoon fury. 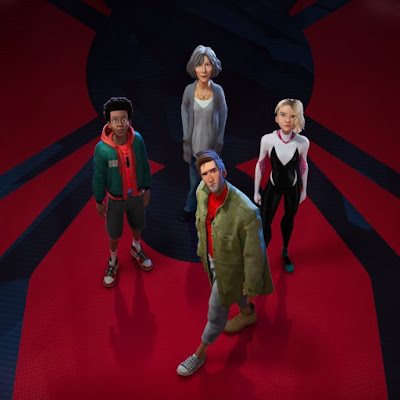 AUNT MAY - A Pillar for all Spider-People
Aunt May has been very involved in her nephew's Spider-Man world, creating gadgets and providing tactical support for his superhero adventures. When May learns that there are Spider-People from other universes who need her help, she’s ready to provide coffee and web-shooters. She even wields a baseball bat to fight along side them when the villains arrive.


WILSON FISK aka KINGPIN – The ultimate crime lord
Kingpin is the king of organized crime in New York. His climb to the heights of power has been built on decades of shady deals and ruthless violence, backed by an almost superhuman will. Kingpin blames Spider-Man for a loss so great that he is willing to risk the lives of every person in every universe to get back what he lost.

The real thrill for Marvel fans would be to see this team-up amongst the different Spider-heroes. The animation style is very much inspired by its comic book origins, chock full of visual delights and “easter eggs” aplenty including the world's most famous cameo actor in animated form. But as aesthetically pleasing as a movie may look, it's core story must resound with the audience and this one most certainly strikes home.

Spider-Man: Into the Spider-Verse has received raving reviews and even scored a perfect 100% by Rotten Tomatoes. Here's how it compared against the preceding live-action movies by Sony on the Tomatometer: 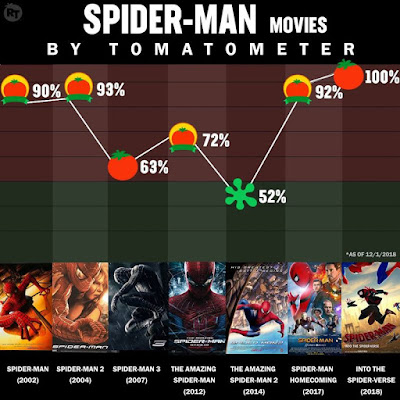 Even before it's US release, the movie already been nominated in the Golden Globe Awards for Best Motion Picture – Animated, up against The Incredibles 2 and Ralph Breaks the Internet. 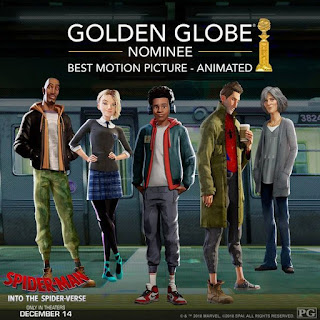 For more in-depth review, read what Star2.com has to say or watch opinion video by IGN:


Malaysia's Movie Premiere for Spider-Man: Into the Spider-Verse was held on 4 December 2018 at TGV 1 Utama and attended by our very local-verse of Spider-heroes:

Once again, the Outpost Movie Recon Team (M.R.T.) has compiled the following intel of Spider-Verse promos from our local cinemas. Starting with TGV Cinemas, customers purchasing at least two tickets will be able to redeem a limited edition Spider-man phone ring (while stocks last). Find out participating cinemas and terms & conditions from TGV's website. 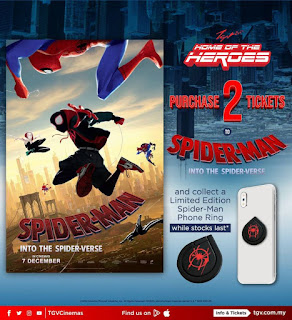 Furthermore, customers with minimum of three tickets may join TGV's Facebook contest for the chance to win movie premiums including a limited edition Spider-man PS4 Pro console as Grand Prize. Goto the contest post to participate and check terms & conditions at their website (ends 16 December 2018). 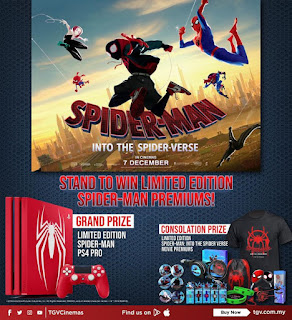 GSC Cinemas has similar movie premiums up for grabs (excluding PS4) via their own Facebook contest with no purchase requirements. But enter fast as the contest ends today / 10 December 2018. 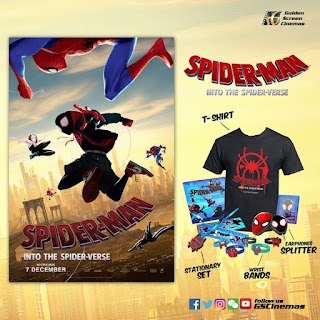 For customers who have got at least two tickets, GSC is offering a limited edition 1:4 scale Spider-Gwen statue worth SGD900 / RM2,735 via another Facebook contest. Find out more on this premium collectible from XM Studios and join before 23 December 2018. 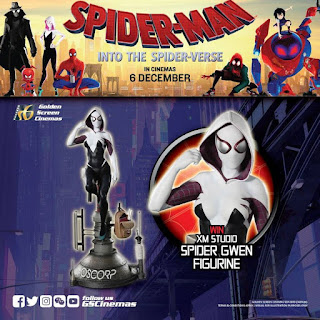 Over at MBO Cinemas, loyal Allstar members can make use of their points to redeem movie premiums once they have purchased minimum 2 tickets. Go ahead and redeem online at the URL links provided. 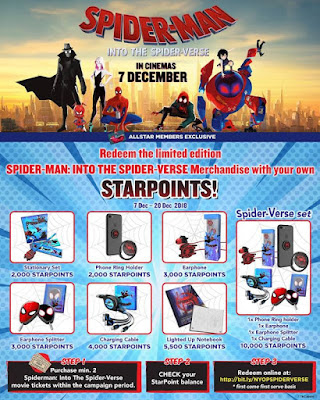 Plus mini-portable speakers may be redeemed for 5000 points at selected locations only. 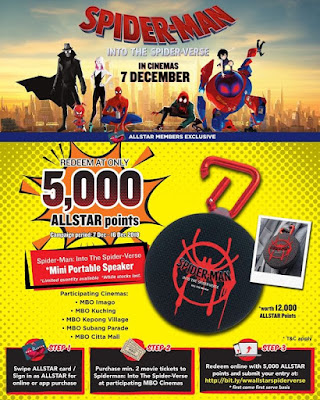 So don't forget your web-shooters and swing into your friendly neighbourhood cinema to catch Spider-man: Into the Spider-Verse showing NOW!