Maze Runner: The Death Cure Comes Within Reach of WCKD 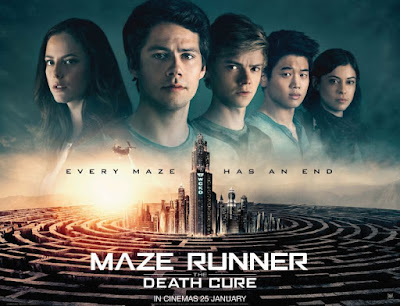 The Maze Runner Trilogy concludes this week in cinemas with The Death Cure. Based on young adult fiction books by James Dashner, the film adaptations were launched in 2014 with The Maze Runner, followed shortly by The Scorch Trials in 2015. The Death Cure was intended to release in February 2017 but was delayed almost a year due to an accident during production involving lead star Dylan O'Brien. Maze Runner movie fans in Malaysia will finally be able catch the Gladers back in action from 25 January 2018 and brace for the final showdown against WCKD.

Official Movie Synopsis
In the epic finale to the Maze Runner saga, Thomas leads his group of escaped Gladers on their final and most dangerous mission yet. To save their friends, they must break into the legendary Last City, a WCKD-controlled labyrinth that may turn out to be the deadliest maze of all. Anyone who makes it out alive will get answers to the questions the Gladers have been asking since they first arrived in the maze.

Before heading into The Death Cure, it is highly recommended to watch the first two movies: The Maze Runner (2014) and Maze Runner: The Scorch Trials (2015). Check out this 90 second recap by the cast or read the Outpost recap below: 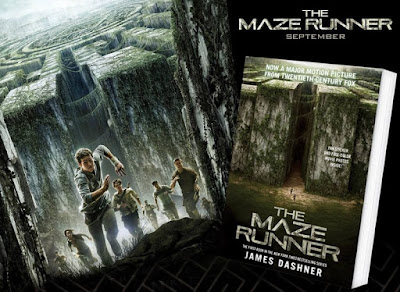 The first movie introduces our lead protagonist, Thomas (Dylan O'Brien), who is thrown into The Glade, a (relatively) peaceful patch of forest and fields surrounded by unscaleable walls of the Maze. The Glade is populated by teenage boys since 3 years ago with a new inmate, crudely labelled as a “greenie”, brought in every month by a mysterious elevator. Viewers learn about the morphing Maze and life in the Glade through the eyes of Thomas, who soon becomes a Runner. The Maze Runners explore the maze everyday in attempt to map it and find an exit. Runners can only enter during the day as come nightfall the Maze closes and anyone trapped inside do not survive. That is until Thomas does survive and also saves fellow Gladers Minho (Ki Hong Lee) and Alby (Aml Ameen). 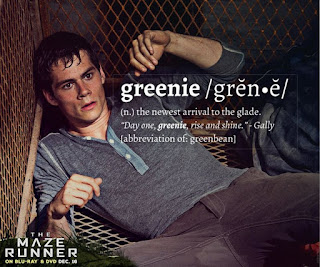 Life in the Glade soon turns topsy-turvy with the arrival of Teresa (Kaya Scodelario), the first girl and the last greenie, ever. The Gladers are assaulted at night by Grievers, massive techno-creatures on spidery legs with a poison sting inducing madness. Many are killed and subsequently the Gladers are divided between Thomas who intends to escape The Maze, and Gally (Will Poulter) who insists everyone must stay put in the Glade. 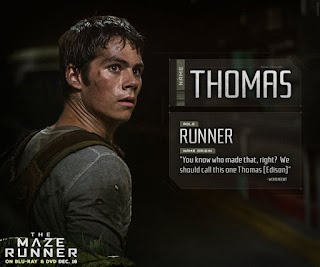 Thomas, Teresa, Newt, Minho, Winston, Frypan, Chuck and other boys enter The Maze and after a deadly battle with Grievers, escape into a WCKD facility. There they find a recording of Dr Ava Paige (Patricia Clarkson) explaining that the Earth has been scorched by a massive solar flare and mankind subsequently afflicted by a deadly pandemic known as The Flare. The Gladers became part of an experiment to find the cure of the lethal virus that transform humans into “Cranks”, living zombies that prey on survivors.

In a final showdown between Thomas and a delusional Gally (induced madness after stung by a Griever), young Chuck is shot and Gally speared by Minho. Everyone is suddenly “rescued” by a tactical military team and ushered into helicopters whisking them over desert wastelands to a safe facility. However the final scene shows Ava Paige very much alive and stating the commencement of “Phase Two”. 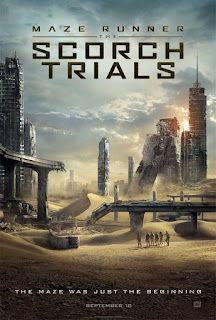 Up next during The Scorch Trials, The Gladers are brought to a safehouse run by Janson (Aiden Gillen) who claims to have saved them from WCKD, short for World Catastrophe Killzone Department. They also find survivors from other mazes at the facility. Thomas soon meets Aris (Jacob Lofland) who suggests that things are not what they seem. Investigating further, Thomas discovers that Janson is actually allied with Ava Paige and WCKD, where the survivors, dubbed “Immunes”, are being experimented on in a secure wing of the facility in attempt to find a cure to The Flare virus.

Thomas, Avis and the other Gladers quickly escape the facility, running in the scorched desert. Whilst scavenging provisions from an abandoned shelter, they soon encounter the virus-transformed Cranks and so begins another mad run to escape. Fortunately the movie did not devolve into a typical “zombie” flick once the Gladers outrun the Cranks. However, whilst crossing the scorched desert, Winston (Alexander Flores) is forced to end his own life instead of succumbing to The Flare.

The Gladers soon discover a small refuge of humans lead by Jorges (Giancarlo Esposito) and his ward, Brenda (Rosa Salazar). Their presence is soon revealed to WCKD who send-in tactical assault teams to retrieve the Immunes. With the help of Jorges and Brenda, the Gladers escape but are separated. Unfortunately Brenda is infected whilst on the run from Cranks with Thomas. The gang reunites and heads into the mountains seeking The Right Arm, a resistance group rescuing Immunes from WCKD.

Brought to the Right Arm's camp, Thomas is recognised by Mary Cooper, a former WCKD scientist who explains that the prospective cure to the Flare can only be harvested from Immunes and not manufactured. However, a true Cure has yet to be found as the harvested enzyme is only able to prolong the infection before transformation into a Crank. Mary extracts this enzyme from Thomas and administers it to Brenda, receding the infection.

The movie ends with WCKD ambushing the camp and kidnapping many of the Immunes when Teresa betrays the camp location. Amongst the Gladers, Minho is captured and flown away by WCKD together with Teresa. Although they have the opportunity for escape to a safehaven, Thomas opts to remain vowing to save Minho. 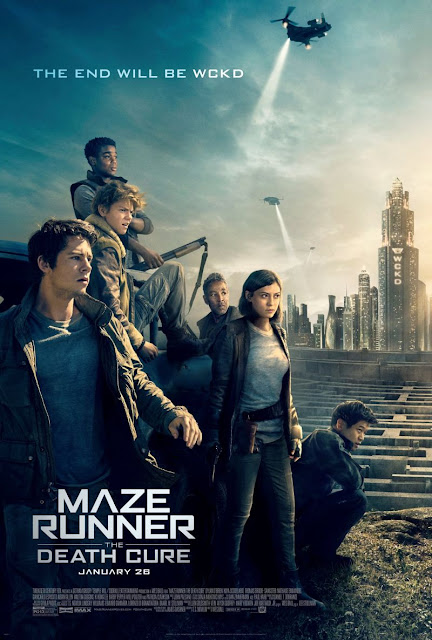 Setting the scene for this third and final instalment The Death Cure, Thomas and his band of Gladers together with Jorges, Teresa and Vince have been tracking down WCKD's movement of the Immunes for some months. No secret from the movie trailers, Thomas and friends hit a WCKD "shipment" train of Immunes in attempt to rescue Minho.

Without delving into SPOILERS, Thomas' mission ultimately leads him to the Last City, a WCKD stronghold where Ava Paige and Teresa relentlessly seek a cure for The Flare. To protect against Cranks, the WCKD city is surrounded by an impenetrable wall and defensive weapon emplacements. Unfortunately many survivors of this post-apocalyptic Earth are also not welcome into the fortress city, leading to much resentment amongst the populace in the surrounding squatter settlements.


To face off against WCKD's hi-tech forces led by Janson in the Last City, Thomas and friends are forced to seek help from other rebels and unexpected allies.

Overshadowing their respective struggles is a reflection of humanity in this question posed by Ava Paige to Thomas (as seen in the trailers): “You can save your friends, or you can save us all.” Although WCKD can easily be seen as the evil corporation, their mission is to find a cure to save mankind from extinction and to do so without constrained by ethics.


So to quote Star Trek's most logical Vulcan Mr Spock, do “the needs of the many outweigh the needs of the few, or the one”? Watch Maze Runner: The Death Cure and decide an answer for yourself.

The surviving cast from The Scorch Trials return in The Death Cure, but who will survive this final Maze? It's almost certain not everyone will so check out this fun video of the main cast audition from the first movie before they take their final race to the end as Runners:

Also look for photos of this #GSCdeathcureparty at the Outpost Productions Facebook Page.


Snapshots from the Global Fan Screenings across the planet.

Thanks to 20th Century Fox Malaysia, we were able to send an Away Team to this Super Fan Screening and provide this early review of the movie, presented by our resident Vulcan Cultural Officer Mr Smock and special guest Vocaloid geek gal Hayashiforest:


Stay tuned to the end of this review to find out how to win a handy movie premium.

For Maze Runner fans who like to take home movie merchandise, the Outpost Movie Recon Team (M.R.T.) has sourced these goodies: 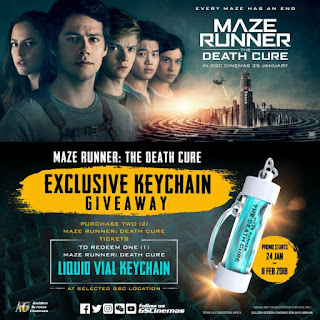 Firstly GSC Cinemas is offering an exclusive Death Cure Vial keychain with purchase of two (2) Maze Runner: The Death Cure tickets at selected cinemas. Check at the GSC website to find out which locations to find this cure and head over soonest before stocks run out. Always handy in case of infection by The Flare! 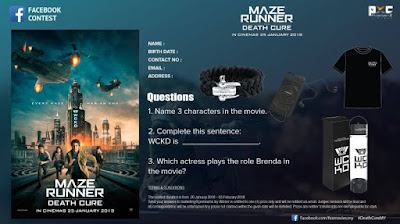 Amongst the cinema chains, at time of this posting only Premium-X in OneCity USJ is offering movie premiums to giveaway. Follow instructions from their Facebook Page and submit entries by 5 February 2018. 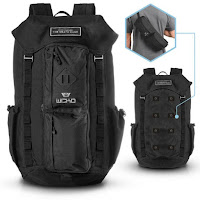 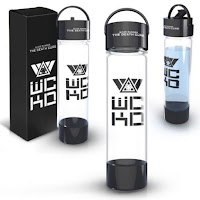 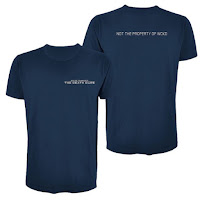 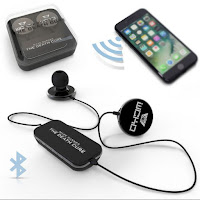 To experience running to survive the Maze, two App games are available for smartphones and tablets based on the preceding movies. Look for The Maze Runner and Maze Runner: The Scorch Trials on iOS and Android. 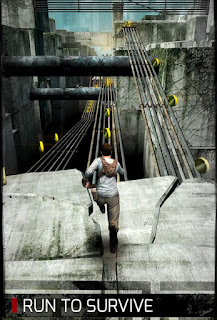 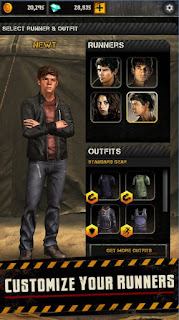 Run the Maze as your favourite Gladers to beat the clock.

The Death Cure is the last movie / book in a trilogy, but hardcore fans of this young adult dystopian future can look for the prequel novels titled The Kill Code and The Fever Code. Find out more about these books from the official website of author James Dashner.

Maze Runner: The Death Cure coming to Malaysian cinemas shortly on 25 January 2018. The movie run time is 142 minutes, the longest of the trilogy, so prep warm clothing and snacks as well as empty bladders beforehand, or risk getting "cranky": 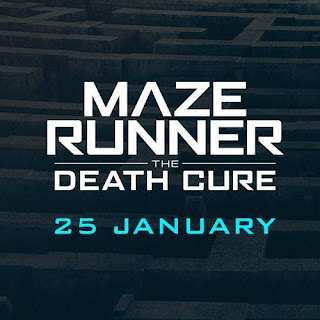